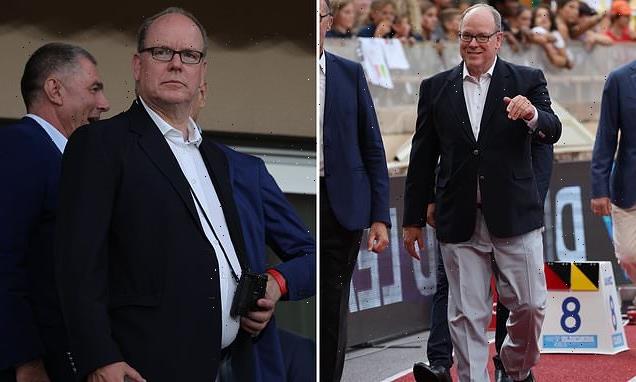 Prince Albert of Monaco cut a smart figure as he attended the Herculis International Athletics meeting at the Stade Louis II yesterday.

The 64-year-old royal, who is married to former Olympian swimmer Princess Charlene, 44, donned a dapper navy blazer and grey trousers for his solo appearance in Monaco.

He was all smiles as he waved to the crowds at the grand stadium, where the event, part of the Diamond League series, is being held. 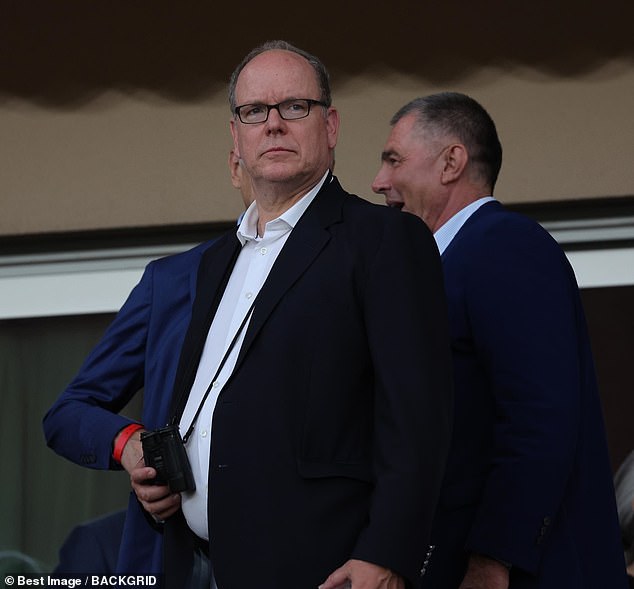 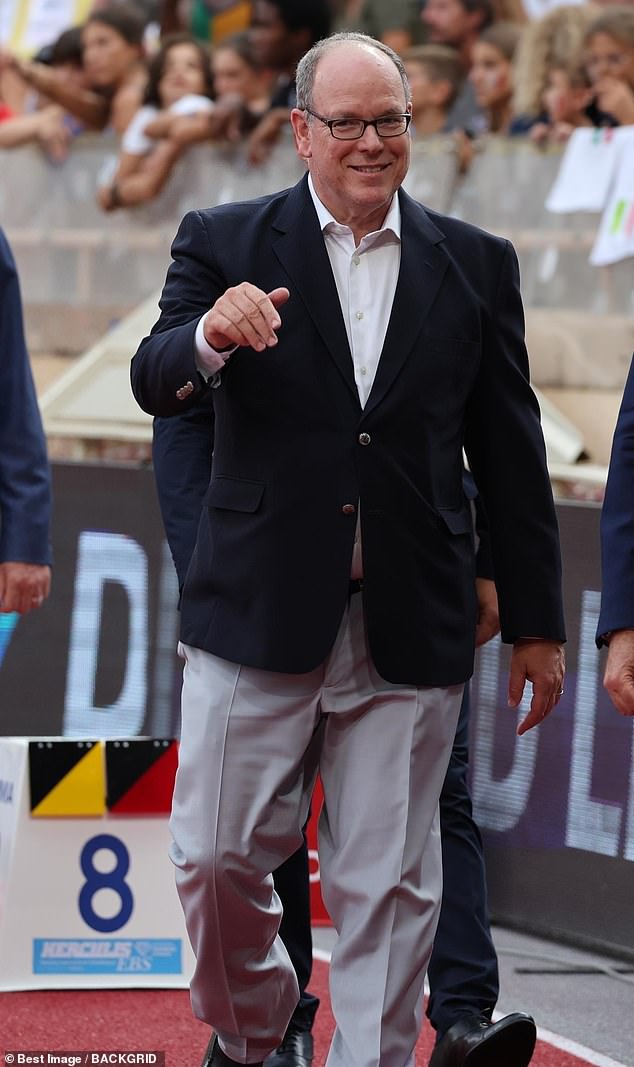 The 64-year-old royal, who is married to former Olympian swimmer Princess Charlene, 44, donned a dapper navy blazer and grey trousers for his solo appearance in Monaco

Sitting in a spectators box, the keen sportsman – who competed in bobsledding at the Winter Olympics five times from 1988 to 2002 – held a pair of binoculars as he watched the athletics.

Last month, Albert and Charlene attended a private audience with Pope Francis at the Vatican.

The mother-of-two could be seen bowing her head as she walked through the San Damaso courtyard with her husband following the meeting. 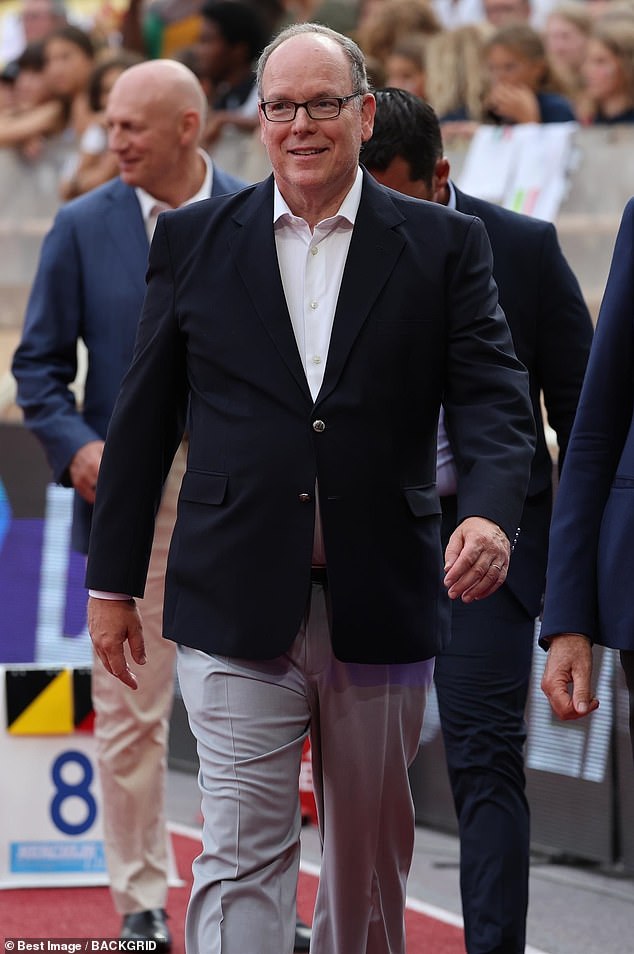 He was all smiles as he waved to the crowds at the grand stadium, where the event, part of the Diamond League series, is being held 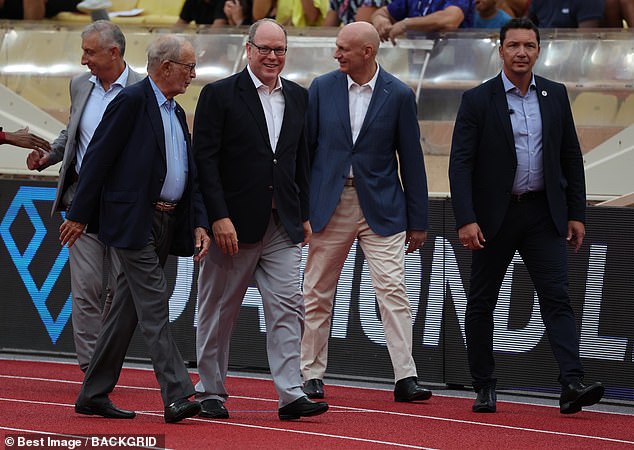 Normal protocol for papal audiences require that ladies wear a long black dress with a high collar and long sleeves, and a black mantilla.

However visiting the Vatican, the Charlene appeared to wear a strapless black gown with a boat-necked sheer top for the occasion.

The visit came as the royal, who was born and raised Protestant but converted to Roman-Catholicism ‘of her own free will and choice’ in April 2011, continues her return to public life after an 11 month absence last year.

Earlier that month, she joined Albert at the 73rd Red Cross Gala in Monte Carlo  – having previously missed the Monaco Rose Ball, which is one of the highlights of the principality’s social calendar.

It’s not the first time Charlene has worn something which bucked the normal tradition. 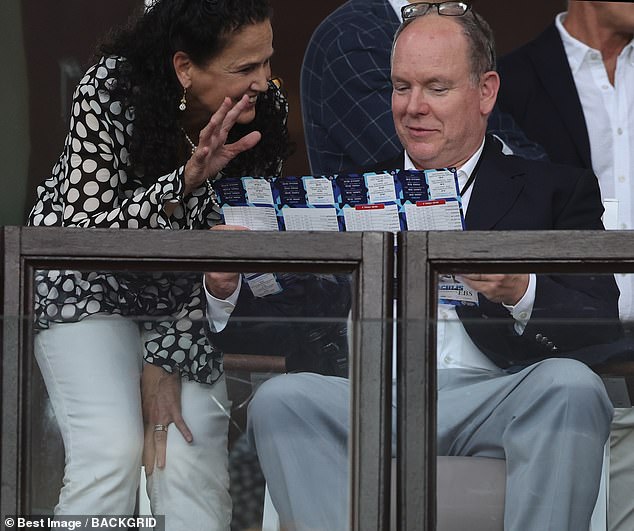 Sitting in a spectators box, the keen sportsman – who competed in bobsledding at the Winter Olympics five times from 1988 to 2002 – held a pair of binoculars as he watched the athletics

In 2016, she visited the Vatican in an all-white outfit as it was revealed she is one of only seven people allowed to don the colour while meeting Pope Francis.

Called le privilége du blanc in French or il privilegio del biacno in Italian, the special tradition is extended solely to designated Catholic queens and princesses and is usually reserved for important events at the Vatican such as private audiences, canonisations, beatifications and special masses.

Princess Charlene is bestowed this privilege, along with Queen Sofía of Spain, Queen Paola of Belgium, Grand Duchess Maria Teresa of Luxembourg, Queen Mathilde of Belgium, Queen Letizia of Spain and Princess Marina of Naples.

Charlene’s first state visit to the Vatican was in January 2013 along with Albert.

The royal couple’s visit marked the 55th anniversary of the meeting of his parents, Prince Rainier and Princess Grace of Monaco with Pope Pius XII in 1957.

The royal said the ‘experience was extremely intense and moving for me’. 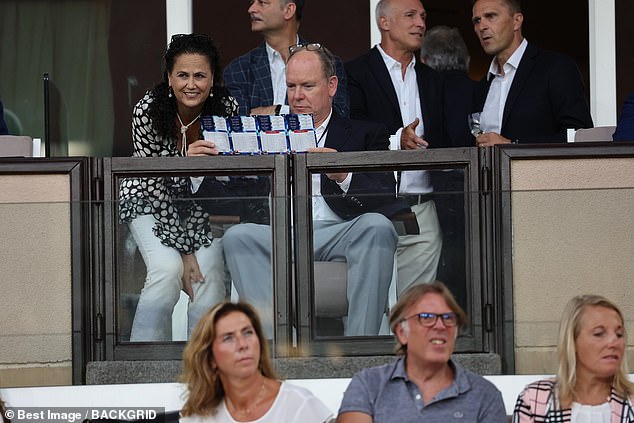 The couples visit in July comes as Charlene continues to slowly re-enter royal life after largely remaining out of the public eye over the last 18 months.

Rumours have swirled that she is receiving £10million a year to appear at her husband’s side at official engagements.

She spent 10 months in her native South Africa last year after contracting a sinus infection that later required surgery.

She returned to Monaco in November but was there for a matter of days before leaving for a Swiss treatment facility. The exact nature of her condition was not made public but Albert said she was ‘exhausted’.

Since returning once again, the mother-of-two has made a handful of appearances including a recent solo engagement to a maternity ward.

Charlene and Albert’s relationship has come under enormous scrutiny in recent months. 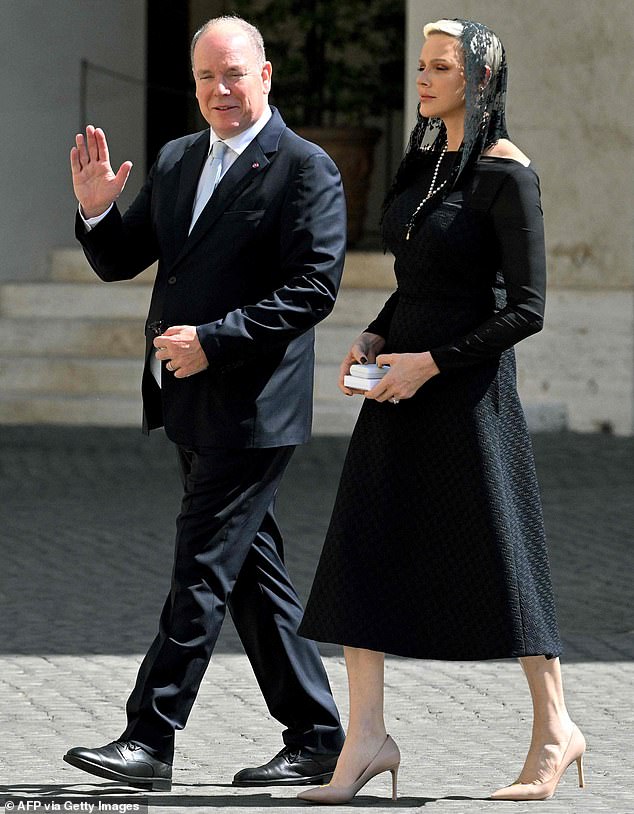 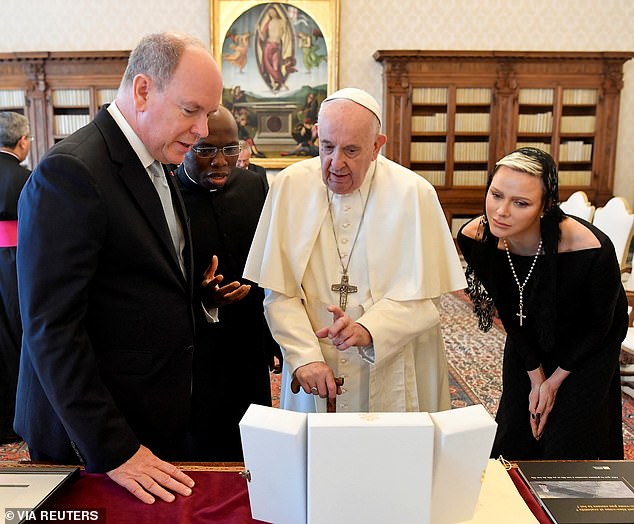 Inside the Vatican, Prince Albert and Princess Charlene could be seen speaking with Pope Francis during the private audience

Prince Albert said he was ‘hurt by the vicious rumours’ peddled about his marriage following his wife’s absence and said that it’s the ‘most beautiful thing’ to have her back with him.

‘But the Princess did not return at any price,’ magazine Voici reported. ‘She would have had her husband sign an ultra-confidential contract.’

The revelations were followed up by rival publication Paris Match Belgium, which wrote: ‘Prince Albert would himself pay a tidy sum to the princess so that she appears at his side at public events.’

The Royal Palace in Monte Carlo refuses to discuss specific financial arrangements, but the principality pays out some £40m a year to cover the institution’s running costs.

Royals are not salaried officials, however, meaning that Charlene would be reliant on Albert – a billionaire in his own right – for her own spending money. 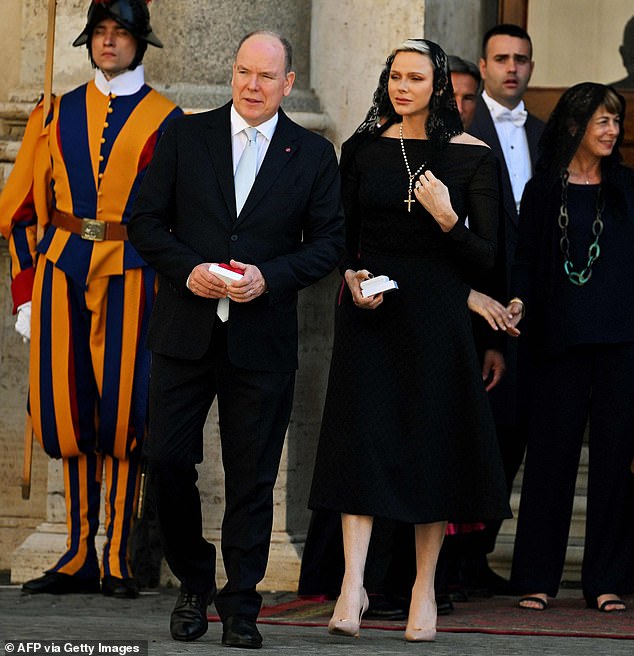 A Royal insider based in Monte Carlo told Mail Online: ‘Of course the Princess enjoys huge perks, but ready cash is not guaranteed. She’s been through a very difficult time, so it would make sense for Charlene to try and secure her own guaranteed income.’

Prince Albert said the time apart was ‘a test for his wife’ but they ‘spoke often, despite the distance.

Charlene first had a 10-month absence in her native South Africa, where she contracted and was hospitalised for a serious sinus infection that delayed her return to Monaco.

After her return to the principality in November, Charlene left almost immediately to receive treatment for ‘exhaustion’ at a Swiss clinic.

The Monaco palace has consistently denied media reports of a rift between Charlene and the principality’s ruler Prince Albert, who were wed in 2011, following the princess’ long absence.

Speaking to French Sunday paper Journal de Dimanche last month, Albert said the last year was ‘a test for my wife especially, who suffered greatly and lived through difficult times, far from her family. A test also for our children and for myself.

‘We missed the princess a lot. And we were obviously hurt by the malicious rumours that were peddled. But we were able to stay united despite the distance, we spoke to each other often.’

He added:  ‘Today, Charlene is back with us and this is the most beautiful thing which could have happened. She’s better, we can finally spend time together. It is a relief and a joy for all of us.’

Princess Charlene met Prince Albert in 2000 during a swimming competition in Monaco and the pair married in 2011, before welcoming twins Gabriella and Jacques in 2014.

However the pair’s marriage has made numerous headlines over the years, with a third paternity suit emerging in December 2020.

Soon afterwards Charlene famously shaved half her head in the style of a punk rocker. Months later she left for South Africa.

The allegations in December 2020 claimed that Albert had fathered a love-child (which would be his third, if proven) with an unnamed Brazilian woman during the time when he and Charlene were already in a relationship.

He has also fathered two other children outside of wedlock. Jazmin Grace Grimaldi, who is now 29 and the result of Albert’s affair with an American estate agent, and Alexandre Coste, 18, whose mother is a former Togolese air hostess.

Both children were struck off Monaco’s line of succession in return for vast financial settlements.

January 27 – Charlene is pictured with Albert for the Sainte Devote Ceremony in Monaco.

March 18 – Charlene is pictured at the memorial for the late Zulu monarch, King Goodwill Zwelithini at the KwaKhethomthandayo Royal Palace in Nongoma, South Africa

April 2 – Charlene posts an Instagram picture of herself, Albert and their twins Jacques and Gabriella for Easter.

It is unknown where the image was taken.

May 8 – Albert, Jacques and Gabriella attend a Grand Prix event in Monaco without Charlene

May 10 – Albert attends Monaco Gala Awards in Monaco without Charlene

June 3 – New photos emerge of Charlene on her conservation trip

June 24 – Charlene’s foundation releases a statement saying the royal is unable to travel and is undergoing procedures for an ear, nose and throat infection

July 2 – Charlene and Albert mark their 10th anniversary separately. ‘This year will be the first time that I’m not with my husband on our anniversary in July, which is difficult, and it saddens me,’ Her Serene Highness Princess Charlene said in a statement.

July 3 – Albert appears with glamorous niece Charlotte Casiraghi at the 15th international Monte-Carlo Jumping event, which is part of the Longines Global Champions Tour of Monaco,

August 13 – Charlene undergoes a four-hour operation. The reason is not announced

September 2 – She is discharged, with a statement from the Palais Princier reading: ‘Her Highness is closely monitored by Her medical team who said that Her condition was not worrying’

November 8 – Charlene arrives back in Monaco. Prince Albert said within hours it became clear she was ‘unwell’

Following his return from the trip, Prince Albert holds an intervention with Charlene’s brothers and a sister-in-law in which Charlene ‘confirmed’ she would seek ‘real medically framed treatment’ outside of Monaco

January 25 – Charlene celebrates her birthday alone outside of Monaco

March 14 – The royal palace announced Charlene had returned to Monaco.

May 18 – Prince Albert takes twins to Disneyland without Charlene

May 29 – Charlene and Albert appear together at Monaco F1

June 22 – Charlene and Albert take their children to Oslo, Norway