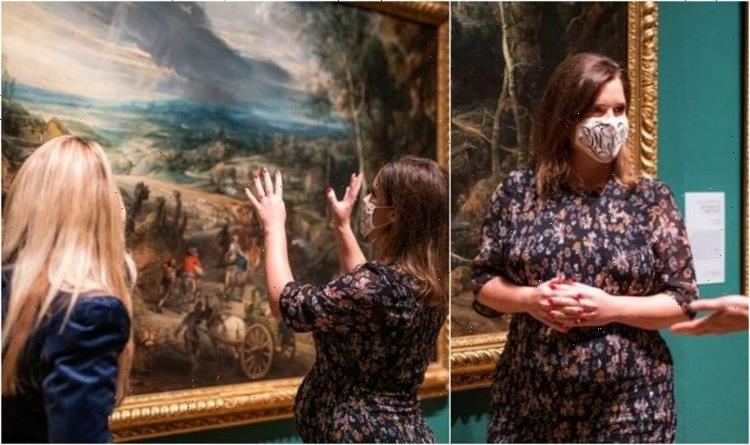 She told Kate: “I wanted to be an artist, definitely, but the extent of my art was papier-mache presents for my parents at Christmas and birthdays!

“When it comes to the art that we’re sitting amongst today, it’s something that I’ve grown up with.

“You don’t realise the extent of the masterpieces that are here until you get your education.

“So for me, I did History of Art at school as well, and I learned about these greats that we’re sitting with today.

“At school, History of Art was so exciting because all of a sudden you learn about these incredible books!

“I actually studied a painting from the Royal Collection at school. It was by Frederic Zuccaro, and it’s called the ‘Calumny of Apelles.’”

The interview will be an hour-long tonight on Sky Arts so royal fans can access the entire conversation between Princess Eugenie and Kate Bryan then.

Body language expert Judi James spoke to Express.co.uk about Princess Eugenie’s mannerisms when discussing the art within the Queen’s Gallery.

Judi said: “Eugenie’s gesticulation here is both modest and expressive.

“She offers opinions or talks about her own experience with art in a way that looks part-timid and part enthusiastic.

“Either she is mirroring her interviewer or it’s the other way round, but it looks as though it might just be Eugenie mimicking Kate’s form of gesticulation in a bid to create rapport.

“Her hands are used a lot here and at times they are thrown open in a gesture of engagement but her upper arms tend to remain close to her torso.

“Genuine confidence is usually signalled by the gap under the armpits so by keeping this area closed Eugenie seems to be self-diminishing, showing a desire to communicate expressively but also a desire to bow to the higher authority in terms of experience and knowledge.

“It also suggests a strong desire to be liked.”

Her post read: “I had the privilege of recording an episode for Sky Arts at Buckingham Palace in The Queens Gallery talking about the magnificent exhibition ‘Masterpieces from Buckingham Palace’ on view now until 13 February 2022.

“I spoke to Kate Bryan all about what art and these artworks, in particular, mean to me. Tune in tonight at 8 pm on Sky Arts to see the show and go see the remarkable exhibition whilst you can.”

One royal fan commented saying: “This is such an awesome exhibition for you to champion on behalf of Her Majesty given your professional background in art! A merging of two loves for you.”

Princess Eugenie gave birth to her first child August Brooksbank in February earlier this year, with her husband Jack Brooksbank.

Eugenie and Jack tied the knot in October 2018, and the couple are now residing in Frogmore Cottage, the former UK residence of Prince Harry and Meghan Markle.