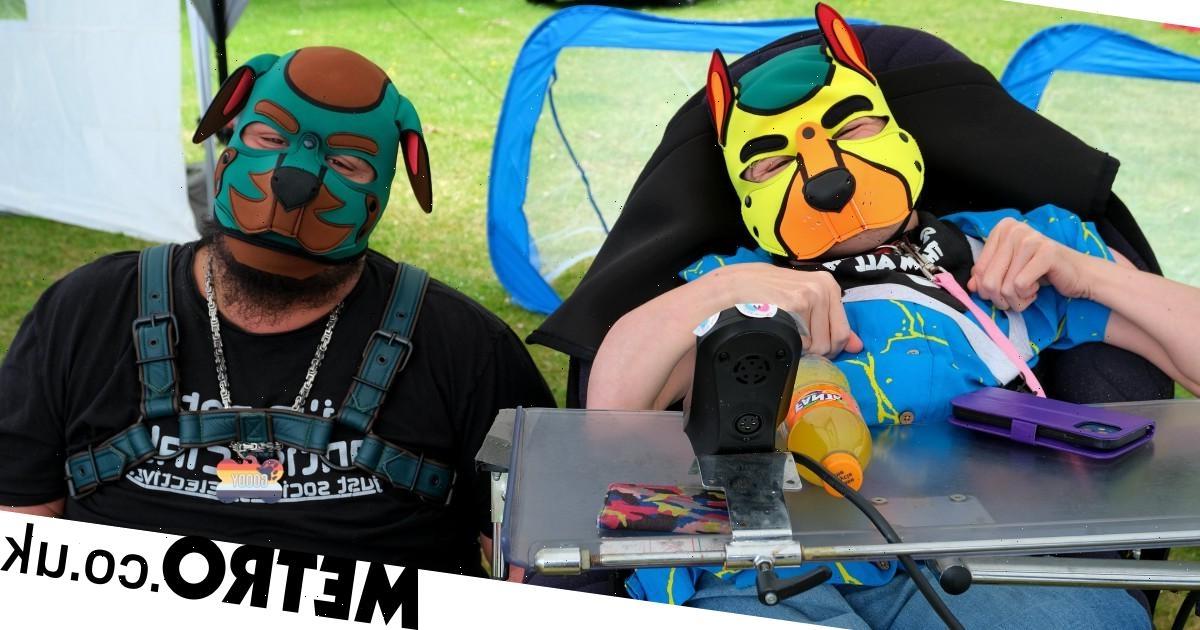 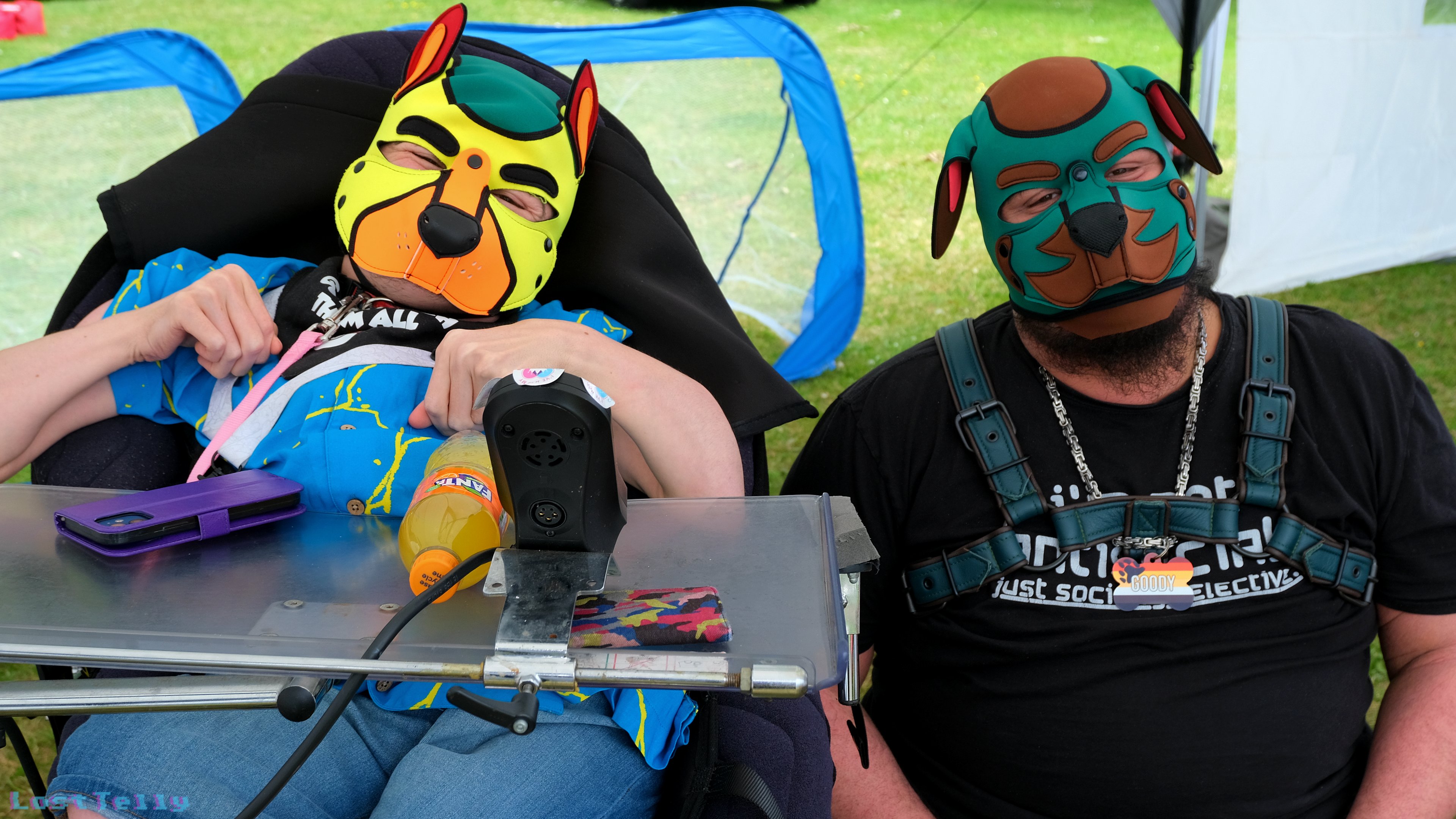 The moment my alpha, Butch suggested both him and my partner, Goody give me a bath was really exciting.

It was the moment I truly knew they both really cared about me.

I have osteogenesis imperfecta – which means that my bones break much more easily – so I use a wheelchair. I haven’t had a bath in decades because I find wet rooms easiest for me, so I was a little bit nervous.

Once I was in the bath, they both rinsed and scrubbed me from head to foot. Goody cut my toe nails and Butch brushed my teeth and shaved my pubic hair. I felt so relaxed.

I kept accidentally splashing Butch though because baths are incredibly slippery for me so I spent a few minutes trying to keep a good grip of the handrails. He didn’t mind though and we all laughed it off.

This was one of the few times in my life where I felt true, unconditional love.

But who are the two guys giving me the bath? My fiancé and my alpha.

Let me explain the latter. I’m part of the puppy play community, which is a group of people who dress like dogs and take on a different persona with a different name. Some treat it as a sexual kink, while others care more for the roleplay aspect.

I got into it at the end of last year through a friend who thought it could be a great fit for me. I was a little apprehensive at first but I went to my first event and absolutely loved it.

I got belly rubs, participated in silly games and exchanged contact details with some of the people there. Ever since, my confidence has soared – especially when embracing my pup name and persona, Wheely.

I started speaking to Butch last October through Twitter messages. He has fibromyalgia – a condition that, among other things, stiffens muscles and causes problems with memory and concentration – and he needed some advice on whether he should class himself as disabled because of it.

We then talked on and off for a while about things – including narrowboats, his love of baking and generally checking up on each other. He was really encouraging in my first months engaging in puppy play.

He and I had hoped to meet in a hotel in London in January, but we had to postpone it until 21 April due to Covid-19. I had planned to spend my birthday in London anyway, so everything lined up really well.

No matter what the future holds, we’re taking things steady

He met me at Euston station before we headed to the hotel. He was really sweet, and I really appreciated him meeting me there.

I was a bit shy, but he talked a lot about the history of some of the buildings we passed on the bus, and a trip he had in a boat from King’s Cross. The passion he had when he was talking really made me smile, and it made me fall for him.

We spent the night being really intimate and sexually active, which was the most incredible feeling.

We role played as pups for a while, he rubbed my belly and we hugged a lot, before having sex. It felt wonderful to explore things sexually that I didn’t think were possible.

After we said goodbye to each other, I was a little upset as I didn’t want to leave, but I was so happy that we connected as well as we did.

I held off on asking him out again as, earlier that same month, I had started speaking to another pup.

I went to a pup event in London, but I was tired as I’d travelled four hours that morning to get there. I was nervous as it was my first event of theirs and I only knew one or two people in attendance.

At the time, I didn’t know Goody was there; we never made eye contact that day due to our own anxieties. I only knew the next day, as he reached out on Pupspace – a social media platform specifically for pups and people who are interested in puppy play.

We were generally playful and flirty in messages. We also had a lot in common and talked about gaming: video games, card games and board games.

Within two weeks, I told him I loved him, even though we’d not technically met yet but he was hesitant to say it back as he had ended a relationship shortly before we spoke, and he didn’t want to commit so quickly.

We decided to meet up at a hotel in London on the 22 April – my birthday, and the day after I’d spent the night with Butch.

As soon as we started cuddling, I asked him to be my boyfriend and he agreed. I was so delighted, and he made it the best birthday ever.

Goody and I decided on an open relationship because my disability means that my movements are a lot more restricted, so it’s best for him to pursue his sexual needs elsewhere.

I announced our relationship on Twitter. All of our friends were delighted for us, especially Butch, while Goody was happy that Butch and I were still friends.

And while I wanted to ask Butch out at the same time, I held myself back for a month as I wanted to focus on my new relationship with Goody.

Our pack came together in late May when Goody and I created a Telegram group chat – a social network similar to WhatsApp – for the three of us to connect properly. We all got on so well that we didn’t really need to have a conversation about Butch being our alpha; everything came together naturally.

Primarily, an alpha is a supportive, protective role in a pack. Butch supports us whenever Goody and I are struggling individually with our mental health, or if we have a sticking point in our relationship. A romantic, intimate connection isn’t necessary to be an alpha, but I feel that connection strongly with mine.

On 10 June, the three of us met up for the first time that weekend in London where they gave me the bath. We all got on together really well, really quickly. We were intimate, snuggled together and spent hours watching shows like Disenchanted on Netflix.

Later that month, Goody travelled down to near where I live for Stoke-on-Trent Pride.

It was amazing to spend time with him, and I really appreciated that he was willing to travel to see me. We spent most of the day in our pup outfits – it was a really fun, but a wet and tiring, day. On that particular day, I wore a blue Pokémon shirt and blue jean shorts as well as my green and yellow pup hood, while Goody wore a black T shirt, grey shorts and a green harness over his chest with his green and brown pup hood.

Goody and I went to Cambridgeshire the day after Pride to spend two days together with Butch.

He gave us both dog tags to symbolise our coming together as a pack – I was on top of the world and to have that connection with the two people I loved the most was wonderful.

Ever since, our triad relationship together has gone from strength to strength.

Because all of us live so far from each other (me in Stoke, Butch in Cambridgeshire and Goody near London), I miss them so much when we’re apart.

However, we all talk to each other daily through Telegram separately and in our own group chat.

By August, I knew that I wanted to spend the rest of my life with Goody so I decided to do something about it.

During a pup event in London with both Goody and Butch, I had planned a short speech highlighting how much I loved Goody before I proposed. But I was incredibly nervous, and by the time I found the courage to propose, Butch was ready to go home. I really wanted him to be there for it, so I quickly grabbed the box with the ring in, opened it up and popped the question.

We were really glad that our pup friends were there to support us and comfort us, as we were both overwhelmed after he said yes.

Butch was really happy for us, so much so that he cried a little bit. As much as I love them both, I felt that my relationship with Butch was in a good place, while I wanted that little bit more with Goody.

Goody and I arranged to spend Christmas together, then I spent time with Butch for two days from 28 December. All three of us are also hoping to go on a week-long narrowboat holiday next year.

No dates are planned for the wedding yet though; Goody and I want to move in together first, (I’d love for all three of us to be together eventually) and see how things go before that happens.

We hope to get married in a year or two, with Butch possibly living with us in around five years.

As a disabled person, the last few months have made me feel more love than I’ve ever felt before. To have the two most incredible people as partners, lovers and best friends has been unforgettable.

No matter what the future holds, we’re taking things steady, enjoying any time we get together and supporting each other however we can.