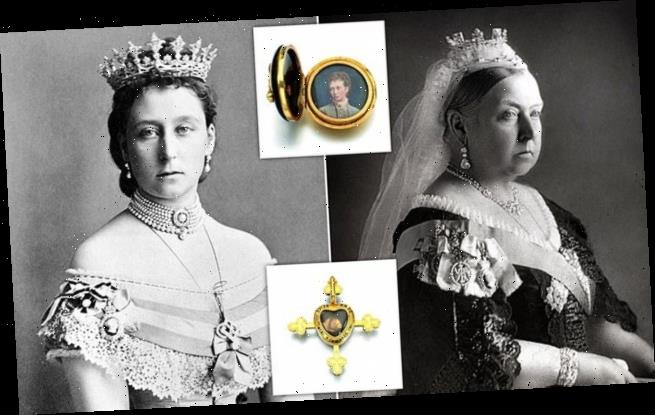 Queen Victoria’s mementos of her daughter Princess Alice who died at 35 including a locket and a brooch containing hair are expected to fetch up to £3,000 each at auction

Queen Victoria’s jewellery commemorating the deaths of her mother and daughter Princess Alice are to be sold at auction.

The mourning jewels include a button, a brooch and pendants, some containing locks of hair, that ‘brought solace’ to the Queen at her time of loss.

The pieces were passed down through Princess Alice’s descendants to her great-great-granddaughter Patricia Knatchbull, the 2nd Countess Mountbatten of Burma, who died in 2017.

They are to be sold as part of a Sotheby’s auction of her possessions next month. 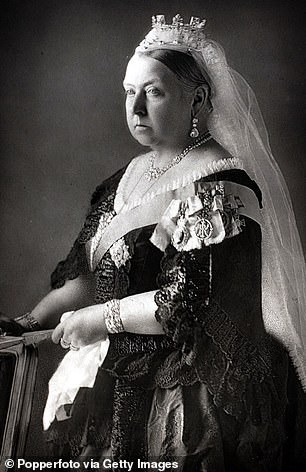 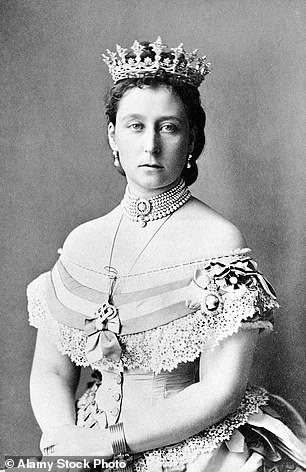 Queen Victoria’s jewellery commemorating the deaths of her mother and daughter are to be sold at auction. Pictured, Queen Victoria (left) and Princess Alice who died in 1878 aged 35 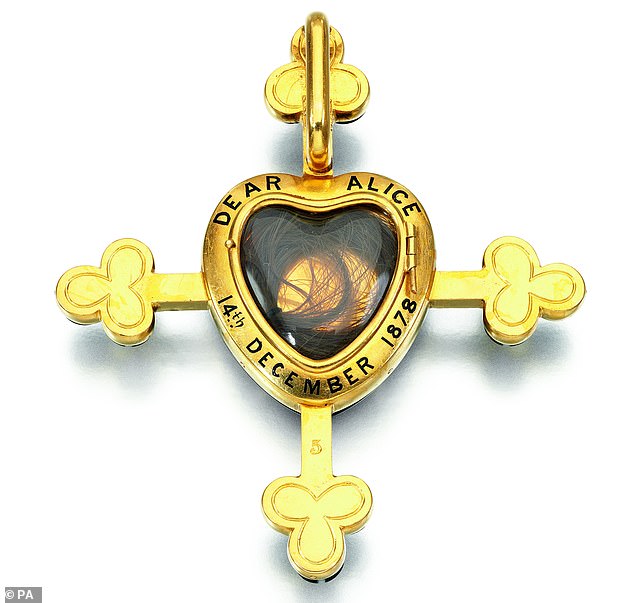 Remembering Alice: A hardstone, enamel and diamond cross centring an onyx heart with Alice beneath a coronet, designed by Robert Phillips c1878, commemorating Princess Alice and containing a lock of hair. The brooch, estimated at £2,000-£3,000, is one of four mourning jewels belonging to Queen Victoria which will be auctioned by Sotheby’s in March

David Macdonald, Sotheby’s specialist and head of sale for the auction, said the items, which have individual estimates ranging from £1,000 to £3,000, are special because of the personal significance they held to Victoria.

‘It’s only when you handle them, you realise they really are treasure with descriptions and the locks of hair… And moreover to have them directly from the hand of Victoria, all the way down.

‘To me, they speak not so much of Victoria, Queen and Empress, but Victoria, mother and wife.’

One of the objects, an agate and diamond pendant, was commissioned by Prince Albert for his wife to mark the death of her mother.

He died the same year he gave her the pendant, which contained a lock of her mother’s hair, a miniature photograph and a ‘touching inscription’ from Albert. 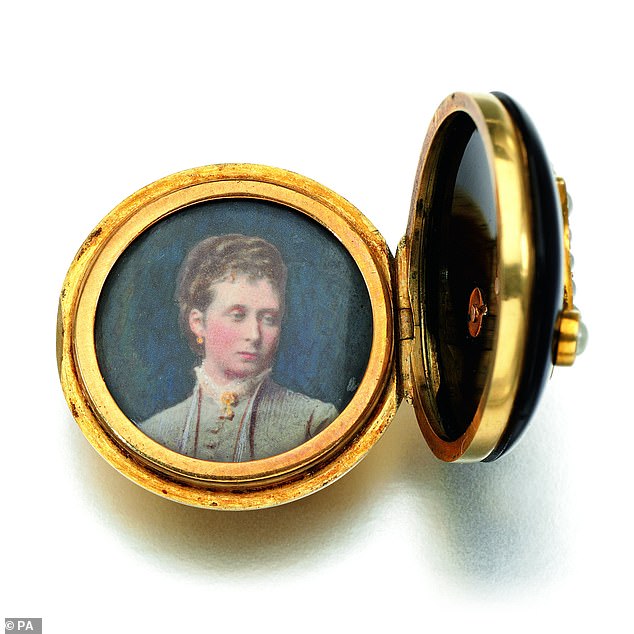 An onyx and seed pearl button circa 1879 commissioned by Queen Victoria to mark the death of her daughter Princess Alice. The button, estimated at £1,000-£1,500, contains a miniature photograph of Princess Alice. It has been passed down through her descendants

A banded agate and diamond memorial locket commissioned by Prince Albert circa 1861 for Queen Victoria to mark the death of her mother, Princess Victoria of Saxe-Coburg-Saalfeld. The locket, estimated at £1,000-1,500, contains a miniature photograph of the Queen’s mother and an inscription by Prince Albert (right) 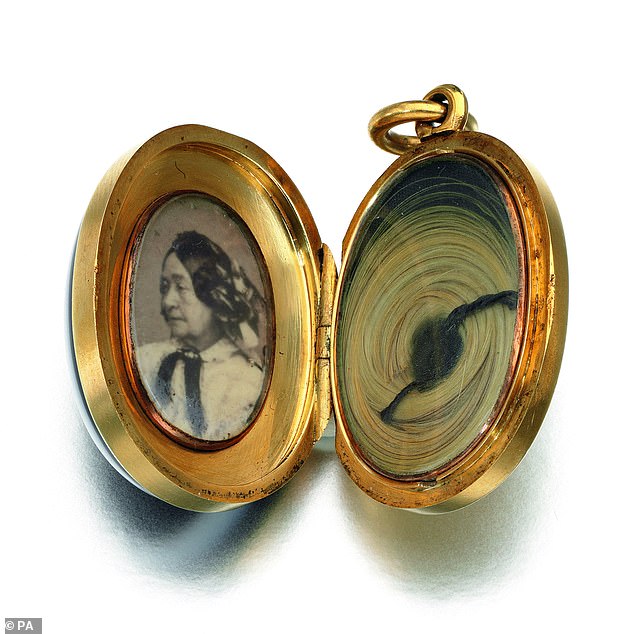 The portrait of Queen Victoria’s mother, Princess Victoria of Saxe-Coburg-Saalfeld, inside the locket. Prince Albert died the same year he gave her the pendant (pictured)

‘So that would have had multiple layers of significance to Victoria,’ Mr Macdonald said.

Pendants and a button commemorate the death of her third daughter, Alice, from diphtheria at the age of 35.

‘They are very biographical,’ Mr Macdonald continued. ‘You think of Victoria and you think of the great jewels of state, the diamonds, the Koh-i-Noor, all these stones.

‘These jewels are much more intimate, their value isn’t through large diamonds bTheir value lies in the full expression, an emotional, deeply personal expression about loss and love.’ 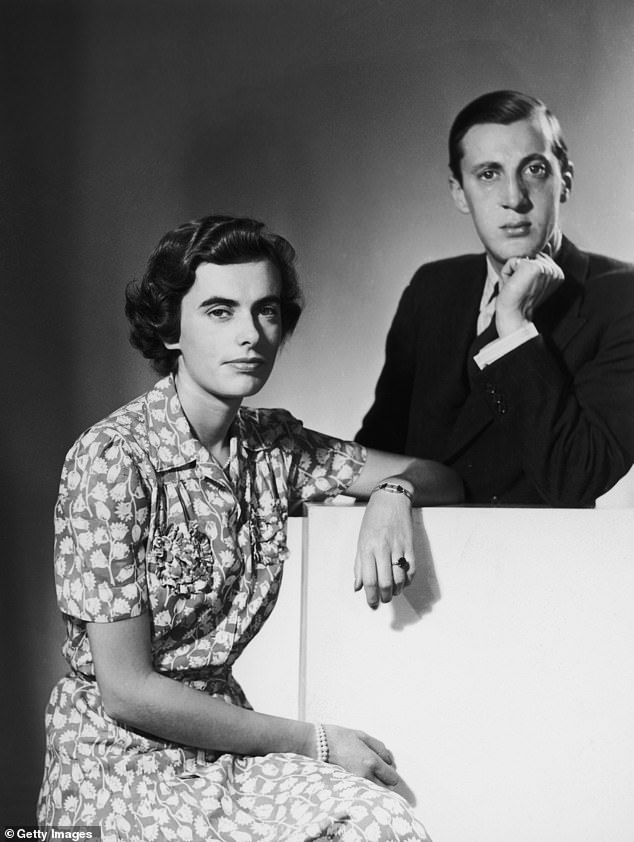 The pieces were passed down through Princess Alice’s descendants to her great-great-granddaughter Patricia Knatchbull, the 2nd Countess Mountbatten of Burma, who died in 2017. Pictured, Patricia Mountbatten with husband Sir John Knatchbull, 7th Baron Brabourne

The objects were kept ‘in a drawer in a family home’.

Mr Macdonald said: ‘Their existence wasn’t known… We came across these whilst working on the auction. So they’re undocumented and a really interesting discovery.’

He added: ‘I’d love them to go to a British institution, a British museum would be wonderful….(or) to end up with someone… who is fascinated by British history, Queen Victoria, and particularly that sort of personal side.’

Sotheby’s London will hold an auction of the collection of Patricia Knatchbull, 2nd Countess Mountbatten of Burma, on March 24 and the lots will be exhibited in New Bond Street from March 20 to 23.