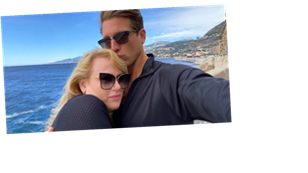 Pitch Perfect actress Rebel Wilson is completely wowing with her transformation at the moment and fans just can't get enough.

Not only has the 40-year-old overhauled her lifestyle, transforming her appearance but she's also landed herself a brand new hunk and appeared to be incredibly loved up.

In a recent adorable post during a trip to Monaco, Rebel even referred to her boyfriend, Jacob Busch, as 'Prince Charming'.

Proving things are getting serious between the pair, Rebel took her new beau along with her to the opening of Miro art exhibition which was also attended by Monaco's Prince Albert II.

Still reliving the pinch me moment, the Australian-born star couldn't resist sharing one more batch of photo's to share her glee.

In the snaps, Rebel looked happier than ever as she paraded her significant three stone weight loss in a raspberry coloured frock with Jacob firmly at her side.

Flaunting her slenderised curves in the elegant attire, that was designed by Badgley Mischka, she completely nailed it.

More strikingly, the dress that plunged low featured rose-swirled sleeves that completely encompassed her shoulders, along with a sassy popped collar.

Rebel's blonde tresses had been pulled up into a sophisticated 60s beehive up do, with a parting fringe that shaped her face.

In one picture the comedian and writer stood in front of a floor length mirror as Jacob stood behind her, capturing the image of them together on his smartphone.

Captioning the images with royalty and her new love, she penned: "Meeting the Prince with a Prince Charming by my side. What a night to remember in Monaco."

Fans could barely contain their excitement and couldn't wait to gush pleasantries.

One said: "Someone give her a tiara."

Another exclaimed: "I still can't get over your transformation. Like how? I could never – too lazy lol."

While another added: "You look stunning and incredibly happy. So beyond the moon elated for you."

Just days prior, their trip kicked off at the Monte-Carlo For Planetary Health where they made their first debut as a couple.

Rebel and the founder of Napps dairy free ice cream, have since uploaded a barrage of adorable snaps which they have shared with their social media followers – now that their relationship is no longer under wraps.

Over the weekend, the pair couldn't seem to keep their hands off of each other as they got cosy together onboard a private yacht as their trip to the French Riviera continues.

One picture showcased Rebel leaning into his chest as he lovingly placed one arm around her while planting a kiss on her head.