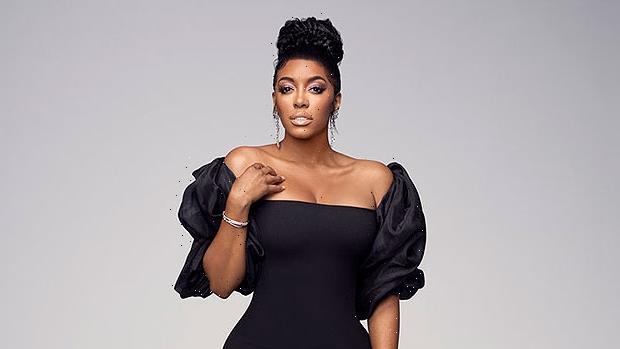 Porsha revealed new details about Cynthia’s bachelorette party during the May 2 episode of ‘RHOA’.

The events of Cynthia Bailey‘s bachelorette party were — and still are — a little hazy, but LaToya Ali and Porsha Williams revealed they may have gotten very close on the coffee table during the second part of The Real Housewives of Atlanta reunion on May 2.

It was mentioned after Andy Cohen brought up the party and said, “There was a lot of talk about the coffee table action.” After everyone started giggling, he asked, “Does anyone care to share what happened on the coffee table?”

“That’s one of the things that were blurry,” Porsha started explaining. She then revealed, “It came back to me that Toya was doing a thing on me, you know, or whatever…”

“Or whatever?” Andy asked, before LaToya jumped in and further asked, “What’s ‘a thing on me’?”

“Your face was here,” Porsha said as she pointed to her crotch.

“My face was there?” LaToya asked, to which Porsha said, “Yes.” LaToya then asked, “Did you like it?” and Porsha again said, “Yeah!”

A post shared by Reality TV Shows & Much More! (@therealitytvsource)

“But I didn’t really remember that,” Porsha explained to Andy. She claims she was told by someone that that’s what happened. She also said, “I still had on my costume, so it’s not like she was [doing anything].” And by that she meant oral sex.

But Andy reminded Porsha that her costume was basically “a piece of dental floss,” so either way, if what they’re saying is true, then LaToya’s face was definitely close to Porsha’s nearly naked crotch area. LaToya agreed, saying, “I could have pulled them panties to the side.”  Porsha got excited by the thought of that, but it seemed evident that no one truly remembered all the details of what went down on the coffee table.

In other reunion news — Kandi Burruss and Porsha opened up about where their friendship stands today. After four years of ups and downs, they revealed that they’re following each other on social media. And when Andy asked Kandi what finally allowed her to “bury the hatchet with Porsha,” she said, “I guess like, this year, it just seemed like, you know, it was headed in a much better direction. We were having a lot more fun together, around each other. And then when we were at Cynthia’s event and she was showing support to DonJuan as well, I was like, ‘Okay, now this is really a different situation.’”

Porsha added, “Even when Kandi and I have issues outside of the group, we’ll talk about it over text and deal with it. And we deal with it and we leave it there.”

Want more drama? The third and final part of the RHOA reunion airs next Sunday, May 9, at 8pm on Bravo.