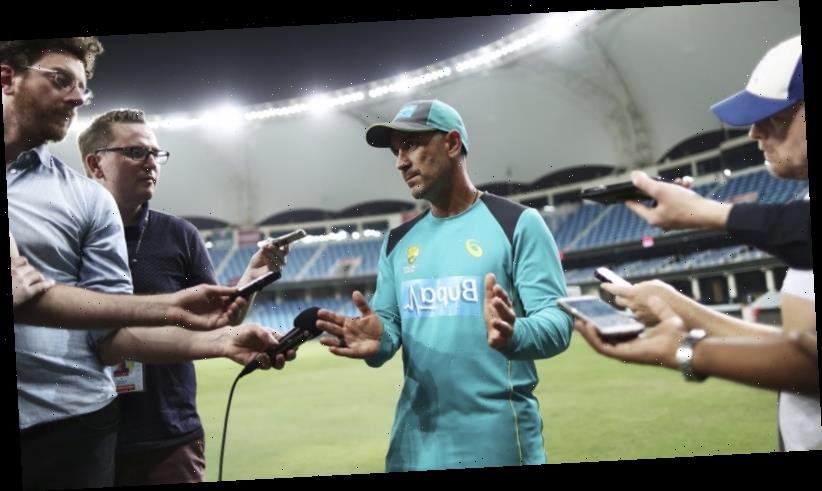 Josh Hazlewood lumbers up to the crease and sends down a thunderbolt whose precision belies the heavy awkwardness of his delivery stride. The ball thuds into English pad. A chorus of baggy greens roars in query, then again in triumph. Embraces and howls of relief all round.

Thus begins Amazon’s new documentary series The Test, at the moment Australia retained the Ashes in England for the first time in 18 years. It was a moment of catharsis for Australian cricket fans that perhaps exceeded even David Boon’s sweep for four that secured the Ashes for Allan Border’s side in 1989 – for this time it wasn’t just the fact the old enemy had been vanquished. This time Australians celebrated both on-field victory and the fact that we had a team we could love again: both propositions that seemed wildly unlikely 18 months previously. Which is where The Test immediately takes us… 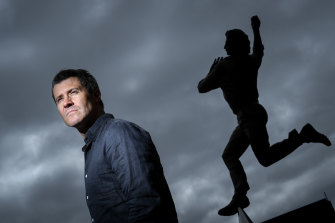 Adrian Brown, creator of the cricket series The Test, at the Melbourne Cricket Ground.Credit:Justin McManus

Langer, of course, was the coach appointed to try to clean up the mess left behind from the events in Cape Town, when an attempt at ball-tampering ended with three players suspended – including captain Steve Smith and star opener David Warner – the team coming apart at the seams, and the nation’s faith in its cricketing heroes crumbled into dust. If there is a central protagonist in the series, it is Langer, delivering fiery speeches in the dressing room, inspiring, cajoling, instilling his troops with the passion and pride he brought to his own playing career.

The program provides unprecedented access to the backstage of Australian cricket, showing the team at moments of joy and at their lowest ebbs – and there were plenty of low ebbs in the wake of Cape Town, from a humiliating pasting on their next tour, a one-day series against England, to crushing defeat in Abu Dhabi, to falling to India in the home summer. But if Cricket Australia – as image-conscious as all major sporting organisations always were – was willing to grant that access, you would expect it, surely, to come with some fairly stringent conditions. 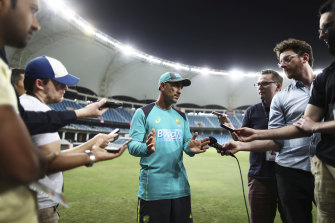 The Test: Justin Langer, coach of Australia, speaks to the media after day five of the First Test match in the series between Australia and Pakistan at Dubai International Stadium on October 11, 2018.Credit:Getty Images

According to Brown, not the case. “I think people will come in with preconceptions that it’s a PR campaign, and I’d love for people to [think that] because over the course of it, it’s just completely honest and you’ll go – oh that wouldn’t be in it if it was a PR campaign.” Of course, after Cape Town there was a widely-acknowledged need for Australian cricket to turn over a new leaf, and if Cricket Australia was smart – which let’s hope they are – they’d know that rejecting insularity would be the only hope of truly rehabilitating their image, and that very honesty is the best PR they could hope for. Brown agrees that the timing was ripe for a filmmaker looking to get a sporting edifice to open itself up. “I think that was an opportunity to go, we can do something different.”

A more serious potential hurdle was getting the players themselves to open up: professional sportspeople are notoriously guarded when it comes to the media, and international cricketers have more reason than most to be wary of cameras and microphones. Allowing a film crew to access their insecurities, the times of fear and doubt and heartbreak that are a cricketer’s lot, must have been daunting. “I think maybe they might’ve been apprehensive, but once we sat down and conducted our interviews, once they sat down and realised we were speaking about the challenges, the frustrations of being a player, what was life like in the bubble … we weren’t looking for a soundbite. Once they realised that, they were fine. I remember asking the players what were your first memories of cricket? Every player’s memories were something I could relate to – every Australian could. It’s hitting the ball tied up under the carport, Aaron Finch would hide his pads in his dad’s ute and hope to get a game, Justin Langer mowing the pitch in the backyard. You realise: they’re just like us.”

As Brown tells it the story on screen was dictated simply by what was discovered through the process of making the series itself. “Originally I thought there would be more analysing and picking apart the rebuild, but what became clear was through spending more time with the players, in that bubble, because they’re so close as they travel on different tours around the world, what’s going on in that environment isn’t necessarily what we think might be going on from afar. So we couldn’t tell the other story: we had to tell the players’ story. In one aspect it made it quite easy because our story was within that bubble, but it also made it hard because you had to view all the rushes, you had to view all the content, you couldn’t just skip over anything: we’ve gotta listen to every meeting, follow the games. Then the second beat we were fortunate with was that it was a great calendar of cricket with the Indian tour, the World Cup and then the Ashes. And then the stories that played out within that: it was one of the great Ashes series.”

We didn’t quite get the fairytale finish, but in a way it’s almost better because the fairytale is the scripted piece. This is real: it doesn’t always work out the way you thought it would, but you take away the fact that Australia won, because they won that respect back.

It was pure luck that it turned out that way, of course: the story told begins with the team at rock bottom, and then sees them start digging: there was no guarantee that by the end of this, there would be any redemption arc for a team that had gained a reputation for ugly arrogance and was now piling on a string of inept performances for good measure. Brown’s series could have proceeded in a much more depressing fashion.

“What was under the microscope,” he says, “was, there’s the success on field, but there’s also the success of how the team is viewed, and rebuilding and endearing themselves to the Australian public again. In the second episode they travel to Dubai, and they fight out a draw – Usman Khawaja bats for nine hours, and Tim Paine, the new captain, bats out the last over. That’s a heroic moment, and I think Australians got a lot out of it, because that’s all we want to see – you just want to see the fight. I remember watching that thinking, there’s something in this, even if we don’t win, because isn’t life about taking on the challenges? It’s not just about having to win to be successful, it’s about staying the course.”

It’s a prime example of cricket as a metaphor for life – only slightly spoilt by the fact that in the very next test Australia collapsed horribly and was thrashed, proving just how unpredictable a story can be when there’s no script. After all, even when they retained the Ashes, the team still lost the final test and failed to win the series outright. “It would’ve been amazing if we had won, but the challenge at the end of this piece was to go, we didn’t quite get the fairytale finish, but in a way it’s almost better because the fairytale is the scripted piece. This is real: it doesn’t always work out the way you thought it would, but you take away the fact that Australia won, because they won that respect back.”