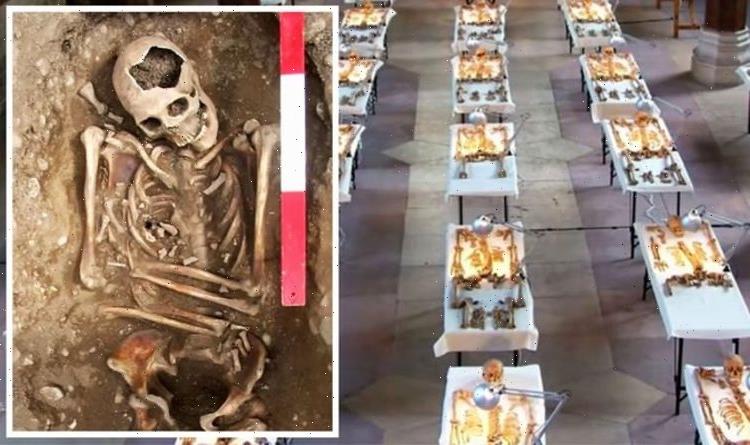 Christianity was ‘invented by the Romans’ says Joseph Atwill

The Roman Empire launched its conquest of Britain almost 2,000 years ago. It changed the face of the island’s history forever, with the Romans’ legacy left scattered around the country and in modern Britons’ blood. Bringing new foodstuffs, culture, music, religions and art to Britain, the Romans also brought great bloodshed, slaughtering the native Britons and capturing land as far north as Cawdor in Scotland.

In order to occupy swathes of the country, the Romans built intruding walls and forts, many found today overland, still more being found in archaeological excavations.

In York, a mass Roman burial grave was discovered, believed to contain the bodies of countless men.

Yet, as explored in the Smithsonian Channel’s documentary, ‘Secrets: Headless Gladiators of York’, the unusual condition of the skeletons threw researchers in their attempts to identify the bodies.

The remains suggested the men were all of fighting age, but were not soldiers, as their skulls were buried alongside them.

The experts’ theory suggested that the men were, in fact, battle-hardened gladiators.

As the documentary’s narrator noted: “If they’re correct, it will rewrite the history of the Romans in Britain.”

With the bodies exhumed, the team analysed the remains of the bodies for evidence that may have supported the theory.

The skeletons revealed that the men had experienced brutal combat, with cleanly sliced bones — inflicted by a sword or an axe.

JUST IN: End of the world: Date when Sun will die pinpointed

And, there was one final overwhelming piece of evidence: the burial ground may be unlike any other Roman cemetery in Britain, but it is almost identical to one 2,000 miles away in Turkey.

Ephesus was once a regional capital of ancient Rome, and its centrepiece was a theatre that could accommodate 25,000 people.

In 1993, just yards from the arena, archaeologists discovered a cemetery just like the one found in York more than 20 years later.

The bodies there showed men of fighting age in brutal conditions, having been executed.

In Ephesus, there was no doubt who the men were, as ancient tombstones show they were trained gladiators.

As the documentary noted: “The similarity between the two cemeteries is too great to be a coincidence.”

Kurt Hunter-Mann, an archaeologist at the York site, said: “What we’re looking at is a population that could be compared with Ephesus.

“I favour a gladiatorial explanation because that fits in with the population and the lifestyle that we’re dealing with.

“We’ve got something that would really only apply to a particular group of people who fought in the arena.”

Later analysis showed that the grave’s inhabitants had travelled further than expected.

Six of the individuals were similar to modern Welsh — presumably indigenous Britons – different to the populations living in York today.

However, one of the individuals had genetic affinities with people from North Africa and the Middle.

This provided vital evidence for long-distance migration during the Roman era.

the men were gladiators, others have suggested they may have been criminals.

However, the men all had conditions related to childhood deprivation and injuries consistent with battle trauma.

They were all also taller than average for Roman Britain.

All but one would have had brown eyes and black or brown hair but one had distinctive blue eyes and blond hair similar to the single Anglo-Saxon individual.