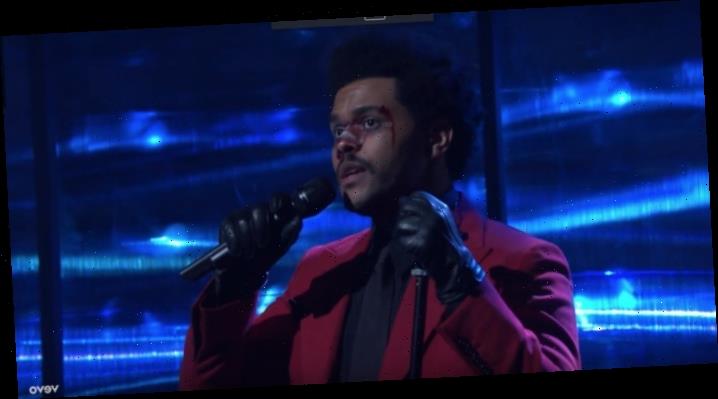 Weeknd fans tuning in to “Saturday Night Live” this weekend certainly got their money’s worth, as the artist not only performed his recent single “Blinding Lights,” but premiered a stunning new ballad called “Scared to Live” and showed off his comic chops in a musical skit and appeared briefly on “Weeknd Update” (geddit?).

His two musical performances found him in the red-jacket-and-busted-nose look he’s been rocking during recent videos and TV appearances, which — in an unusual move for a musical artist — is related to the evolving storyline of the videos from his forthcoming album, “After Hours,” which appears to depict his character in the midst of a very bad night in Las Vegas (involving gambling, substance abuse, a car chase and, apparently, a demonic possession — don’t try this at home, kids!). While his musical appearances on Jimmy Kimmel and Stephen Colbert were vaguely integrated into the storyline, these ones appeared to be more straight musical performances, albeit in full costume.

“Blinding Lights” was performed similarly to other appearances, but “Scared to Live” is a stellar new ballad that featured avant-electronic musician Oneohtrix Point Never’s Daniel Lopatin on keyboards and, at different times, interpolates a snippet of Elton John’s “Your Song” and recalls Foreigner’s “I Wanna Know What Love Is.” Check them both out below.

The Weeknd also appeared in a musical comedy sketch with SNL’s Kenan Thompson and Chris Redd, singing a hilarious R&B-flavored ballad about sleeping on the couch after a fight with the girlfriend.

Now in his third appearance on the show, it was inevitable that he’d give a short Weeknd Update.

“After Hours” arrives on March 20; The Weeknd is scheduled to launch a six-month tour of North America and Europe in Vancouver on June 11.

This week “Blinding Lights” became The Weeknd‘s 7th #1 on Billboard’s Hot R&B Songs chart, the most for any artist. Internationally “Blinding Lights” has been the #1 airplay song in both Germany and France for 7+ consecutive weeks, and it has recently hit #1 in Australia as well. Impressively, it has been the #1 song on the official charts in France and the UK for 3 consecutive weeks and counting.