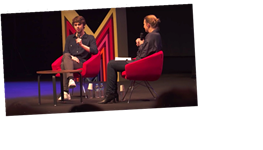 Coronavirus has claimed another victim in the TV industry events space after Series Mania was canceled on Wednesday.

The decision was made after the French government banned public gatherings with 1,000 people or more to stop the spread of the COVID-19 virus.

Series Mania was due to launch on March 20 and host world premieres of shows including Eva Green drama The Luminaries and Sky Atlantic’s Little Birds, while Breaking Bad star Giancarlo Esposito was jetting in as a gues to honor.

Series Mania president Rodolphe Belmer said: “Due to the recent restriction from the French government banning gatherings of more than 1,000 people, coupled with the travel restrictions for many of our international participants, we have made the difficult decision to cancel Series Mania.”

Founder and director general Laurence Herszberg added: “To our audiences, professionals, politicians, and industry leaders, we will be back stronger than ever in 2021 for a new edition that will be, from the bottom of our hearts, even more ambitious and radiant.”

The decision to scrap Series Mania follows MipTV and Canneseries being abandoned last week by organizer Reed Midem. The annual gathering in Cannes was attended by 10,000 people last year.