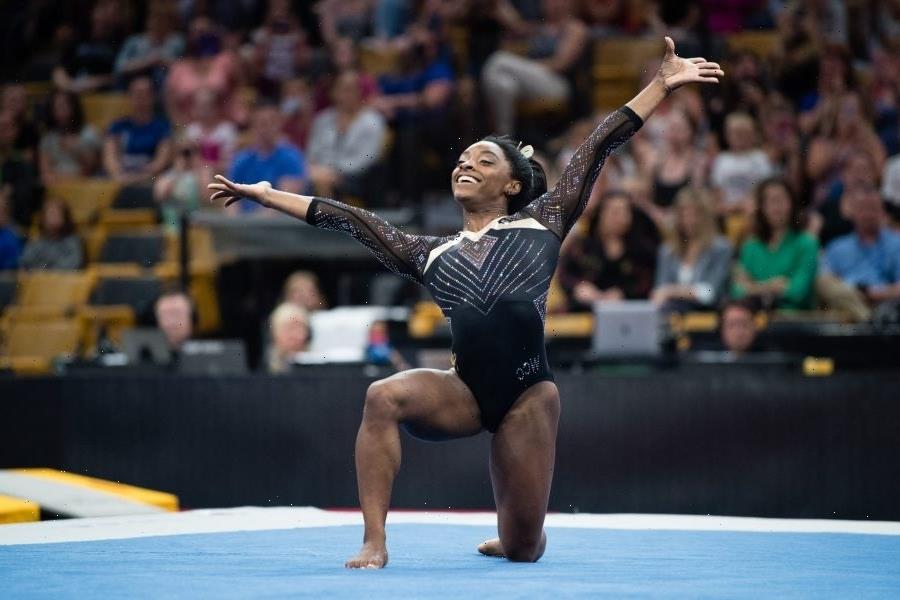 No matter how many times Simone Biles wows crowds, Twitter and celebrities (and some dignitaries, too), the immense response to the feats of strength and skill she displays in competition continues to surprise her. Most recently, she not only made headlines but also history as the first woman to land the complex Yurchenko double pike at the U.S. Classic last month. The vault move went viral on social media, stunning both athletes and the not-so-athletic alike, which the 24-year-old says she didn’t see coming.

“It’s definitely overwhelming because when I do that kind of stuff, I don’t expect it to go viral and then it does and then I have like LeBron [James] and Michelle Obama and Hillary Clinton tweeting me,” Biles tells ESSENCE. “It’s like ‘oh my gosh!’ I feel so blessed. It’s crazy. I never think of it like that because whenever I do it, it’s something I’ve been training all the time and I don’t expect to get that crowd from it. But it’s amazing to know that they’re supporting me.”

That’s simply how it is when you’re the greatest gymnast of all time and one of the greatest ever to play any sport. What seems monumental to everyone else is “another day at the office” to the seasoned, fearless professional.

We talked with Biles about that reality as she prepares to to execute even more show-stopping moves during the Athleta Presents Gold Over America Tour this fall, and of course, at the Olympics in July. She has a full plate of performances to put on, both for gold and for fun, which is a far cry from how life was for the star when the Olympics and everything else was shut down last year. Training was no longer the priority.

“I just shut the gym out,” she says, opting instead to “put it on the backburner.”

She adds, “My whole entire life I’ve kind of focused on gymnastics and there was so much uncertainty of when we could get back in the gym and how long the postponement would be and all that stuff. So for me to just kind of shut that out and shut that down for a little bit gave me a peace of mind so I wasn’t worrying all the time or so anxious.”

The time off quarantining gave her the chance to take some baths, walk her French bulldogs Lilo and Rambo, and bond with her boyfriend, Houston Texans safety Jonathan Owens. The two made it Instagram official last summer.

“He’s always been so supportive and I support him,” she adds. “We have such a great relationship and I love him.”

But no more quarantine coupling for now. She has championship meets before the summer Olympics, and as mentioned, she’ll be touring with an all-star team of gymnasts through 35 cities this fall for the Athleta Presents Gold Over America Tour. Tickets go on sale on June 11 on the event’s website. There will also be dancers, music performances and colorful video displays, all in a gymnastics show.

“It’s going to be something that nobody’s seen before. This tour is going to be a celebration of empowerment, togetherness and letting the gold inside each of us shine,” she says. “Hopefully it will showcase each athlete’s journey and inspire the next generation of athletes and gymnasts.”

As she continues to inspire sportsmen and women, present and future, she is well aware of her GOAT status. She’s worn a goat on the back of her leotard to make that clear. When asked what she hopes her legacy will be, Biles says she’s hopeful that the next gymnast will be inspired to know that anything is possible with hard work and determination because she proved it.

“To know that I pushed boundaries past what people thought were for a female gymnast and at this age as well, that I had fun doing it, that there was a lot of excitement,” she says, rattling off her list. “Knowing you can do it if you put your mind to it.”