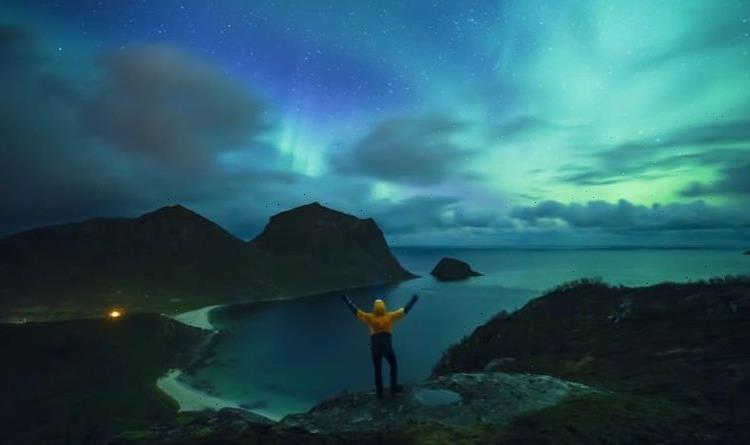 The Sun sometimes releases concentrated radiation from spots on its surface known as coronal mass ejections (CME’s) or solar flares that spit radiation into space. These flares can erupt from anywhere on the star’s 864,000-mile surface area and have hit Earth in the past. As this light enters the atmosphere, it creates a natural light display known by scientists as an aurora, and millions of people will see one for the first time today.

Can you see the Aurora Borealis today?

The Aurora Borealis occurs annually in and around the Arctic Circle, giving it its “Northern Lights” moniker.

The CME has pushed the lights out of their usual orbit and further south, giving people in the UK a chance to catch a glimpse.

The Monday evening display started around 11pm and bathed the northern regions in a gentle green glow.

Those who missed out need fear not, as forecasters believe the aurora will make another appearance tonight.

According to Lancaster University site Aurora Watch UK, the solar storm will tease out the lights from late this evening.

And they will come and go in waves until the early morning on Wednesday.

People hoping to catch the lights can start late this evening, from 7pm to 9pm.

Those willing to brave the early hours can wait a little longer until around midnight.

They will have seven hours from then, but the best opportunity presents itself around 4am.

Unfortunately, British viewers will also have to reckon with the local weather.

The organisation added that even with clear conditions, there is only a “slight” chance the aurora will light the skies above northern England.

The Sun’s latest ejection is comparatively weak, meaning it only has a slight effect on the planet.

Although this might come as disappointing for many people, it is for the best that the Sun won’t hit the world with its full might.

More significant CMEs have hit Earth before, and with disastrous effects.

The Sun’s ejected matter travels too far to scorch the surface, but the electromagnetic radiation it emits can make the 92 million mile trip without issue.

During the Carrington Event of 1859, a powerful ejection caused a “geomagnetic perturbation” which shorted out parts of the fledgling US telegraph network and ignited fires.

Another, more recent solar flare spat out a geomagnetic storm in March 1989 that caused power failures in Quebec, Canada.