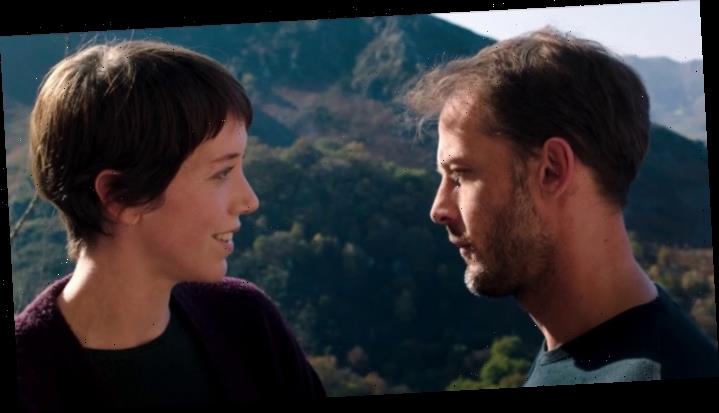 A tale of missed connections both earthly and ethereal, Pascal Bonitzer’s haunting “Spellbound” starts underground before it creeps upward to the atmosphere and beyond. Clad in a chic trench coat and styled with a noticeably old-fashioned, side-swept up-do, freelance writer Coline (Sara Giraudeau) is about to hear that ever-unpleasant delay announcement in the Paris metro. Once her train gets stalled, Coline exits, though almost shockingly unfazed, strolling through the streets until a chance encounter taps her on the shoulder. The man that’s appeared out of thin air is none other than Simon (Nicolas Duvauchelle), who evidently stepped out of the same shuttered subway line.

Through this brief foggy encounter and a few minutes of polite yet uncomfortable small talk, we grasp that there is some thorny history there, which Bonitzer’s intriguing yarn unpacks with otherworldly grace, but not always earthbound wisdom or authority. And that’s not necessarily a bad thing, as the prolific French writer-director — recently of “Right Here Right Now,” another twisty tale where past secrets come to loom large on the present — seems more concerned with aimlessly tiptoeing around death, grief and regret like a ghost, than offering definitive instructions to the living on how to deal with such deeply human troubles. In that regard, his “Spellbound” is suitably oblique and hypnotic, qualities that will appeal to the same theatrical audience that showed up for Olivier Assayas’ considerably more astute “Personal Shopper” and “The Clouds of Sils Maria.”

Even when it feels like Bonitzer is headed nowhere with this loose, contemporary adaptation of Henry James’ short story “The Way It Came,” his film (co-written by Agnès de Sacy) attractively carries traces of a formal costume drama, fashioned inside a melancholic mold. This mode is palpable moments after the train incident, when Coline come across her longtime friend and colleague Sylvain (Nicolas Maury), recounting her bizarre chance encounter. (The relationship of the two isn’t tidily explained in accordance with the guarded attitude of “Spellbound.”)

Using this conversation as a framing device, Bonitzer takes us three years back, to a launderette where Coline and her beautiful painter neighbor, the often rebelliously shoeless Azar (Iliana Lolic), bicker about life and desire. The backward leap and the events that take place within the flashback aren’t exactly David Lynch-level uncanny. But through Bruno Coulais’ stringy score — with Handel’s commanding Sarabande, the famous undercurrent of “Barry Lyndon,” thrown in to propel the mood in brooding depths— Bonitzer seizes a similar taste during this backstory segment.

Here, the regular book reviewer Coline sports a pixie haircut, hired to write the feature of the month for the women’s magazine she contributes to. Her profile subject is the famous (and famously isolated) painter Simon, a rather entitled artist living in the Pyrenees against breathtaking mountain views. He proves quick to make an inappropriate sexual pass at an annoyed and uninterested Coline, as well as to share a bizarre supernatural event that has marked his life. Turns out, the self-professed recluse had seen an apparition of his mother the moment she died elsewhere, a phenomenon that the free-spirited Azar had also experienced recently with her father. It would only make sense that the two meet and compare notes. Except, once she falls in love with Simon unexpectedly, an over-covetous Coline insecurely sabotages the rendez-vous she’s supposed to initiate.

Bonitzer can’t quite sell the rushed-through love affair between the leads. What feels like a mere physical infatuation more than an intense romance with Simon doesn’t quite justify Coline’s extreme jealousy. Still, “Spellbound” beguiles the viewer with its beautiful circular shape where (without spoiling the fun) mortality and sorrow frequently cross paths, with foreshadowed grief and the shock that follows it changing hands, from victim to victim. Giraudeau is especially striking in reflecting a sense of mortal sadness — a certain reluctance defines her posture and a tint of shy fragility lingers in her wide-set eyes, even when she has fulfilling sex with her lover in frank scenes, depicted as matter-of-factly as the rest of the film. Perhaps Bonitzer doesn’t have a profound point to make on the mysteries of afterlife. But his “Spellbound” — especially when Bonitzer braids his story’s loose ends together and tucks them into a tidy knot — seductively lures one into its tempting obscurity all the same.