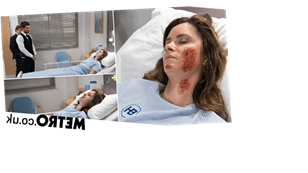 The tables have been turned on Scarlett (Christie Whelan Browne) in the most horrific way in Neighbours.

Scarlett has really done a number on Ned (Ben Hall), but he’s coming back fighting. He nearly lost his girlfriend, his freedom, even his life to this psycho woman, and he’s about to go all out to try and get justice.

Yashvi (Olivia Junkeer) came up with the genius plot of having a fake wedding to Ned to draw Scarlett out of hiding knowing she wouldn’t be able to resist. Of course she snapped up the bait and showed up at the fake ceremony ready to do maximum damage – armed with a jar of acid.

But they were ready for her, despite her plot to seriously maim either Ned or Yashvi in a bid to get her own revenge. If she can’t have Ned, no one can.

But her plot went awry when Levi (Richie Morris) intervened and an accident happened – Scarlett ended up taking the acid to her own face and receiving an agonising burn.

Scarlett is rushed to hospital but no amount of medical attention will change the fact she has scarred herself for life. And as she’s incapacitated, the police are able to finally get their hands on her!

But it’s not enough. They need more proof of her hideous crimes in order to take things further, and she for sure is not about to start talking. So Ned brings out the big guns.

While she refuses to cooperate with police questioning, Ned starts to goad her. He taunts her over her failure to pull off her crime and Scarlett can’t keep her mouth shut. She proudly reveals every horrifying detail of her plan to ruin Ned’s life, every sordid titbit of what she had in store, and finally confesses the big truth – she planned to frame him for murder.

Ned has finally got her right where he wants her – will she finally be out of his life for good?