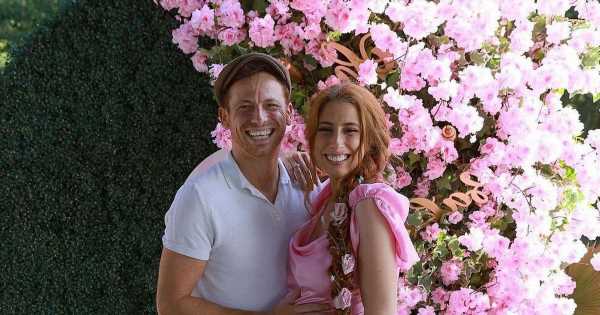 Stacey Solomon enjoyed a lavish baby shower recently ahead of the arrival of her first baby daughter with fiancé Joe Swash.

The Loose Women star's doting sister sent out the invitations to Stacey’s baby shower to all her nearest and dearest, but some thought that the get-together was going to be a surprise wedding ceremony instead.

Jemma Solomon, Stacey's older sister, who planned the lavish shower for her sister has admitted that she has received messages from loved ones who thought the baby shower might have been a cover-up for a secret wedding.

She told OK! Magazine that some of the guests still thought it might be a wedding, even upon arrival.

Jemma said, "So many people messaged me like: 'Is this a secret wedding?' And I was like: 'No! Does it not look like a baby shower?'"

Jem Jem, as Stacey likes to call her sister, organised the lavish baby shower in the back garden of the couple's new £1.2 million home in Essex, which they’ve lovingly named Pickle Cottage.

Stacey also nicknames her children her little 'pickles' which fans think is the sweetest thing ever.

Adorned with pink balloons, iridescent bubbles, flowers and large white letters that spelled out 'baby' – the venue, which was Stacey's back garden looked whimsical and magical.

Stacey took to social media to thank her sister for organising the magical get-together last Sunday (September 5), where she penned a sweet caption that read: : "Feeling so overwhelmed and emotional… What a beautiful day.

My sister arranged a baby shower for me and our little girl and it was so special. I love you Jem Jem to the moon and back. I can’t believe she’s nearly here. So grateful for everything. And thank you Sun for shinning today."

This comes as Stacey accidentally revealed the due date for her and Joe's baby girl when she took to Instagram on Thursday night.

As a regular panellist on Loose Women, and having had a long career in showbiz, Stacey would normally walk the red carpet at the annual National Television Awards.

However this year, Stacey skipped the glitzy ceremony and rested at home, watching the show from the comfort of her very own Pickle Cottage.