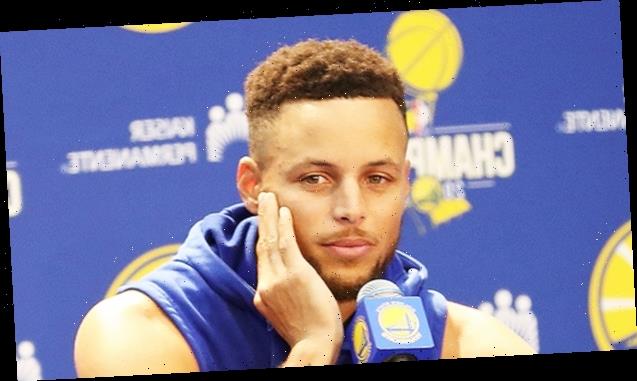 The Golden State Warriors have become the first NBA team to announce they’ll play in an empty arena to prevent the spread of the coronavirus. We have the team’s superstar Steph Curry’s reaction.

On March 11, the San Francisco Health Office announced an order banning gatherings with crowds of 1,000 people or more to stop the spread of the coronavirus. Since the NBA’s Golden State Warriors moved from their longtime home at Oakland’s Oracle arena to San Francisco’s Chase Center this season, that puts their games under the ban. The team has agreed to play without fans in the stands beginning with their Thurs. March 12 game against the Brooklyn Nets. The Dubs’ superstar Steph Curry, 31, says it will be “weird” at first to play in an empty arena without the valuable “energy” that their fans provide.

In a press conference following the announcement, Steph said that, “I understand the perspective and the decision in terms of trying to do our part to stop the spread and keep people safe first and foremost. We’ll deal with the repercussions of what that means going forward.” Steph spent four months out with a hand injury and just returned to active play on March 5, only to be sidelined by the flu two days later.

As for how it will affect the team the most, Steph explained, “Probably the lead-up to the first three minutes of the game cause everything about our routines rely upon that kind of game day energy. Pulling up to the area, seeing fans outside of Chase walking around in all their Warriors jerseys. The energy in the building, you can feel it. All the way from the locker room to the tunnel so stuff like that.”

He continued, “Once the game actually starts and you see another team out there, it’ll be weird, but I think we’ll get into it fairly easily. But just that lead up, there’s going to be a lot of big guys observing how different the situation and the atmosphere is. Trying to play an actual NBA game that counts with no fans in the seats.” Steph said that he “for sure” wants music played during the game “to make things as normal as possible.” He added, “I don’t know how they’re going to do it,” when it comes to a P.A. system with no one in the house but the players and coaches, but that “at the end of the day once we start playing, we probably won’t think about too much of that.”

The Warriors released a statement that read:

“Due to escalating concerns about the spread of COVID-19 and in consultation with the City and County of San Francisco, the Golden State Warriors announced today that tomorrow night’s game vs. the Brooklyn Nets at Chase Center will be played without fans. In addition, all events through March 21 will be cancelled or postponed at this time. Fans with tickets to Thursday and Saturday night’s games will receive a refund in the amount paid. We will continue to monitor this evolving situation closely to determine next steps for future games and events. We appreciate the understanding and patience of our fans, guests and partners during this unprecedented time.”