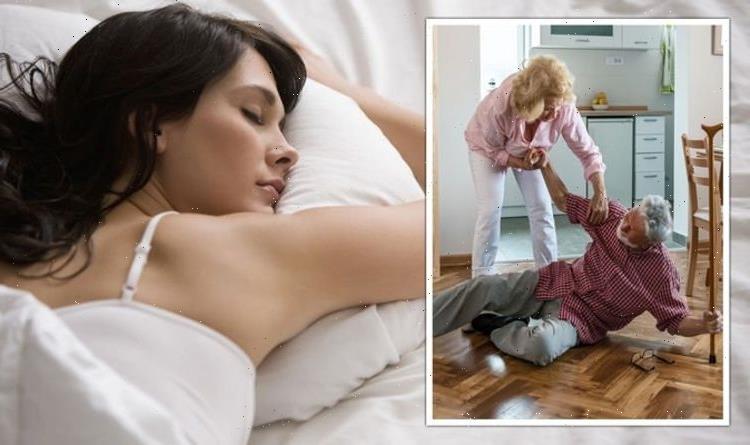 Statins: How the drug prevents heart attacks and strokes

Ischaemic stroke, one of the most prevalent types of stroke, occurs when a blood clot blocks the flow of blood and oxygen to the brain. The cerebrovascular disease, characterised by slurred speech, weakness and numbness, can leave sufferers with debilitating physical impairments that require special care. A new study investigating the association between stroke and sleep patterns has found shorter sleep duration and poor sleep efficiency could have a lot to answer for.

Study authors felt compelled to investigate the connection between sleep patterns and stroke incidence after noticing a lack of existing evidence based on polysomnography (PSG) records.

The device records brain waves, oxygen levels in the heart, pulse and breathing, as well as eye and leg movement during sleep.

Researchers investigated the relationship between objective sleep characteristics and incidence ischemic stroke, using the PSG records from more than 402 participants.

During the 10-year follow-up period of the study, 129 cases of ischaemic stroke were observed.

For their analysis, researchers identified three different sleep characteristics that may be adequate predictors for the incidence of ischemic stroke.

The first, sleep efficiency (SE), was defined as the ratio between the time a person spends asleep and the total time dedicated to sleep.

In most people, SE of 80 percent or more is considered healthy, with most young healthy adults displaying SE above 90 percent.

Wake after sleep onset – or WASO – is another important parameter of sleep, referring to the periods of wakefulness, starting from the moment a person falls asleep to when they become fully awake and do not attempt to go back to sleep. This statistic is usually measured in minutes.

The findings showed that longer WASO, poor SE and short sleep duration were associated with incidence of ischaemic stroke, even after accounting for all other risk factors.

What’s more, short sleep duration, of less than six hours, was associated with an increased risk of ischaemic stroke.

The researchers wrote: “Sleep hygiene education, which could help people decrease sleep disruptions, improve SE, and obtain suitable sleep duration, may be a helpful way to prevent the incidence of ischaemic stroke.”

The study follows a 2019 analysis based on self-reported sleep habits of nearly 32,000 adults.

The study demonstrated a link between day time napping and an increased risk of stroke.

It concluded that stroke risk was 25 percent higher among those who took midday naps for at least 90 minutes compared with those napping for less than 30 minutes.

Findings also showed that those who sleep more at night or during the day, may have other risk factors for stroke, such as higher incidence of depression, sedentary lifestyle and sleep apnea.

According to the NHS, other risk factors for ischaemic stroke:

The health body states: “Ischaemic strokes are the most common type of stroke. They happen when a blood clot blocks the flow of blood and oxygen to the brain.

“These blood clots typically form in areas where the arteries have been narrowed or blocked over time by fatty deposits known as plaques.

“Your arteries may naturally become narrower as you age, but there are some things that dangerously sleep up this process.”

Inadequate sleep has been associated with many other health ailments in recent years, including cardiovascular disease.