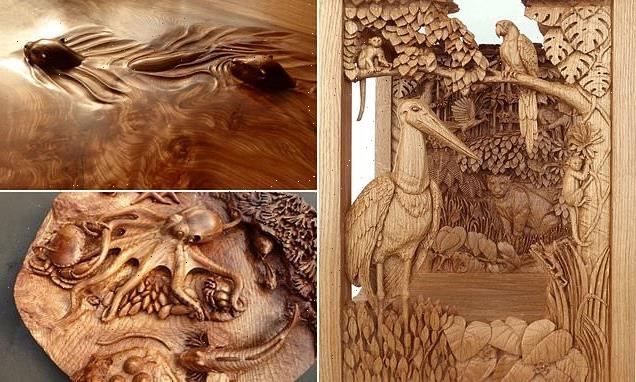 Wood you believe how good they are? Talented craftworkers show off remarkable carvings – including a table that looks like a river with otters – as they compete for prestigious award

The best of British woodworking talent is being judged for a prestigious event.

Three competitors are competing to win the Heritage Crafts and Axminster Tools’s Woodworker of the Year.

And – as these pictures show – competition is tough. The three finalists are a woodcarver, a furniture maker and a musical instrument maker. And the winner will be chosen on November 7. 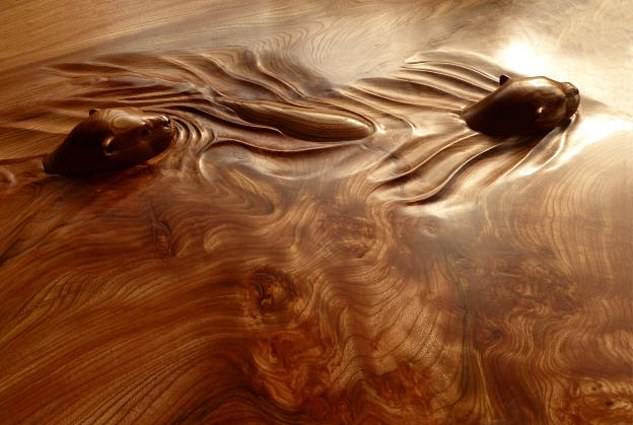 Otters seemingly swimming in an elm board. Most of workworker David Robinson’s work is of wildlife, landscapes, flowers and plants 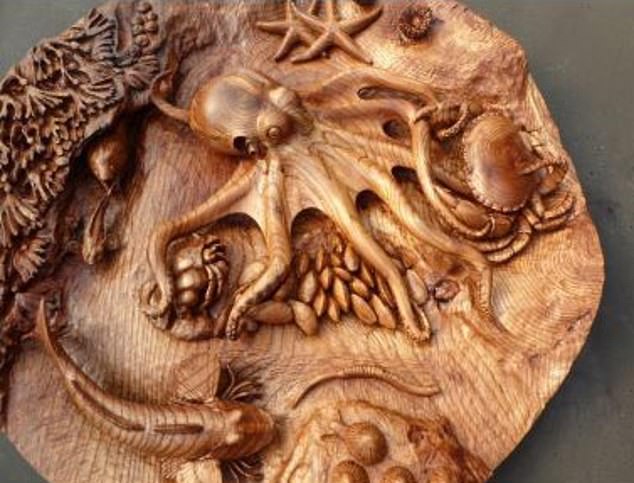 Rockpool: The ‘pool table’ was inspired by a rock pool in the Western Isles of Scotland – and is filled with sea creatures 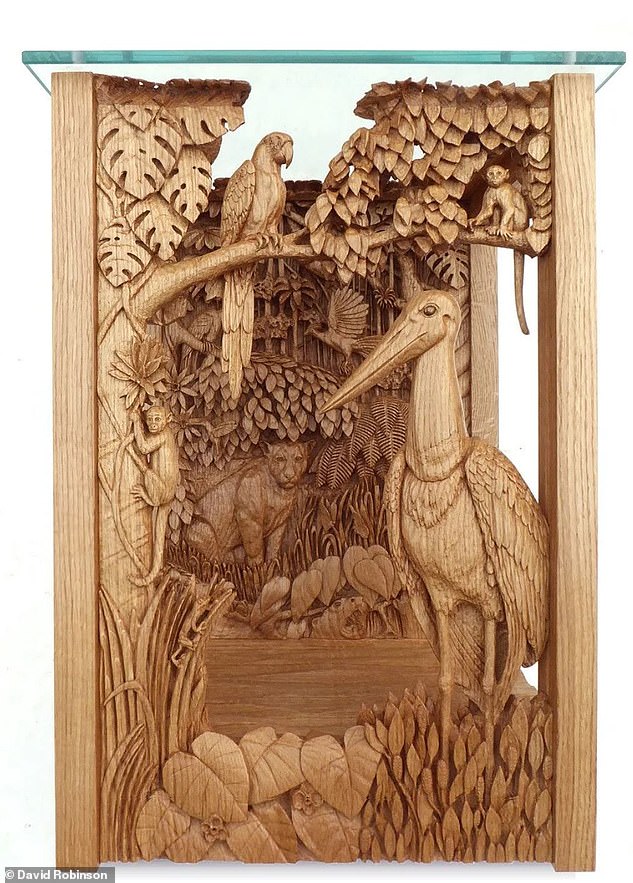 This table top celebrates the carver’s memorable trips to Peru and Brazil and records 21 animals. David said the ‘jaguar’s expression was a challenge to capture, the disdainful look on the giant river otter’s face is a delight, and the sloth … well clearly life is good, hang in there, be happy’ 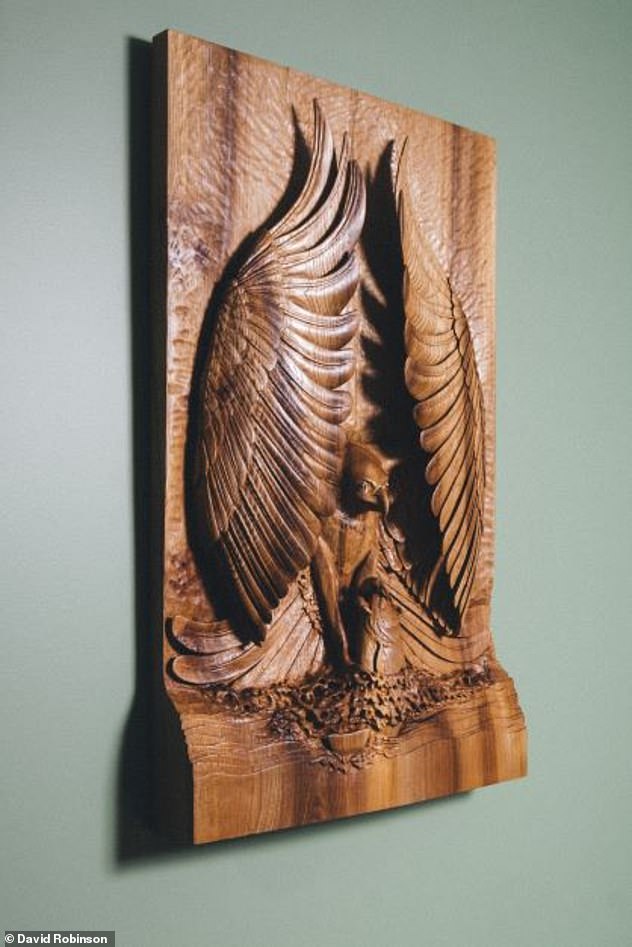 With inspiration taken from the Highland Loch Rannoch, this shows an osprey swooping down to catch a trout. It is made from ​Scottish elm, hand-rubbed oil and beeswax

Daniel Carpenter, director of Heritage Crafts, said: ‘We are thrilled by the quality on show amongst the finalists for this new award with Axminster Tools.

‘The UK is packed full of craft talent, despite it not always being easy for craftspeople to do what they do amidst the challenges and demands of modern life.

‘We need to shout louder about this important and enriching part of our culture.’

The three finalists are David Robinson from east Lothian in Scotland, Jonathan Hill from London and Robin Johnson from Hastings.

David Robinson is a self-taught woodcarver with 30 years’ experience.

He works largely with chisels he made himself from old penknives and bits of old Land Rover spring.

The carver most ofter uses Scottish hardwoods for his projects – using its grain features to express expression in the animals he depicts. 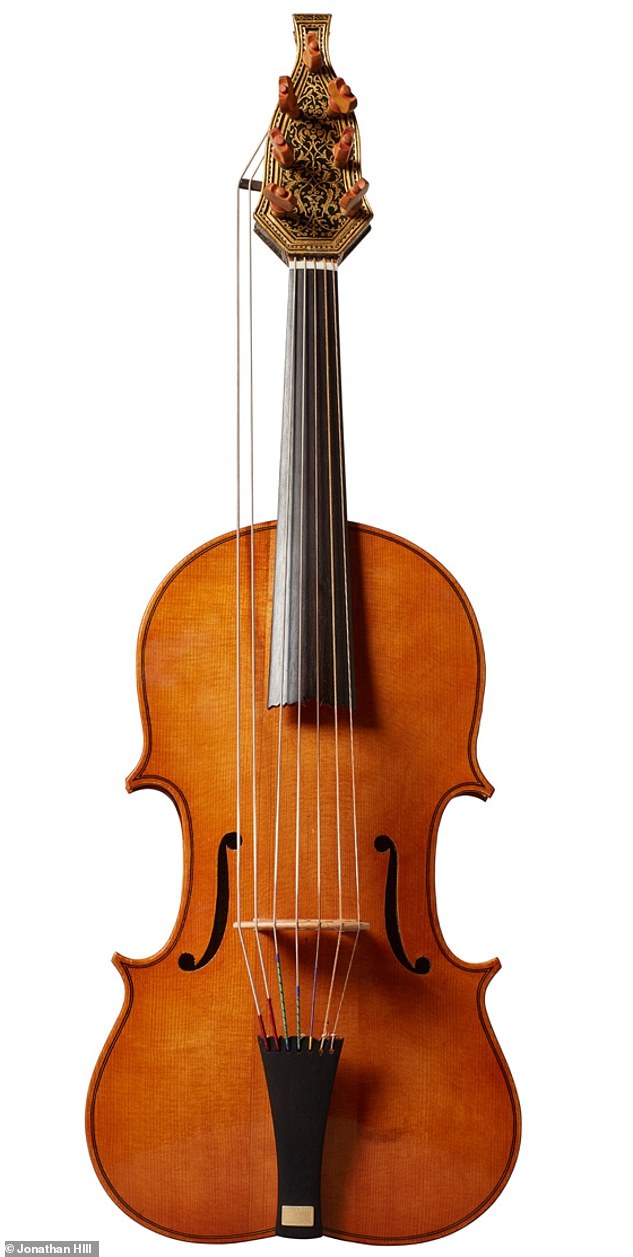 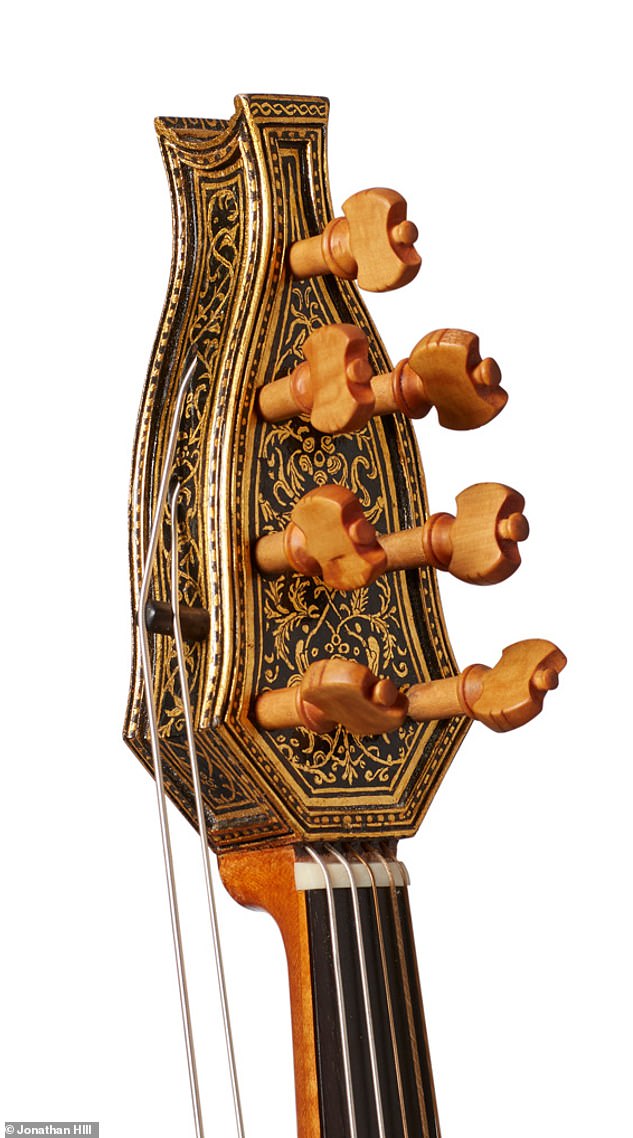 The same size as a viola, this Brescian-style instrument of northern Italy has five playing strings on the fingerboard and two bourdon strings which can be tuned as the player wishes 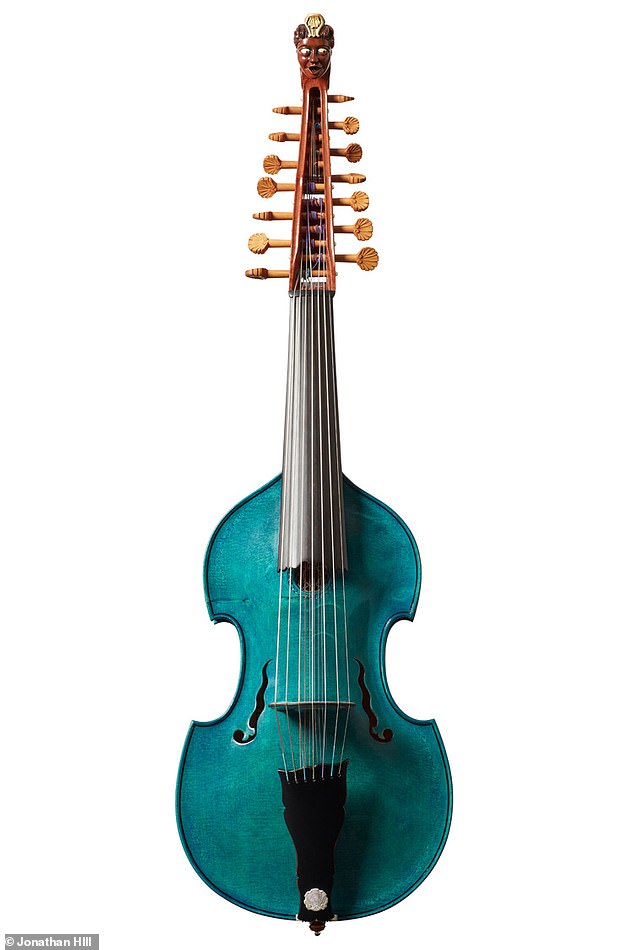 This stunning Die Lorelei 7/7 Viola D’Amore has a beautiful blue green colour with its decoration based on the legend of ‘die Lorelei’, a German poem by Heinrich Heine, in which an enchanting, seducing mermaid lures seamen to their death. Every part has been made using traditional techniques and materials to fit with the theme. The colour is made from indigo carmine stain and phthalocyanine oil pigment

His biography reads that he ‘worked for a master violin maker in Yorkshire, and studied instrument making in Turkey with a master traditional oud maker.’

And his website says he work reflects the beauty, craft skill and non-standardisation seen in historical instruments.

In the past 12 months he has designed and built the furniture for a Gold Medal winning main garden at the RHS Chelsea Flower Show, and been featured on TV shows Kings of the Wood and Salvage Hunters – The Restorers.

The work of all three will be judged for the competition run by Heritage Crafts.

The charity was set up to celebrate and safeguard traditional craft skills as a fundamental part of the UK’s living heritage. 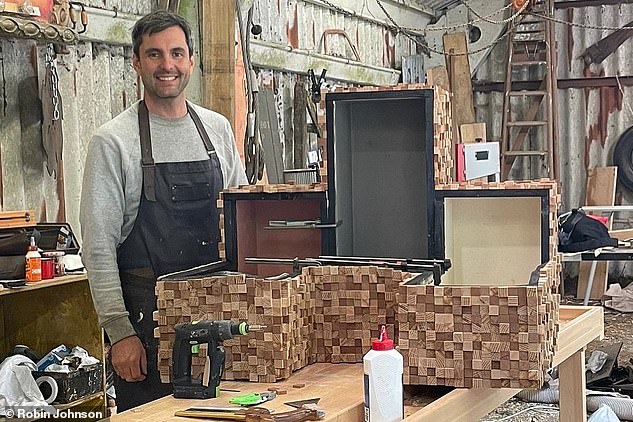 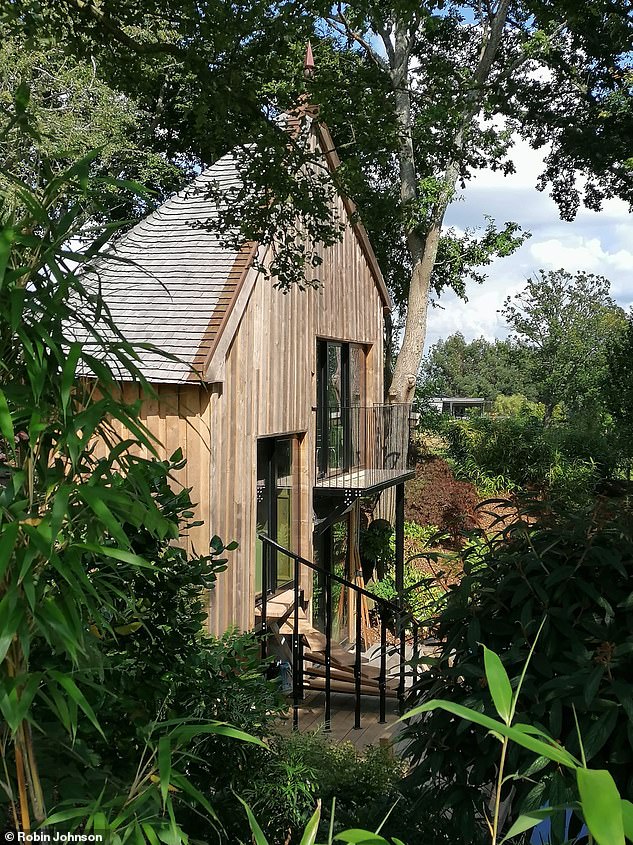 Set by a small lake, this tree house sits on a metal framed base and uses an old felled oak for its structure 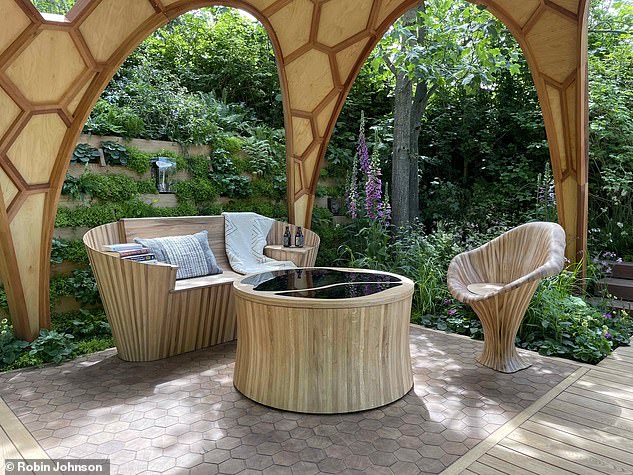 Robin was commissioned by garden and landscape designer Joe Perkins to design and make a seat for his Meta Garden at RHS Chelsea Flower Show, which explored the relationship between fungi and trees. This is the Chanterelle chair, inspired by the form of the mushroom that the chair shares its name with

Its President is King Charles, and it has The Repair Shop’s Jay Blades as a trustee.

Axminster Tools works together with makers and creators at all levels, from trade professionals through to craft enthusiasts.

A spokesman said: ‘This new award celebrates a heritage craftsperson who has made an outstanding contribution to the field of woodworking over the past year.

‘It recognises a contribution that is far beyond the ordinary, based on a proven dedication to a particular woodworking skill.’