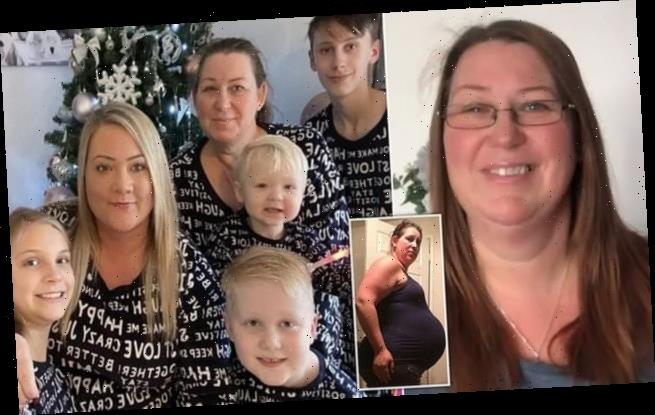 A mother-of-two who is currently expecting her seventh surrogate child has vowed this is the final pregnancy.

Ria Pawlow, 40, from Portsmouth, has helped three couples start a family and undergone a total of 13 rounds of IVF.

The care worker, who has two children from a previous relationship and shares two sons with her partner Stacey, whom she married in September 2017, is due on March 26 but admitted she expects the baby to come early because she has gestational diabetes.

It’s the second time she’s developed the condition – and she nearly died during her fifth surrogate birth when she retained her placenta, leaving her in intensive care and needing a blood transfusion. 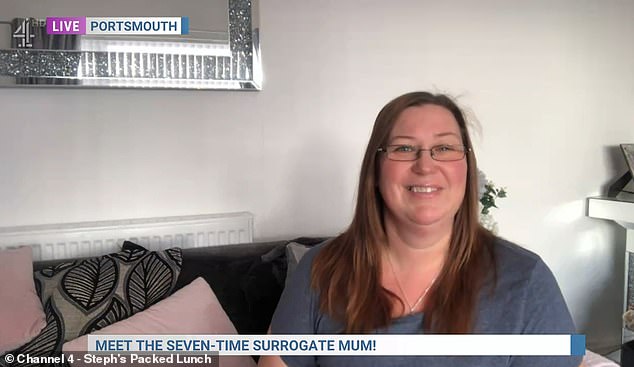 Ria Pawlow, 40, from Portsmouth, has helped three families have children and undergone a total of 13 rounds of IVF

But Ria insists she ‘loves’ being pregnant and is currently campaigning for a change in the law to give more rights to parents of surrogate babies.

Appearing on Steph’s Packed Lunch today, Ria explained: ‘I love being pregnant, I love feeling the baby move, giving birth is just amazing. I don’t have any pain relief, I’ve been very lucky I’ve had natural births up until now, they’ve all been pretty straightforward. I’ve had a few complications but I just love the whole process.

‘Obviously when you’re a mum, you know that feeling, when you give birth, you’ve got this newborn child, the rush of love that you get, there’s a lot of couples out there who can’t get that, they can’t have children.

‘So if I’m able to do that for them, knowing how it feels myself, and knowing how to create that for other people is just phenomenal.

‘I’ve created three families now, and every time I give birth with them in the room, see their first moments with that child, it is just overwhelming.’ 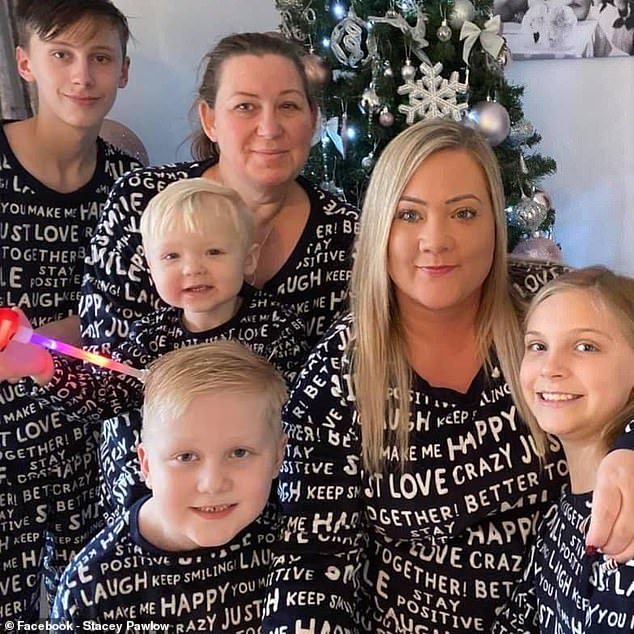 The care worker, who has two children from a previous relationship and shares two sons with her partner Stacey (pictured as a family), whom she married in September 2017, is due on March 26

Asked if she worries she might feel too attached to the baby to then hand it over, she added: ‘With IVF it’s all very medical, the embryo is put in when you’re in theatre, so it’s all very clinical.

‘For me that’s a really good mindset, and I know the baby isn’t biologically mine anyway so for myself it really does help with the mindset of detaching from bonding with the baby.’

Ria, who ­affectionately refers to the babies in her womb as ‘lodgers’, told how wife Stacey is very supportive of her surrogacy journey – and even helped deliver two of the babies.

‘I couldn’t really do it without her being with me,’ she said. ‘She helped deliver a couple of the babies because the twins arrived a bit quickly on the front room floor which Stacey unfortunately had to deliver, bless her. 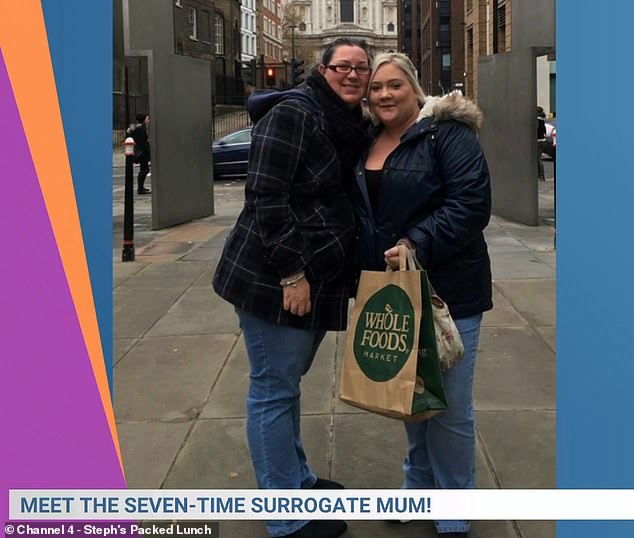 Ria, who ­affectionately refers to the babies in her womb as ‘lodgers’, told how wife Stacey is very supportive of her surrogacy journey – and even helped deliver two of the babies

‘The children are very accepting. Also with any child, they only accept what you tell them, so as long as you tell them in basic terms, the people you’re getting to know, they can’t have babies, they’ve got a broken tummy so I’m going to carry the baby for them, they’re accepting, they understand.’

When she decided to become a surrogate, Ria joined the agency COTS Surrogacy UK, through which she met all three of her couples.

She is keen for a change in the law, which currently states that the biological parents of a baby born through surrogacy cannot apply for a parental order until six weeks after they’re born.

Ria’s last surrogate baby was delivered in December 2019, but court delays made worse by the Covid-19 pandemic meant she continued to have official parental responsibility until September last year.

‘That is really harsh for the parents because they’ve got no rights until that parental order has been granted,’ Ria explained on the Channel 4 show today. 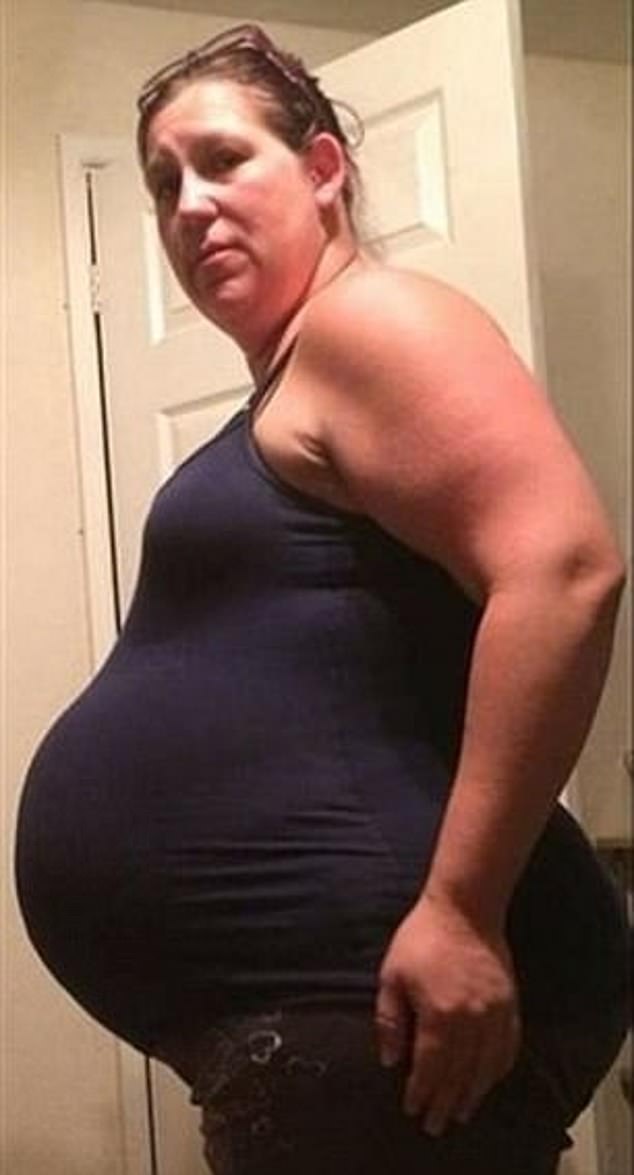 Ria, pictured during a previous pregnancy, is keen for a change in the law, which currently states that the biological parents of a baby born through surrogacy cannot apply for a parental order until six weeks after they’re born

‘So things like obtaining a passport if they wanted to do that, they can’t until they’ve got the new birth certificate. And things like medical procedures – one of my surrogate babies had tongue-tie, and there I was having to email the hospitals in London for them to go ahead and consent to it.

‘I was happy to give my permission for that to happen, it’s not my baby, it shouldn’t be my permission, but technically, legally on paper it’s still my baby. These parents need more rights for their child.’

WHAT ARE THE UK SURROGACY LAWS?

In the UK surrogates are the legal mother of any child they carry, unless they sign a parental order transferring their rights to the intended parents when they give birth.

The birth mother always has the right to keep her child, even if they are not genetically related.

It’s illegal to pay a surrogate in the UK, except for medical expenses.

Ria had son Matthew and daughter Charlie before meeting Stacey in 2010. They used a sperm donor and Stacey later gave birth to son Toby, followed by another son in 2018.

Ria’s first surrogacy embryo was implanted in October 2011, and in June 2012, Carl was born and weighed in at 9lbs 3oz.

She said she ‘sobbed her eyes out’ when the new parents held their baby boy.

She gave birth to twins Max and Ruby prematurely in 2015, and started fertility treatment for her fifth surrogate child Daisy, who was born in July 2017, while on honeymoon.

Ria said: ‘While she was a healthy 8lbs 8oz, I retained my placenta, leaving me in intensive care and needing a blood transfusion.

‘The surgeon said I was lucky not to lose my womb and need a full hysterectomy.’

Despite there being no payment for being a surrogate, and her near-death experience, Ria continued to help families have children – and has a star tattooed on her back for each surrogate baby.

She is being paid £15,000 in expenses for this pregnancy.

Proposals for a new law have been drawn up by the Law Commission but final recommendations won’t be delivered to Parliament until 2022.

Ranking the celebrity reality shows where competing can really hurt