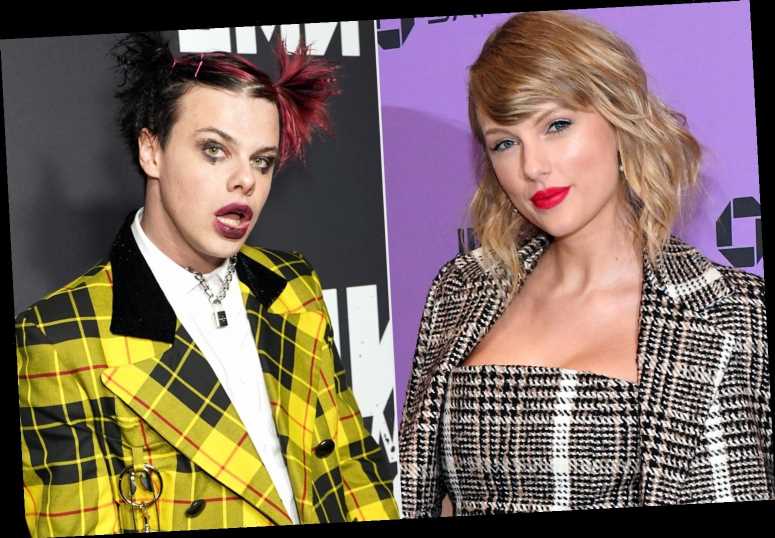 Taylor Swift can't get enough of this cover!

On Tuesday, U.K. singer-songwriter Yungblud debuted a cover of Swift's ″Cardigan" for BBC Radio 1's Live Lounge series, mixing the song with Avril Lavigne's 2002 single ″I'm with You″ for a haunting acoustic mash-up.

″CARDIGAN x IM WITH YOU … covered my favourite girls @taylorswift13 n @AvrilLavigne for the @BBCR1 live lounge! go watch full vid on youtube and run up the coms with '🖤🖤🖤s' show em you’re bhc! #yungbludscardigan," Yungblud wrote on Twitter, sharing a clip from the performance.

The emotional cover soon caught the attention of Swift, 30, herself, who applauded the rendition on Twitter.

″WELL this took my breath away and I’m honored to hear Cardigan intertwined with the wonderful @AvrilLavigne’s masterpiece ‘I’m with you’. Bravo and thanks @yungblud!! 👏👏 🙏🙏," wrote Swift.

Responding to the Grammy winner's endorsement, Yungblud wrote, ″thankyou for creating such a beautiful song."

"Cardigan" is the first single from Swift's most recent album (her eighth) folklore, which debuted in July. Revealing the ″surprise″ project hours before its debut, Swift noted that a lot didn't go according to plan this year — and this album wasn't even an inkling in her wildest dreams.

″Most of the things I had planned this summer didn’t end up happening, but there is something I hadn’t planned on that DID happen. And that thing is my eighth studio album, folklore," she wrote. ″Surprise 🤗″

The singer/songwriter shared that she ″poured all of my whims, dreams, fears, and musings" into her latest crop of music, which she created while self-isolating.

″Before this year I probably would’ve overthought when to release this music at the ‘perfect’ time, but the times we’re living in keep reminding me that nothing is guaranteed,″ she wrote. ″My gut is telling me that if you make something you love, you should just put it out into the world. That’s the side of uncertainty I can get on board with.″

After dropping the album, Swift posted on Twitter her inspiration behind the fairytale-like ″Cardigan″ music video and record.

″In isolation my imagination has run wild and this album is the result. I’ve told these stories to the best of my ability with all the love, wonder, and whimsy they deserve. Now it’s up to you to pass them down," the star wrote.

Why Elle Lorraine Is Scary Good in 'Bad Hair'