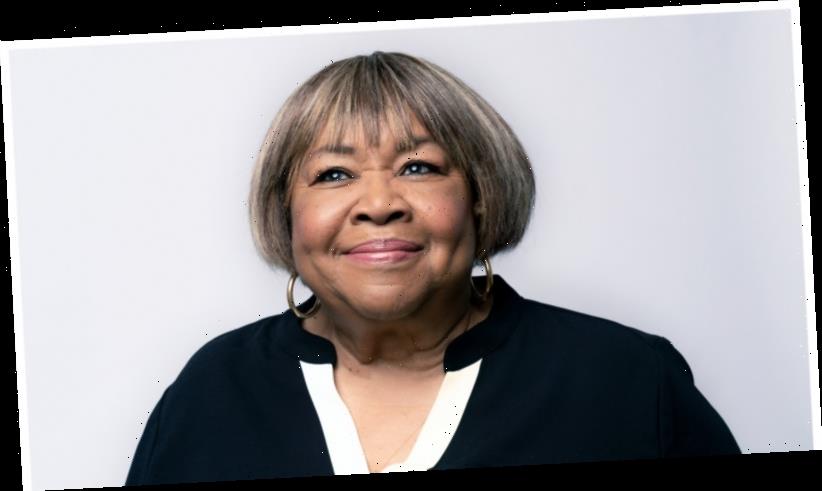 The picture is old, but it still kills. Gordon Parks’ Outside Looking In shows a handful of Sunday-dressed children gazing through a cyclone fence. Across a cool green lawn lies a playground, forbidden to their kind in the time and place concerned: Mobile, Alabama, 1956. 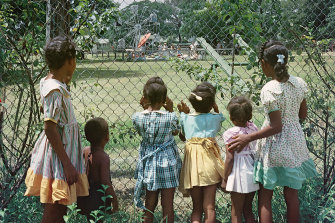 Gordon Parks’ Outside Looking In (detail) on the cover of Mavis Staples’ latest album.

‘‘I met him one time, at the Apollo Theatre in New York,’’ Mavis Staples says. ‘‘That was the only time I had a chance to shake his hand. He was a great man,’’ she says of the Kansas photographer and filmmaker renowned for illuminating the African-American experience from Life magazine to Shaft.

Last year, Staples’ record label sent her a few potential cover shots for her new album, We Get By. ‘‘I didn’t have to go any further after I saw that one,’’ she says. ‘‘It reminded me of my sisters and I standing there. Summer schoolgirls with their dresses on … my mother used to put little dresses on us like that.

‘‘We couldn’t go in the playground here in Chicago when we were little girls. We wanted to get on a swing and have fun like that but we weren’t allowed to. We didn’t have any grass. We played in a vacant lot with glass and rocks. So I said, 'this is my album cover, right here'.’’

In a world where ‘‘outsider’’ kids are still detained behind wire fences, she doesn’t say why this picture is doubly disturbing in 2020. But ‘‘it is, I tell you,’’ she agrees in a low voice. ‘‘We have a lot of work to do. A lot more work, today.’’ 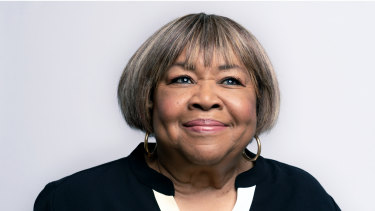 ”Oh, we’ve had some fun.” Mavis Staples looks back on a life in music. Credit:Myriam Santos

The work has come thick and fast from the youngest child of Pops and Oceola Staples these past 15 years. Under the auspicious wings of Stax Records, Curtis Mayfield, Prince or Ry Cooder, she’d managed just a handful of solo albums since 1968. We Get By is her seventh since she started banging on doors to restart her stalled career in the new century.

The flood of new material is especially remarkable given a genre that’s historic by nature. Pops drew the Staple Singers’ blend of gospel and blues from the same Mississippi cotton farms where Charley Patton, Son House, Robert Johnson and Howlin’ Wolf played their parts in the epic soundtrack from slavery to civil rights.

In the 1960s, Pops heard common goals and opportunities in the folk boom, the soul movement and the political evangelism of Martin Luther King. With Mavis pleading and hollering out front of older siblings Cleotha, Pervis and Yvonne, the Staple Singers were virtually the house band on the march to freedom. 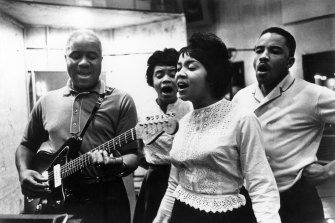 Mavis Staples (front) performing with her father and siblings circa 1970. Credit:Getty Images

Like Gordon Parks’ photos, this is a montage we know well. How many times we need to retell the story depends on how long we need to hear it.

‘‘The bigotry, the hatred, it’s still alive,’’ is how Staples sees it, ‘‘and so the struggle is still alive and Mavis is still here and I’m gonna continue to sing as long as I’m needed.’’

Her new album was written and produced by Ben Harper: a passing of the baton from Wilco’s Jeff Tweedy, who has overseen most of her renaissance to date. With its emphasis on loss and demands for change and a brooding centrepiece called Heavy On My Mind, it’s an act of protest from the same cloth as Staples Singers classics Freedom Highway and I’ll Take You There. But if her titles can be read as biannual state-of-the-union summaries, We Get By is a sober comedown from Have A Little Faith and Livin’ On A High Note.

‘‘It has gone backwards,’’ she concedes, ‘‘because it had gotten so much better. I hate to say, when I watch the news sometimes, I feel like I’m back in the ‘60s. I’m seeing stuff that I saw back then and it’s worse.

‘‘We had some young men marching with torches here! And what made it so strange, they looked like college students. They didn’t look like thugs, like it used to be.

"Those people, back in the day, they looked mean and evil but these people that were marching with these torches, they looked like everyday young men. 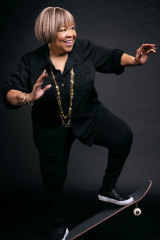 ”I did good.” Mavis Staples decided to try skateboarding when she turned 80. Credit: Myriam Santos

‘‘It’s terrible. I mean, I hate to call him by name, but this man in the White House, he has made a rebirth of bigotry and hatred; dividing the people. I think about Dr King, I think about my father, and I just have to pray a lot. I pray that we can get it better.’’

We Get By was made in the sad shadow of Yvonne’s passing in 2018. The two sisters had been inseparable. But Mavis’ daily meditations on her late father’s life and legacy are as apt to bring laughter as tears.

She gets herself in stitches over stories about Curtis Mayfield, Sly Stone and George Clinton, to name just three of the countless crossroads of secular and sacred the Staple Singers survived.

‘‘My father, he was the best,’’ she sighs. ‘‘Now, what helps me most is the Staple Singers’ old songs. I put our records on that we sang back in the day. That’s what helps me most of all. I love to hear my father sing Respect Yourself. He was so cool. He knew how to sing. Just smooth.

‘‘One time, Sly Stone asked Pops, ‘Pops, gimme the bag. You’re too cool, I know you got it’. My brother told him, ‘Pops, he’s talking about marijuana’. Pops said, ‘You get away from me, you better!’ He said, ‘I don’t need that! I’m a church man!’ Oh, we’ve had some fun. You’re making me bring back some memories that are making me really joyful right now.’’

From Halls of Fame and Kennedy Centre honours to the Gordon Parks Foundation Award in 2017, it’s hard to think of many milestones Mavis Staples is yet to pass as she marches into her ninth decade in front of her own road-drilled gospel-blues band (‘‘They’re my family now,’’ she says quietly). But she’s still finding new ways to get there.

‘‘I had been telling Ben Harper, ‘Ben, I see you on your skateboard and it really looks like fun’. I said, ‘I’d like to do that for my 80th birthday’. So we had a photo session and Ben brought his skateboard and I got on that skateboard. I think maybe I went about three or four feet,’’ she says with another rattle of laughter. ‘‘So I did good! I did good.’’

Mavis Staples plays the Melbourne Zoo Twilights on March 7 and Womadelaide on March 9.