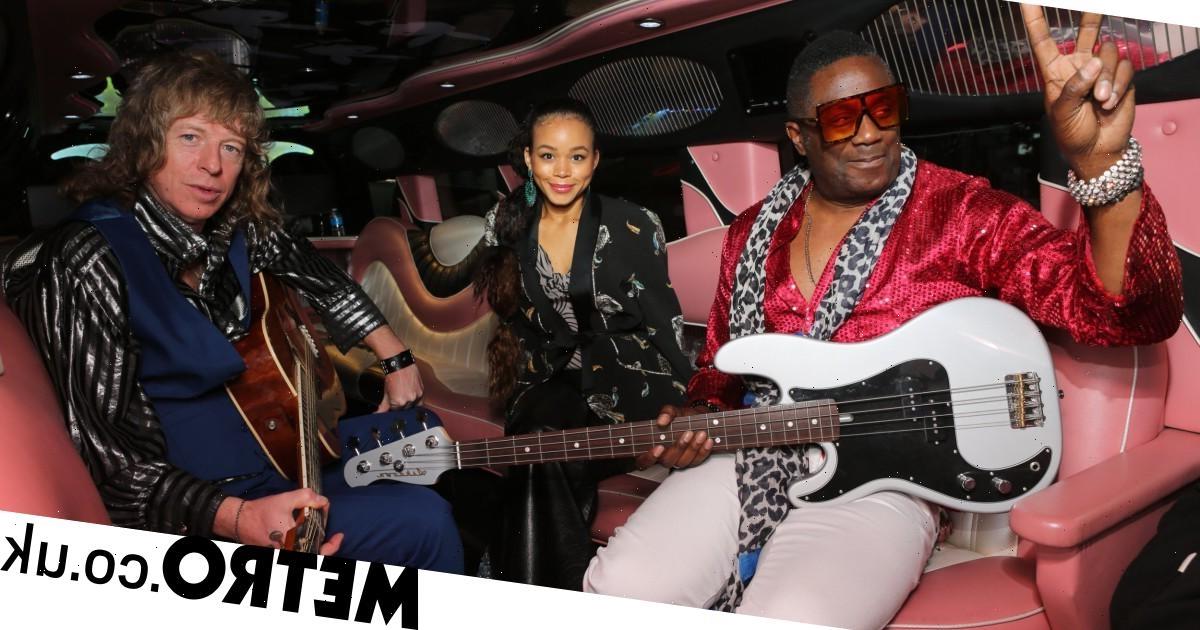 It’s not every day a pink Hummer pulls up to your house and picks you up. It’s a sunny October morning and when I knock on the frosted window two men in flamboyant shirts step out. Andrew Levy, in sequined shirt, white jeans and massive sunnies: ‘I had to get changed into these at the leisure centre. I cooked scrambled eggs and beans for breakfast, couldn’t wear this!’ And Simon Bartholomew, sporting silk and feathered haircut and a swagger and a smile. I can tell he’s got the gift of the gab.

Levy and Bartholomew have been friends since their West London teen days decades ago, when they met at school and bonded as they taught themselves guitar.

You might know them better as The Brand New Heavies – and for a string of hits in the early 90s featuring N’Dea Davenport on vocals – Dream On Dreamer, Never Stop, Midnight At The Oasis.

Now, they are joined by new vocalist Angela Ricci, previously a backing singer for Kelis, Rita Ora and Gary Barlow, a Brand New Heavies fan in the 90s and now touring with the band.

They beckon me inside this temple to 90s kitsch, brandishing guitars and dressed with their trademark flamboyance.

Levy kindly offers me a Prosecco to get the party started but I grab a water. I’ve never done a chat with a band in a pink Hummer – not since I interviewed my first musician way back in 1998 in the grubby back room of a Leeds pub on an assignment for the student paper. 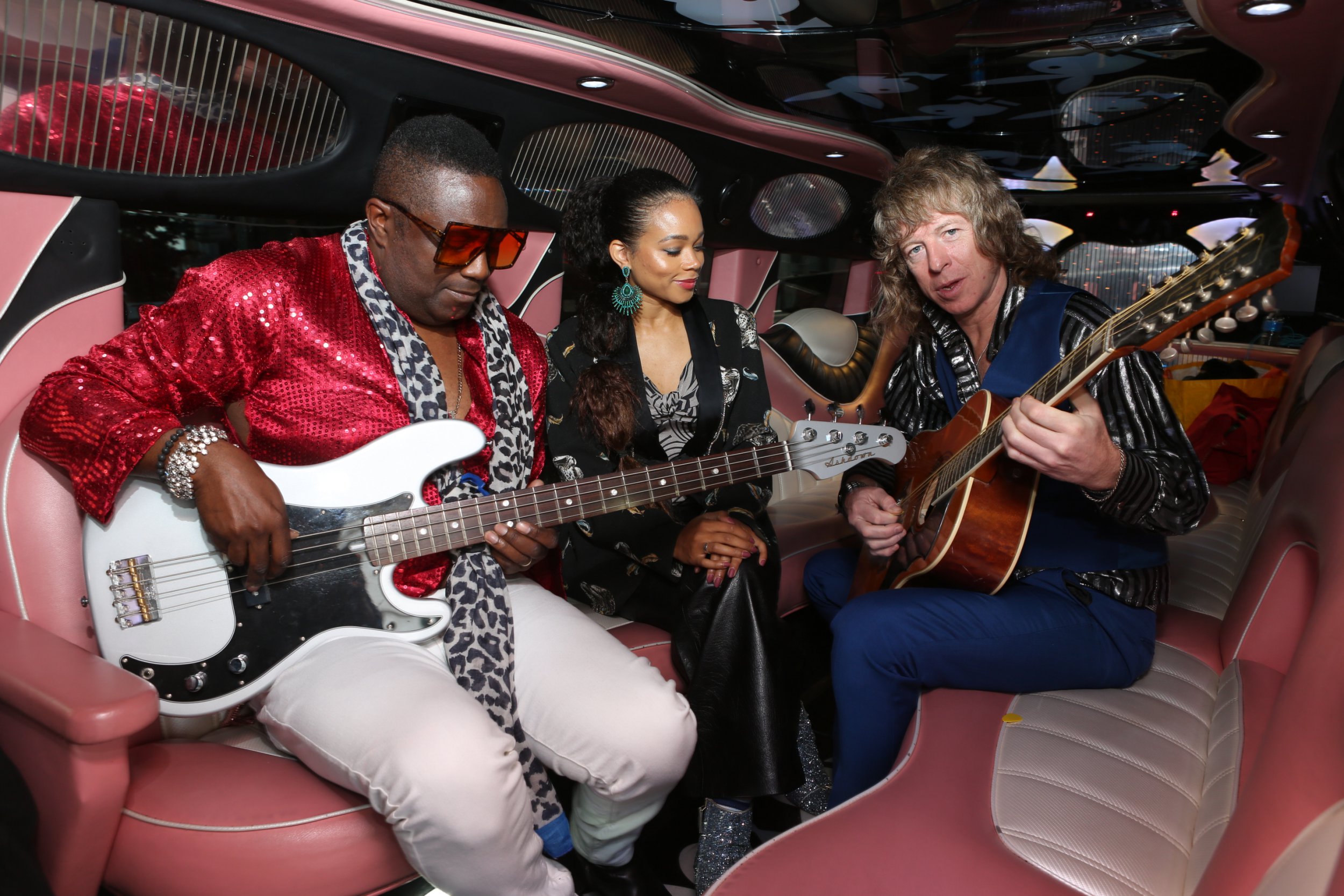 At that time, my Saturday job was in the King’s Lynn branch of HMV, where I flogged too many CDs by Robbie Williams and The Corrs (Gary Barlow’s, incidentally, were stacked up unsold in the back, ready for the sale or return van that came each week).

Another album that was flying off the shelves back then was The Brand New Heavies’ Shelter, featuring one of the band’s most beloved tracks, You Are The Universe.

I recite this story and Angela Ricci’s eyes light up. ‘My first job was at HMV too! The huge one at the Trocadero in Piccadilly Circus.’

We talk about how our mutual love of music kept us entertained – them dreaming of making it, me just spinning records in clubs and writing about it.

If Levy and Bartholomew are the wise owls of the band, Ricci is the new peahen on the block – glitzy, glamorous and with smooth vocals. Born in Kinshasa and raised in Italy, she is now a London girl. She puts out her own solo songs and has sung back up for Kelis – ‘She’s great, we were touring with her kid.’

The band have previously joked that vocalists are to them what drummers are to Spinal Tap – Ricci seems here for the duration though and has the vigour the band need to bring life to songs which still resonate with many almost 30 years after many of the biggest were written.

All of the trio have kids now – Levy was up at the crack of dawn taking care of his, Bartholomew is in a mums and dads band at his kids’ school, Ricci has a 17-month-old she just took to a festival for his first taste of mum on stage.

Generations change but the band is still going strong, playing a mix of festivals and indoor gigs and planning to embark on a postponed world tour to Australia, South America and Japan next year.

Back in the 90s the band were hanging out with everyone. Says Levy: ‘We partied a bit with my old friend Stella McCartney and the supermodels back then, we used to get involved with Stella’s fashion shows.’ In fact, Levy walked as a model in McCartney’s infamous graduate fashion show from Central St Martin’s.

‘We’ve danced with Bjork in a Met Bar lock-in and turned down an impromptu invitation to a party in LA from Grace Jones because we were busy, which we’re still kicking ourselves about!.’

Ice Cube is another example. Levy says: ‘He came to our studio in New York in 1991 while we were making our album the Heavy Rhyme Experience. He said he was really into our music, we couldn’t believe it.’

They also tell me about hanging out with Prince and playing Mark Ronson’s 40th birthday. They were close to Jamiroquai – Bartholomew plays guitar on Emergency On Planet Earth – and the sounds of both was a kind of audio shorthand for the mid 90s.

Bartholomew tells me another story about time well spent with a young Steve Coogan and Simon Pegg one hazy evening at Teatro, but we will skip over the details of that one.

In latter years too there’s been a lot happening in their world and a lot of interest in their music. You wonder why they’re not getting mobbed as we step out on to the typically eccentric Dalston streets outside my flat, where they have picked me up. The guys in the shop downstairs peer out of the door and we attract a few glances as we pose on the limo.

I want to say to these people: you know Pharrell is a fan? And Q-Tip too? And these guys did some of the music to Happy Feet?

Well, maybe a new generation is about to discover The Brand New Heavies because they’re making music again as part of a multi-album deal they’ve just signed.

Levy says: ‘We’ve just signed one of the biggest record deals we’ve ever had – a seven-figure recording deal to release five new albums over the next few years.

‘Our first new single will come out in spring next year – but we’ve been busy touring. We’d better hurry up and start writing again.’

What can we expect when they do? ‘To mix it up a bit when we start writing again, we want to throw in a bit of 90s dance and try out some classic disco with distorted guitars… and a bit of rock!’ says Bartholomew.

Ricci says: ‘It would be great to see some collaborations with young producers and bands of today, that perhaps have been inspired by the Brand New Heavies and are doing well in their own rights. Even release some remixes by chart topping DJs.

‘I’m excited about what the future holds for us as a band, excited about being involved in the new music and bringing together old fans and new converts!’ she adds.

At that, Ricci jumps down from the pink Hummer’s bonnet and the guys put their guitars back in.

It’s certainly been a memorable experience and not one I ever expected when I was stood behind the counter at HMV selling all those Brand New Heavies albums 23 years ago.

I promise I’ll go to one of their next shows and you should too.

The Brand New Heavies play Indigo at the O2 on 11 November and a dozen more UK dates, with the tour sponsored by Truth Naturals. You can book tickets at tbnh.co.uk

10 THINGS YOU DIDN’T KNOW ABOUT THE BRAND NEW HEAVIES