Victoria’s Peninsula Link will be home to a new $300,000 sculpture, with Australian artist Natasha Johns-Messenger unveiled as the latest recipient of the Southern Way McClelland Sculpture Commission.

Since 2013 the commission has seen large-scale works installed along two sites on the Peninsula Link highway near Mornington. Specific details of her project, titled Compass 23, are under tight wraps but Johns-Messenger told The Age how she always draws inspiration from where her artworks will be installed. 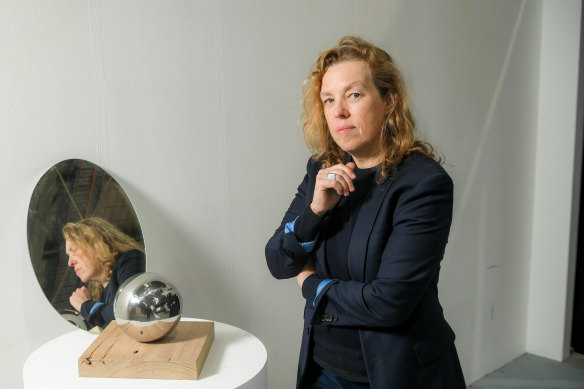 “I was thinking about how once upon a time we had navigational forces like the stars,” said the artist. “Now we’ve got our phones … I think people rely so much on the virtual that we don’t really know which way north is half the time. ”

As can be gauged from its title, Compass 23 is interested in direction and the work will reflect its location by the Cranbourne Road exit ramp with curved forms echoing the freeway itself.

“I’m not supposed to reveal exactly what it is, but to give you a taster it’s a subtle line drawing intervention in space, using the sky as a voluminous form,” she said.

Johns-Messenger’s works have been exhibited around the world, including at Netherlands’ Escher in Het Paleis, the Australian Centre for Contemporary Art and La Biennale di Venezia. This is her largest single structure to date, and its location brought about its own challenges. “You have to think about the audience hurling through space, essentially, instead of in a gallery where they can contemplate and look in a very different way.” 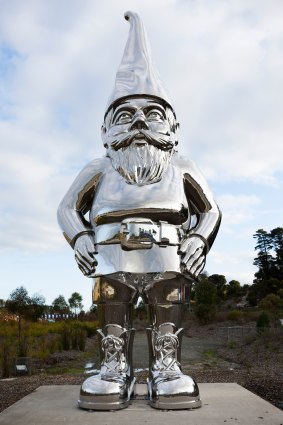 Safety is also the number one consideration. “That’s why it took a long time to develop something that was very simple, but that still had the same weight of ideas,” she explains. “Normally I use mirrors in my work to talk about and extend space – with this you can’t easily use mirror surfaces and reflective surfaces on the freeway because it’s too confusing for viewers.” For Johns-Messenger, however, limitations are an opportunity. “They send you back to the drawing board as an artist, and you have to think harder and create through the problem.”

Compass 23 will be replacing Lover Flower by John Meade with Emily Karanikolopolous. After four years along the freeway, the sculptures are relocated to McClelland Sculpture Park and Gallery. It means that audiences will have the opportunity to engage with the works in an entirely different way – something that Johns-Messenger kept in mind during the development of her design. “Sections of it face north, south, east, west, and in the sculpture park [the work] will also face the direction of north from the same angle.” 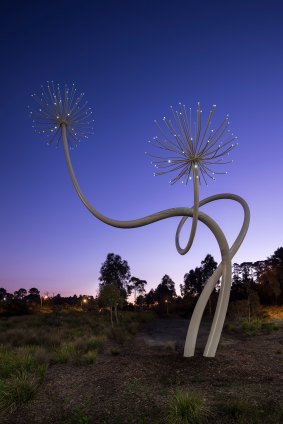 What the sculpture looks like won’t be revealed until spring 2023. “We keep it a surprise,” says McClelland director Lisa Byrne. “We don’t show any drawings, we don’t show any photographs, so the first time anyone would eyeball it would be during the install period.”

This will be the seventh work in the series run in partnership between McClelland Sculpture Park and Southern Way, with the program wrapping up in 2037. For each of the works “there’s an incredible response from local community and from the 74,000 people on average, that drive past one of those sculptures every day,” says Byrne.

Public art tends to evoke strong feelings and reactions. For this series “at first people love them when they go in, or they might not like them – and then over the course of the four years there’s this whole evolution of thinking about the sculpture takes place as people drive past them,” Byrne reflects. “It isn’t necessarily, I don’t think, about liking it – it’s about engaging with it on some level, and letting that level evolve over time.”

Johns-Messenger feels that public art serves as a reminder of the creativity that is inherent in all of us. For Compass 23, “I’m hoping that there’ll be a bit of a double take for the driver by about the structure and what shape it actually is,” she says.

“There’s a beautiful elevation about Natasha’s work. It’s a sculpture that will continue to give through time,” says Byrne. “It’s a really elegant, thoughtful, poetic work.”

A cultural guide to going out and loving your city. Sign up to our Culture Fix newsletter here.