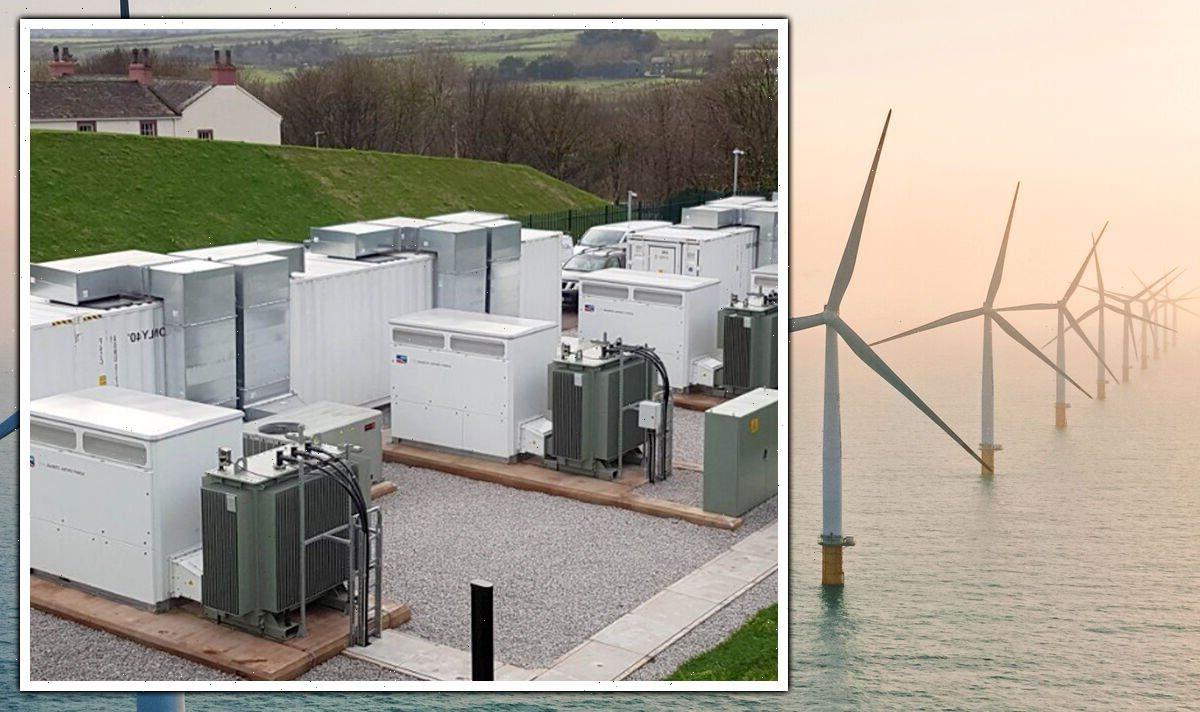 Amid an energy crisis that has seen bills soar to astronomical levels due to the UK’s staggering dependence on volatile gas markets, Britain has been scrambling to ramp up its energy security to break free from Russian Vladimir Putin’s grip on the market in the hope of driving down bills. And as winter looms, there are even fears that Britain may not be able to shore up enough imports to keep the lights on this winter as National Grid warns there could be a period of 3-hour rolling blackouts during the coldest months of the year.

But there are several energy storage sites around the UK that could already help the UK avoid such a scenario, and with many more planned, these plants could prove vital in driving down bills and harnessing the true potential of Britain’s renewable energy infrastructure.

Energy storage sites work by storing the excess energy produced by renewables, which sends power to the plants when weather conditions generate high amounts of power that is not necessarily required when demand is low.

Instead of the excess power being wasted, storage sites can send power back into the grid at times when demand is high. This has the potential to let millions of homes access cheap power, and can provide a stable supply of energy that could prove vital in avoiding shortages. Express.co.uk has listed several planned and operating sites that area dotted around the UK.

TagEnergy’s battery storage facility is already in operation at the Hawkers Hill site, and some of the energy it stored up has already been exported to the grid. Elon Musk’s Tesla was involved in the construction of the £16m facility, a process which started in September 2021.

The site uses Tesla’s Megapack lithium-ion batteries, together with the firm’s Artificial Intelligence software, which is able to identify when demand is low or high.

Franck Woitiez, Chief Executive Officer, TagEnergy said: “Flexible technology systems like Hawkers Hill Energy Park’s battery storage will play an increasingly important role in boosting the UK’s ability to capture, store and release renewable energy for a more reliable and regular supply. We are proud to be delivering clean power to support the national grid at this critical time and will continue to leverage our battery storage expertise and flexible supply to optimise the market, help stabilise the grid and increase renewables’ share of it.”

TagEnergy’s site is not the only UK storage site up-and-running that is using Tesla’s technology. Harmony Energy’s battery storage site near Hull came online on Monday, four days ahead of schedule. It can store enough electricity to power 300,000 homes for two hours.  Like the storage facility at Hawkers Hill, the plant in Pillswood, Cottingham, also uses Tesla’s AI software to match energy supply to demand. This had been due to be switched on in two stages in December 2022 and March 2023.

The Pillswood site can store up to 196 MWh energy in a single cycle and is built next to the National Grid’s Creyke Beck substation, which will be connected to Dogger Bank. This will be the world’s largest offshore wind farm, which is set to launch in the North Sea later this decade.

Peter Kavanagh, director of Harmony Energy, said: “Battery energy storage systems are essential to unlocking the full potential of renewable energy in the UK and we hope this particular one highlights Yorkshire as a leader in green energy solutions.

Low Carbon’s two projects, one in Cleator in Cumbria and the other in Glassenbury in Kent, have a total capacity of 50 megawatts. Running on lithium-ion batteries, the sites “ensure that energy is always available where it is needed”.

The Kent site runs on 3,640 lithium-ion battery modules which provide “almost instantaneous responses to energy supply and demand” and is capable of powering more than 3,250 homes for a day.  The Cumbria site is much smaller in scale, running on just 900 lithium-ion batteries and a 10-megawatt capacity.

Although they are not yet operating, Highview Power has plans to significantly scale up the UK’s energy storage capacity in a bid to bring a major boost to Britain’s energy security. While it eventually hopes that 20 plants will be built around the country, it has currently pinpointed two major sites at Carrington, Machester, and Humber, Yorkshire.

It is hoped that the first plant, a £250million Manchester station, will come online as early as 2024. It will have a 30megawatts capacity, able to store 300megawatt hours of electricity, enough to supply 600,000 homes with clean power for an hour.

The next plants will be even larger in scale, with four a five planned for Humberside with a 200megawatt/2.5gigwatt hour capacity. The CRYOBattery site would be able to store excess energy generated by the Dogger Bank, Hornsea and Sofia wind farms.

Speaking exclusively to Express.co.uk, HighView Power CEO Rupert Pearce said: “The size of those is a lot bigger. They will be able to each serve around 6 million homes. We are talking about very substantial storage to the UK. 6 million homes is about the size of Sizewell C.”

He added:”We are building offshore wind at an incredible pace. We have gone from 11 gigawatts to 50 gigawatts in seven years and it is transformational for the UK economy. That is taking us from 40 percent of offshore wind generation today to 90 percent to the end of the decade.

“It is in the North Sea, it is off the east and west coast of Scotland and a bit off Wales. Wherever that wind gets landed, we are going to be building our power stations to capture the excess wind.”

“We will be there in Humberside, in Norfolk, Kent and the east coast of Scotland take wind power, keep if refrigerated and ready – stored as liquid air – ready to move it on when the demand is there. We are dotted all around the coastlines.”

Centrica Business Solutions has reportedly started working on the plant, at Brigg in Lincolnshire that could provide energy storage for 43 onshore wind farms across the country. The decommissioned gas station, now set to become a battery storage facility, is set to remain in operation for 25 years after it comes online late next year.

It is claimed that the site will be able to maximise the potential of every megawatt of green electricity to provide enough energy to provide a full day’s consumption to 11,000 homes, or around 15 percent of homes in North Lincolnshire.

Greg McKenna, Managing Director of Centrica Business Solutions, said: “Investing in low carbon energy assets that boost the UK’s ability to store more renewable energy is key to getting to net zero. Lincolnshire has 242MW of onshore wind power capacity but when supply outstrips demand some of those green electrons will go to waste if not stored.”

Kona Energy has struck a deal with Gore Street Energy Storage Fund (GSF) for a 200MW project in North West England.  Once constructed, this site will be one of the biggest battery storage facilities in Europe, storing electricity generated a variety of sources, including renewable power.

Speaking to Express.co.uk, Andy Willis, the founder of Kona Energy commented: “This project could power up to 200,000 homes for 2 hours when constructed, which we hope to achieve as soon as is feasibly possible.

“Battery storage systems are an irreplaceable piece of the renewable puzzle. Without them, a vast amount of clean energy will continue to be wasted at great cost to the billpayer.

“The more of these projects online, the stronger our position will be in the turbulent global energy market – there is no time to waste.”