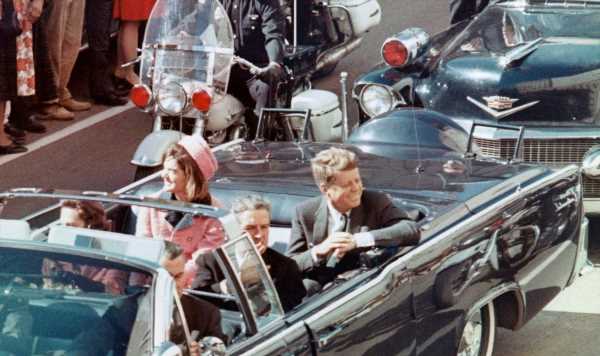 It has been 59 years since the shocking murder of John F. Kennedy, the fourth American President to be assassinated in the last century. Sitting alongside the 35th President of the United States on the fateful day of November 22, 1963, was his wife of 10 years, Jacqueline Kennedy Onassis, known as “Jackie”. The former First Lady wore the now famous suit the entire day as a message to her husband’s killer. Express.co.uk takes a look at that fateful day and what has happened to the garment.

As the President’s open-top motorcade made its way through Dealey Plaza in Dallas, Texas, the former US marine Lee Harvey Oswald fired three shots from the Texas School Book Depository, where he was working at the time.

Oswald’s bullets tore through the President’s body who then slumped lifelessly towards his wife, Jackie who was sitting next to him in the limousine.

She then proceeded to wrap her arms around him and – as the motorcade headed for the hospital – asked “Jack, Jack, can you hear me? I love you”, according to a 1963 interview with the New York Daily News.

Just half an hour later, JFK was pronounced dead at Parkland Memorial Hospital.

It had been a harrowing year for the Kennedys as the couple had lost their premature son, Patrick, just months before. Unusually, Jackie had chosen to accompany JFK on what turned out to be the fateful trip.

Jackie’s pink suit was splattered with her husband’s blood which she famously refused to take off the entire day in what became a symbolic message.

The former First Lady deliberately chose to continue wearing the pink CoCo Chanel skirt suit because she said she had wanted the assassin to see what they had done to the President, known fondly as “Jack”.

In her diary, the former First Lady from 1963 to 1969, Lady Bird Johnson, wrote: “I looked at her. Mrs. Kennedy’s dress was stained with blood. One leg was almost entirely covered with it and her right glove was caked, it was caked with blood – her husband’s blood. Somehow that was one of the most poignant sights – that immaculate woman, exquisitely dressed, and caked in blood.”

She continued: “I asked her if I couldn’t get someone in to help her change and she said, ‘Oh, no. Perhaps later I’ll ask [secretary] Mary Gallagher but not right now.’ And then with almost an element of fierceness – if a person that gentle, that dignified, can be said to have such a quality – she said, ‘I want them to see what they have done to Jack’.”

Jackie then had to be pictured on Air Force One at Lyndon B Johnson’s inauguration. She later revealed that she regretted not being covered in more blood as she had wiped her face prior to being photographed.

The former President Kennedy, who died when he was just 46, had reportedly asked her to wear the outfit and matching pillbox hat as it was one of his favourite of her garments with his last words to her being that she looked “smashing”.

Jackie’s suit, stockings, shoes, and handbag are now preserved in the National Archives but the location of her hat and gloves are unknown.

The suit and her accessories are not on display with this remaining the case for another 100 years.

The Kennedys’ daughter, Caroline, officially donated the pieces to the Archive in 2003. However, she asked for the suit to remain privately stored until at least 2103 which she specified in the deed.

Caroline did this in order to prevent any “undignified or sensational use of the materials (such as a public display) or any other use which would tend in any way to dishonor the memory of the late President or cause unnecessary grief or suffering to members of his family”.

Five years after the President’s death, Jackie remarried, tying the knot with a shipping tycoon, Aristotle Onassis. Upon her death in 1994, Jackie was buried next to the former President in Arlington, Virginia.