He also believes in psychics. 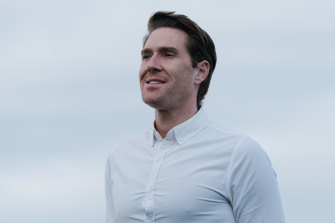 Stephen Blackie is an atheist and evolutionist. But he also believes in psychics, and he seeks advice from them on professional, relationship and life decisions.Credit:James Brickwood

Of the dozen he’s seen, some repeatedly, he seeks advice on professional, relationship and life decisions.

For the 38-year-old from Manly, it’s therapy-lite.

“I go to pause, reflect and take some signs from the universe,” he says. “It’s far more than them just reading my body language.”

“Therapy’s a 10-week commitment; this is a twice yearly check-in tapping into my interest in spirituality, energies, frequencies and karma,” he says. “Your gut instinct can sense something’s right or wrong before you know it is.”

There was a time those into astrology and psychics embraced the element of woo-woo; they owned their eccentricity as thinking outside the square.

Today’s believers aren’t necessarily new-agers or flat-earthers. They trust in science yet they’re professing a belief in the opposite: unproven pseudoscience.

Dr Micah Goldwater, a senior lecturer at the University of Sydney’s School of Psychology, describes this as “explanatory coexistence”: the integration of scientific and supernatural beliefs.

“It’s rare to just have one or the other,” he says. “It’s piecemeal – we don’t necessarily have overarching coherence in how all our differing beliefs work.”

With psychic mediums such as the late Sylvia Browne telling the mother of missing American teenager Amanda Berry she was dead when she was alive the whole time, there’s a clear potential for danger in taking them seriously. Berry’s mother died shortly after of a broken heart.

“If someone’s engaging with psychics for fun, there’s no problem. But, if people are basing decisions with real consequences, then following the advice is as dangerous as those consequences,” Goldwater says.

Is it fair to diminish this as codswallop?

“Even if technically it is bullshit, that doesn’t mean it’s helpful to dismiss it,” Goldwater says. “It’s a natural function of the human mind to think in superstitious ways. The vast majority of people have some kind of non-scientific belief. It helps people make sense of the world and their place in it.”

“It’s a natural function of the human mind to think in superstitious ways. The vast majority of people have some kind of non-scientific belief. It helps people make sense of the world and their place in it.”

Blackie is currently seeing Rebecca, a psychic in Manly with an 18-month waiting list.

“Friends are desperate to see her after what she told me,” he says.

Blackie says that in addition to connecting him with his late grandmother, she boosted his confidence in his new job: he’s a sales director and manages a team of 10.

“Rebecca gave me the reassurance I was in the right role at the right place” he says. “So, I hit the ground running. It contributed hugely to my first successful year in the position.”

Part of it is affirmation, he concedes. But he draws a line when given the example of Glenn Rosewall, chairman of Australian stockbroking firm BBY.

After Rosewall hired a psychic for four years to advise on where to invest, who to hire and even who to fire, the firm went bust.

“Insane!” Blackie says. “You cannot run a company based on psychic predictions, just like I don’t live my life by it. I use them merely as signposts.”

Timothy Ward is a tutor at the University of Newcastle studying spiritualism. Those rejecting pseudoscience and conspiracy in other parts of their life, yet indulging psychics, is, he says, rooted in spiritualism echoing scientific language and taking on an air of plausibility.

“In the late 19th century, people became disenchanted with religion due to Darwin’s findings and lost faith in rigid doctrines and seemingly irrational devils and angels,” he says. “This became an alternative pathway to a spiritual fix. Visiting a psychic requires far less of an individual than converting to Catholicism.”

With psychics offering Zoom readings throughout lockdown, Goldwater believes, at a time of great uncertainty, many people are seeking to restore control to overcome powerlessness. “Sense-making goes into overdrive,” he says. “They’re reasserting order.”

Caroline Power, 40, is a dietitian from Sydney’s Sutherland Shire. She’s also double vaccinated. She describes herself as “pro-science and pro-choice”.

“She validates stuff I’m already feeling,” Power says. She claims Obeid has accurately predicted she’d get pregnant even when wearing the contraception implant, and advised her on buying property.

It’s channelled through Obeid’s dad Don who, Obeid says, agreed he’d “work with” his daughter from the beyond, four weeks before he died in 2010.

“Don was a real estate whizz so, via Melanie, he selected the house we bought,” Power says.

Sometimes Obeid connects Power to her best friend, who took his life: “It helped me discover his reasons.”

In new book The Psychic Tests, former astrologer Felicity Carter says this is a spiritual realm in which LGBTQI people like Blackie and women like Power – often shut out from the hierarchies of major religions – can feel empowered.

Power’s atheist husband challenges her on her psychic beliefs, but she likens it to religious faith.

“I ask why they pray to God in church, hoping for insights and answers. It’s exactly the same,” Power, who is Jewish, says.

The Psychic Tests: An Adventure In The World Of Sceptics And Believers by Gary Nunn (Pantera Press, $32.99) is out now.