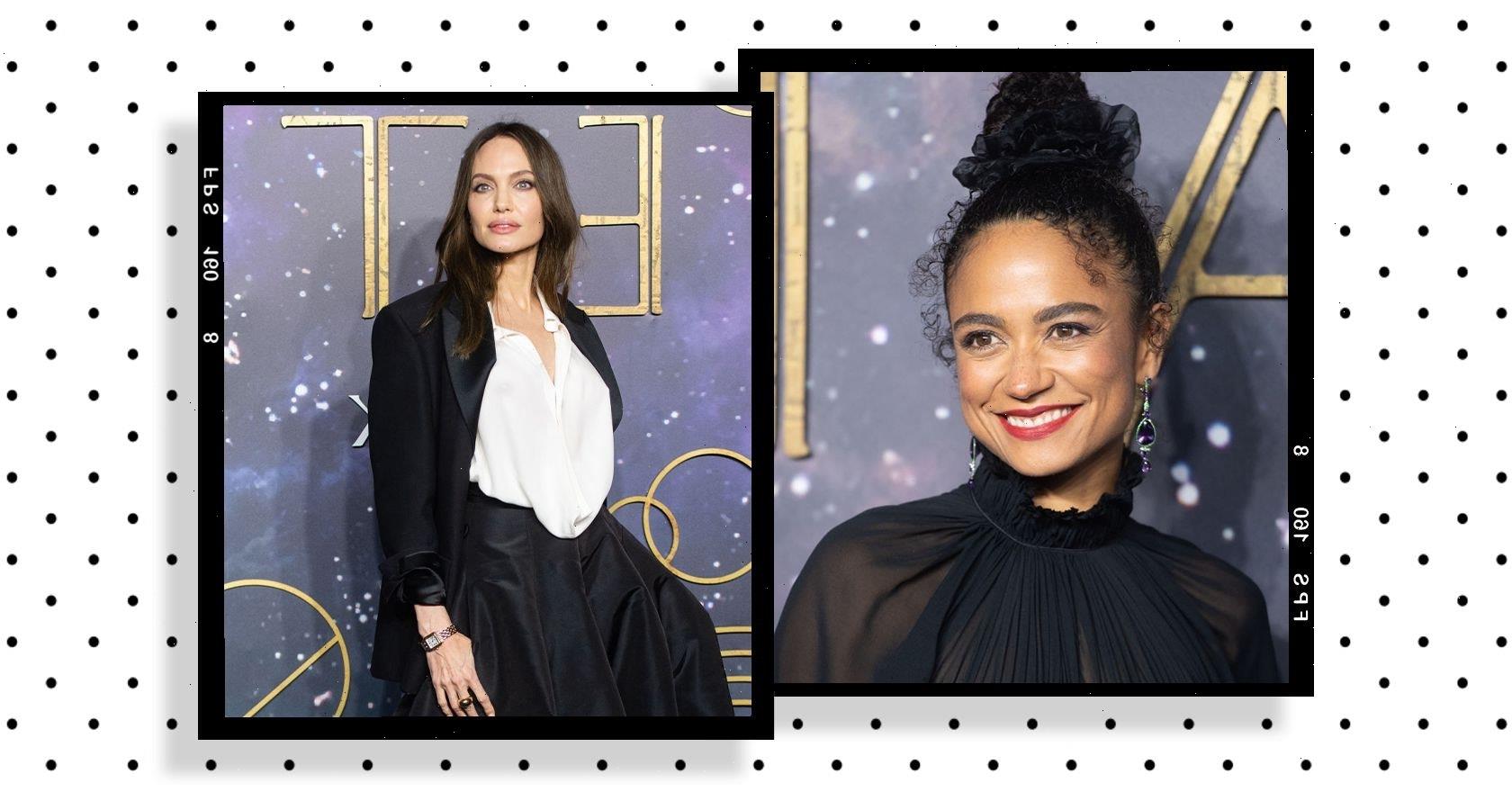 Following the release of Marvel’s Eternals, Stylist spoke to two of the film’s stars about being the latest superheroes to join the complex universe.

Marvel films always drum up a buzz and the latest release, Eternals, has certainly captured the attention of film-lovers worldwide.

The latest instalment to the franchise follows a large, star-studded cast of superheroes in their quest to protect planet earth. Salma Hayek, Gemma Chan (Humans) and Richard Madden (Bodyguard) all feature in the ensemble.

“Marvel Studios’ Eternals features an exciting new team of superheroes in the Marvel Cinematic Universe and ancient aliens who have been living on Earth in secret for thousands of years. Following the events of Avengers: Endgame, an unexpected tragedy forces them out of the shadows to reunite against mankind’s most ancient enemy, the Deviants.”

The Eternals themselves are immortal beings who we see live harmoniously throughout time, all the way from the deserts of Mesopotamia to the modern-day streets of Camden, London.

The latest Marvel film will be released in cinemas nationwide on 5 November.

While the movie does focus on the familial aspect of the Eternals, there’s a sense of individuality in the film. Each character has their own plotline, character arc and differing superpowers that see them unite in their fight to protect humankind.

Aside from being a hotly anticipated Marvel release, Eternals has also been praised for its inclusion of a prominent LGBTQ+ relationship, its racially diverse casting and the inclusion of Marvel’s first deaf superhero, Makkari, played by Lauren Ridloff. Alongside her, Angelina Jolie takes a starring role as Thena who succumbs to an illness known as Mahd Wy’ry, a dementia-like illness which leads her to forget who she is.

Stylist sat down with the two actors to talk about the film and what they want Eternals viewers to take away from the narrative.

Makkari is the first deaf Marvel hero. How did it feel to be part of a popular film in such a momentous role?

LR: Oh, it felt wonderful. To be honest, I loved every minute of it. But really, what’s most important to me is that this actually gives me a platform to talk about my experiences as a deaf Black Mexican woman.

I’m thrilled to be able to have the opportunity to shift the attention to subtitles and accessibility for deaf and hard of hearing people. But also, it’s beneficial for everybody who actually watches cinema – subtitles give you so much more information.

Also for me, it means that the deaf community finally has a chance to see somebody have Deaf Gain on the screen. Deaf Gain actually means that there are moments when it really is beneficial to be deaf. So I’m very proud to actually showcase that.

Generally, would you prefer viewers to see Makkari as a deaf character, or rather as a hero who happens to be deaf?

LR: Exactly the second part. That’s the other reason why I was so thrilled to be a part of this story about the Eternals. It’s a story about superheroes that really embrace their flaws, so to speak, and their differences.

This story focuses on that shared goal that we all have: love and empathy. My deafness and my character being deaf is just an additional layer. That’s it, it’s just a thing – it doesn’t drive the story. And I think that the timing for it onscreen is right now.

Angelina, your character is beloved yet flawed. How did it feel to play an imperfect superhero?

AJ: It felt very good. Especially when we think of children who are watching this – we don’t want them to have ideals of some perfect person to grow up to be; I think maybe that’s an old superhero way.

But Eternals shows that we want them to accept their own flaws as part of themselves. And they’re not even necessarily flaws, they’re something that just makes them more complex.

What stood out the most to you in Thena’s character?

AJ: I appreciated that there was going to be a superhero that was struggling with her mental health. I thought it was important to show that, especially to young people. It’s not about being able to find perfect balance and order for Thena to be strong; she is a very capable fighter who protects those she loves.

But she’s also somebody who is wrestling with the weight of her feelings, her emotions and the balance of her mind. That is more true to how people actually exist and it made me think often of soldiers or frontline workers with PTSD who carry on but do struggle.

The sense of family is clear to see throughout the film. Did that translate to behind the scenes also?

LR: Yes, most definitely. Especially with Angelina and also with Chloe, I feel like we always had that. Because it was directed by a woman, that sense of family really was the priority while we were shooting.

Chloe invited my whole family and I to go out on outings. All of us went out on boats together, we went to different islands while we were shooting on location. Angelina hosted, you know, movie nights with our kids, so they get to come together to have viewing parties.

Our whole time on sets, it was actually that kind of experience.

How proud are both of you to be in leading roles as female heroes? What do you want the impact to be going forward from both of your individual characters?

AJ: Well, I didn’t think about it as much as being a female. I think we’ve seen female strong characters but what was additional for this was the many different women but also that we were alongside very strong men. And we’re a family so I think that’s what was exciting about it.

Eternals isn’t highlighting one gender, one race, one person in any way.

LR: For me, it just means that you – as women – it’s an opportunity for us to create our own ideals. For example, Chloe (the Eternals director) actually told me, ‘I want you to run like a girl – own it.’ And I was like, ‘What do you mean run like a girl?’ Thus far, what we’ve seen on screen, are superheroes being what is considered to be very traditional masculine men.

I had a chance to bring something new.

I even looked to Olympic sprinters and female speed skaters, who I let influence my running style on screen. And I was just happy to be able to use real-life badass women as inspiration.

What do you think viewers, both young and old, will take from each of your characters?

AJ: The film is very much about the planet, all of the people on it and our collective humanity. So I think it focuses on our characters but it’s also how our characters are a part of the whole.

LR: I feel like the Eternals, each of them is a piece of the puzzle. They’re part of the bigger picture. I think our individual characters are necessary and they’re all valuable. But if one of us wasn’t there, I don’t think we would be able to have so much power.

So, I think it really celebrates the idea of community, of working together, collaboration. And I think in today’s society currently, we need to be reminded of that – the importance of working together and sharing that common goal. And when that happens, everything works.

Eternals is out in cinemas nationwide on 5 November.