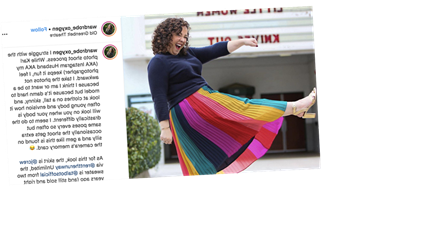 This is Please Like Me, BuzzFeed News’ newsletter about how influencers are battling for your attention. You can sign up here.

Influencing is harder than it looks, and that’s on purpose

It’s easy for me to snark on influencers and their work because sometimes the optics of their work are ridiculous. Last week at a coffee shop, I saw a woman gingerly peck at her latte as a cameraperson with very high-tech equipment filmed her for nearly 20 minutes straight.

I have to then remind myself this is just one (ridiculous) facet of her job. She probably spends hours planning for the shoot, editing the photos, fielding hundreds of emails from clients and brands, and then pitching the next thing. I just happened to see one tiny part of it.

That’s exactly what 45-year-old lifestyle microinfluencer Alison Gary (@wardrobe_oxygen) wrote about in a blog post last month. “I wish more influencers would share their real schedules, not these stupid ‘aspirational’ ones where it only includes making smoothies, going to the gym, having a brand meeting and a meditation session,” she wrote.

Alison has nearly 20,000 followers on Instagram, and she made the transition to ~influencing~ full time in 2017. She told me she’s worked a demanding corporate job, and she feels her current role is more challenging.

“Influencers get a bad rep for being unintelligent, lazy, out of touch,” she said. “I know what hard work is, and I know that this job in many ways is harder.”

In her blog, Alison details all the careful and tedious planning that goes into one fashion blog post: the styling, the photography, the writing, the SEO, the linking, the analytics, the cross-promotions of her content on various other channels. It takes her from sunup to sundown.

(The process is not all that different from writing this newsletter, BTW. Heh.)

“It’s like being the owner of a store — you’re never off,” said Alison. “You can go on vacation, but you’re never off. You’re constantly checking email, DMs. You’re always on. Yes, you’re able to go to Target at 3 o’clock in the afternoon, but you’re up till 11 p.m. writing your blog posts.”

Alison and I talked about why she thinks more influencers, especially those with huge followings, aren’t sharing more of the “real” behind-the-scenes work.

The simple answer is: This behind-the-scenes work is unglamorous. Influencers don’t traditionally build brands on being their entire selves; they build brands by performing an idealized version of themselves.

“I guess they’re supposed to be aspirational,” she said about big lifestyle influencers. “But it makes our jobs look more frivolous. … It’s creating a fantasy, and they don’t want to ruin the fantasy.”

Also, she noted, the brands that sponsor these carefully curated posts and pay their bills want influencers to project this kind of fantasy. It sells super well.

“Brands want us to be surface-level, happy, and very generic. They want us to have a very comfortable, easy look to our lives,” she said.

Alison said she loves writing about fashion and the unique day job she’s created for herself.

She’s hoping the people who denigrate influencers as superficial can be better aware of all the invisible work that goes into posting a pretty photo.

“I see a lot of negative talk about our jobs either on Reddit or various other places, and I sometimes get anonymous comments where people will criticize,” she said.

“I respect the hustle of most influencers because whether or not they make it look easy or tiring, it’s a hard job,” she said. “It goes beyond the work. … It’s the emotional aspect of it.”

And damn, can we not say that about all aspects of work and living?

Until next time — give yourself a lil’ more recognition for all the invisible labor that goes into being who you are and clocking in at whatever job you do. But I maintain that a 20-minute high-production photo shoot for drinking a cup of coffee is ridiculous,