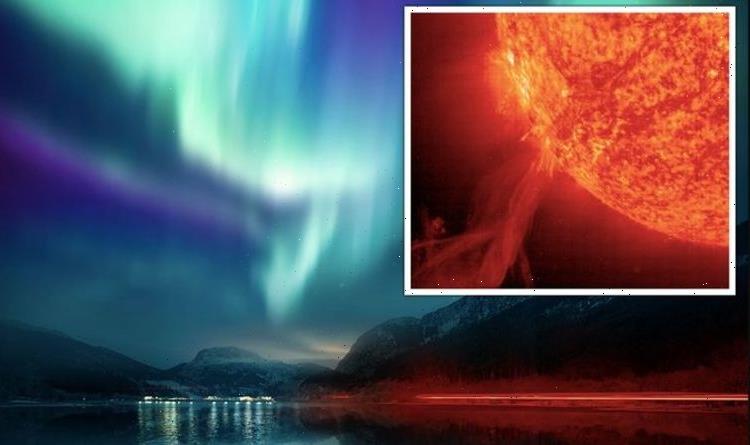 Carol Kirkwood reveals where you 'might see Northern Lights tonight'

Forecasters at the Space Weather Prediction Center (SWPC), a unit of the US Department of Commerce under NOAA issued a G2 geomagnetic storm warning for October 11. It will also mean that the aurora borealis, also known as the Northern Lights, will beam across the UK tonight. AuroraWatchUK, who issued the “amber alert,” predicted that the “minor geomagnetic activity” could also mean you can catch a glimpse of the spectacular Northern Lights in certain UK spots – should the sky remain clear from clouds.

According to Matt Taylor, BBC Broadcast Meteorologist and former Senior Operational Meteorologist with the Met Office, the breathtaking display could be seen across the northern half of the UK.

Others have tipped it to be seen “as far south as Yorkshire, maybe even further”.

Alex Beresford, ITV weather presenter, tweeted: “There’s a chance to see the aurora tonight, more so in the north.

“Lots of solar activity and a release of plasma from the sun is set to collide with Earth’s atmosphere amounting in this beautiful light display.”

But in the past, the Northern Lights have been spotted as far south as Kent.

There is also a chance that clouds could ruin your chances of spotting the mesmerising lights, so it is advised to stay away from big cities and polluted areas like motorways if you want to take good a peak.

But while stunning views may be on show for some lucky Northerners, there is also some cause for concern due to the G2 geomagnetic storm.

Solar storms are rated on a scale from G1 to G5 – with one being the weakest and five having the most potential for damage.

But even a G1 -level solar flare can cause havoc, and experts have suggested power grid fluctuations and minor impacts could cause disruption to space satellites.

When this happens, it has the potential to impact billions of people on Earth.

SWPC said in a statement: “Induced currents and power grid fluctuations can occur.

But, for now, it has been tipped to only cause “minor” disruptions.

Space weather physicist Dr Tamitha Skov tweeted: “This solar storm will be a minor inconvenience with amateur radio & GPS users being the most adversely affected.

“National power utilities have procedures in place for a G2-level storm like this.”

Major solar storms have lashed the planet in the past but these occurred before the advent of the Internet, satellite technology and high-speed communications.

The biggest solar storm on record occurred in 1859 and is known as the Carrington Event.