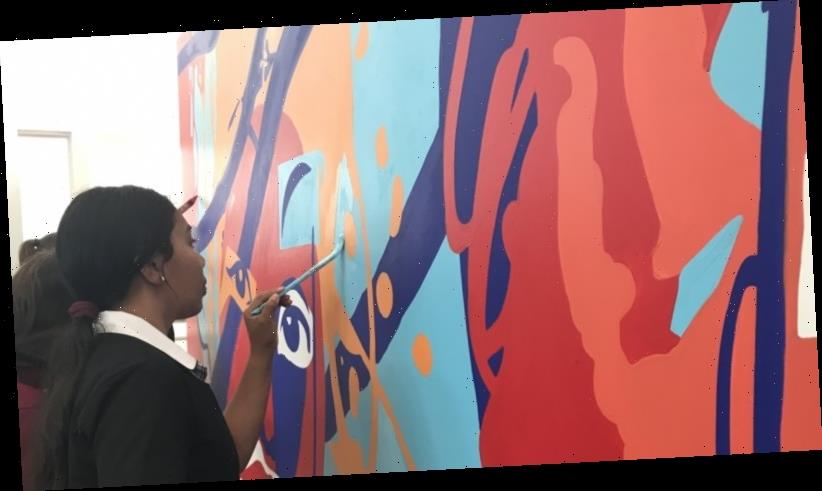 Growing up somewhere like Frankston can be tough, especially for a teenager, says local schoolgirl Paige. Coming from one of Melbourne's lowest socio-economic suburbs, she says you're stamped with a label, people assume that you'll drop out of school, that you're going to commit crime, that you're not going to amount to much.

In can almost seem easier to conform to that stereotype than to challenge it, she says. Paige is taking part in Project O, a family violence prevention initiative for girls aged 10 to 16 in Frankston. It involves them to work with mentors to make art, learn new digital skills and to tell their stories, in the process building confidence and opening their minds to possibility. 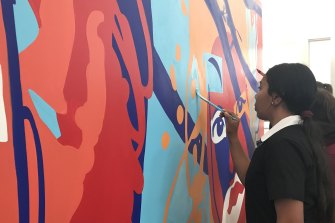 Created by social impact arts organisation Bighart, it is targeted at regional, remote and high needs communities around Australia. Frankston North has the third highest crime rate in Victoria, high rates of unemployment and high rates of violence against women.

The Frankston program operates in Mahogany Rise Primary School and Monterey Secondary College and is run by actor Natalie O'Donnell, along with two workshop facilitators. Some girls opt into the program, others are recommended for it by teachers and principals. The end result is a range of young women involved, with an array of experiences and backgrounds; they meet at least three times a week during the school year.

Domestic violence campaigner Rosie Batty is a strong supporter and has been involved with Project O since its pilot in north-west Tasmania in 2015. She relates to the circumstances of girls from disadvantaged areas, having grown up in one herself. Many of the girls she has met through the project were socially isolated and gained immense inner confidence and belief in themselves through their involvement.

Batty says it's very easy for your social constructs, your family and the community around you to limit you. "If you stay in that small space, surrounded by the same people, it's very hard for things to change. It takes a lot to change that and not be held back." 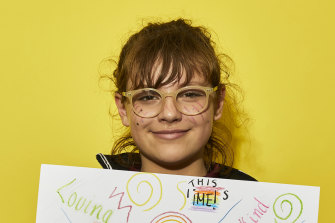 Kiah with artwork created as part of Project O in Frankston.Credit:Nicole Reed

Bighart's director of Project O nationally Genevieve Dugard says the aim is to provide expanded pathways and horizons for the girls that they may not have seen before.

The first step is to build a safe space and to build trust with the mentors, artists from across various genres; singer Monique Brumby and actor Kate Mulvany are two who've been involved thus far.

The program starts with a preconception that every participant has something valuable to say. "It can be hard for the young woman to grasp that, but once it clicks that she's safe that she's backed to step up and say something, it's pretty remarkable to watch," Dugard says. "There are some common themes, not of a lack of aspiration, but a lack of confidence and opportunity to explore the aspirations they do have." 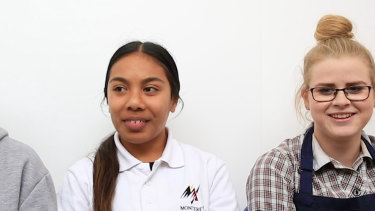 Through the workshops the girls tell their and their community's stories, via film, audio, visual arts and digital media. They are then supported to host local events, which they MC and host, providing hands on experience and raising their visibility locally.

The Project O girls will present their art at an event on Friday at the Frankston Mechanics Institute. Guests include Batty, Peta Murphy MP for Dunkley and the Victorian Commissioner for Children and Young People Liana Buchanan.

The initiative has been rolled out in other states, including north-west Tasmania, Roebourne in WA, Cooma in NSW and Canberra. In May, Canberra's Government House will showcase work made by Project O participants nationally. 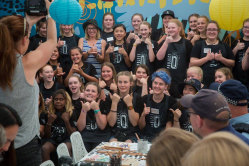 Rosie Batty and Project O participants at the NGA in Canberra in 2017.Credit:Shelly Higgs

Winner of a Vic Health Award last year and a Human Rights Award in 2016, Project O is intensive, long-term work. "The art we make to tell the story of those young women and these communities is really the tip of the iceberg," says Dugard.

Bighart commits for five years, with about 20 young women going through each year. By the end of that time, 100 women are equipped with increased confidence and new skills. "We want the change to stay with the community," says Dugard. "And that the opportunities for these young women continue to build as the community sees what they can do."