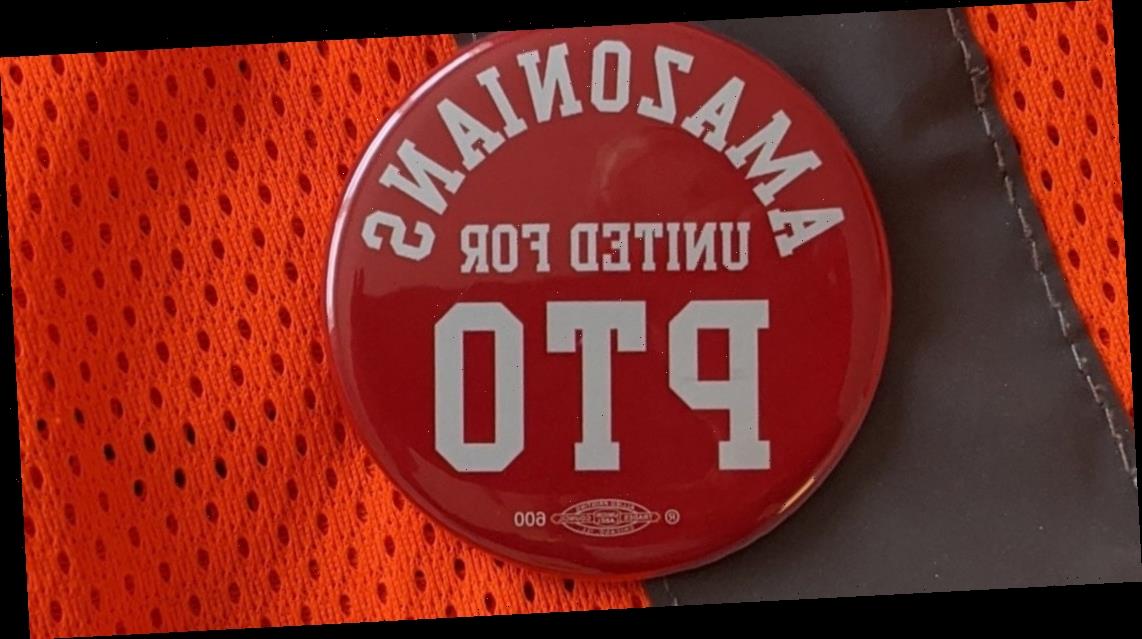 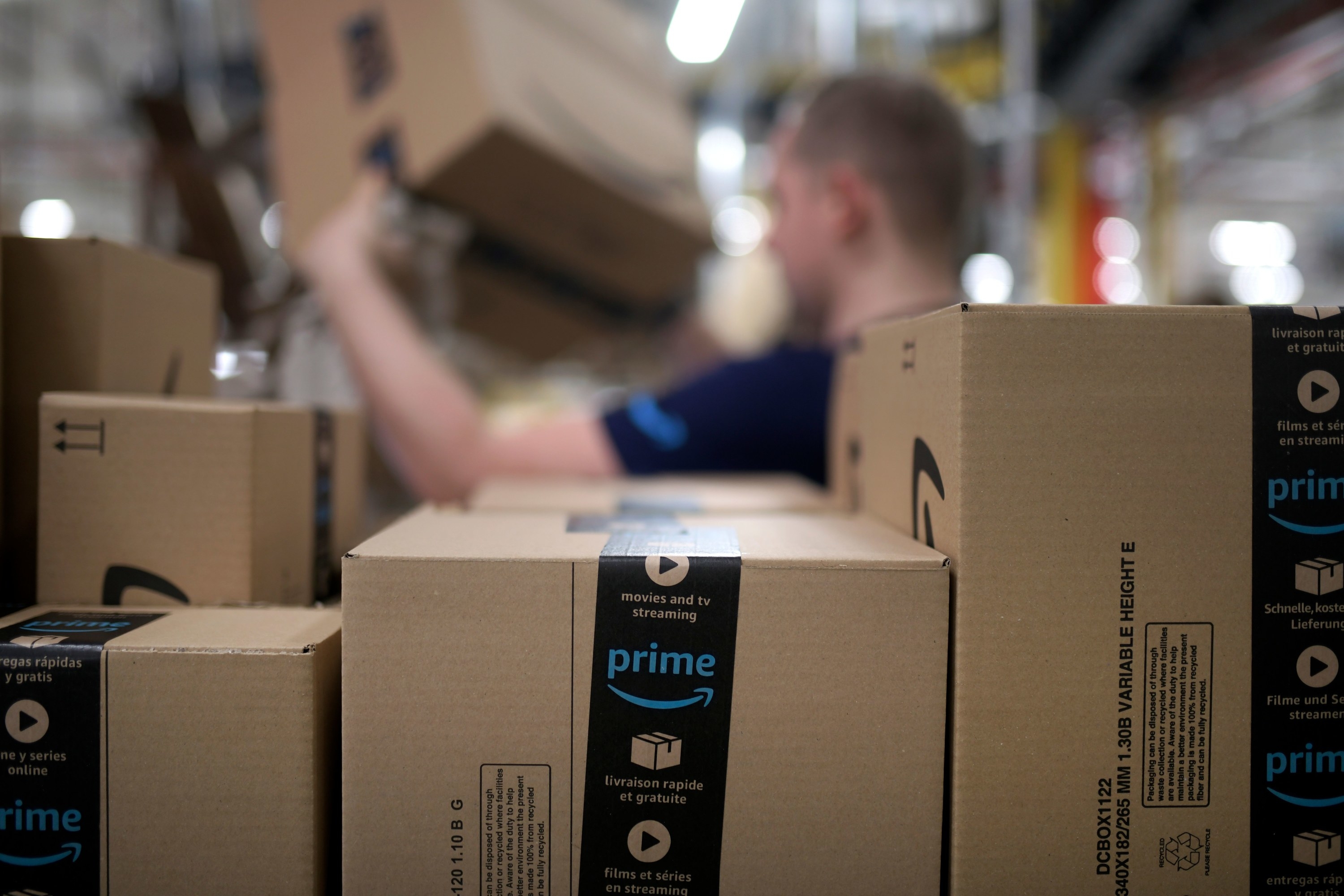 In violation of county law, Amazon failed to provide hundreds of employees in its Skokie, Illinois, delivery station with paid sick time — until workers at the facility said they intervened.

The e-commerce behemoth has failed to comply with the requirement since the Skokie facility opened in October 2019. Workers there are part of a growing number of Amazon delivery and fulfillment employees who are demanding better conditions.

The Skokie delivery station is located in Cook County, Illinois, where providing workers with one hour of paid sick leave for every 40 hours worked has been the law since July 1, 2017. But Amazon employees stationed in Skokie said that prior to this week, they’ve received no sick pay whatsoever. Instead, they said they were given demerit points against their records for missing work or leaving early due to illness. Employees who reach 13 such points can be terminated.

Amazon employees in Skokie first inquired about their legal right to paid sick time in a meeting with an on-site HR representative and three warehouse workers in late February, a worker present at that meeting told BuzzFeed News. The following Monday, one of those workers publicly inquired about sick time on a “Voice of Associate” whiteboard Amazon maintains for employees to share their concerns. Local Amazon managers replied to the question writing “thank you for the callout!” The question was later erased, the warehouse worker said.

On Monday, March 2, a warehouse worker asked for a “paid sick time update” via the same whiteboard. Amazon management responded the same day, writing out a message, a photo of which was provided anonymously, that read:

“Thank you for the outreach. We regularly audit our payroll and time systems and recently identified a discrepancy in the sick time you accrue. We have a team working to correct this error and will provide updates ASAP. We appreciate your understanding and please know you can reach out to HR or myself with any other questions.”

Tomás Uriostegui, an Amazon employee at the Skokie facility, told BuzzFeed News that after HR’s message appeared on the whiteboard, he received 33 minutes of paid sick leave via the company’s online employee hub. But Uriostegui, who’s worked in the facility since last December, believes he’s owed closer to 12 hours in paid sick time given the number of hours he’s worked.

“We need the money that you owe us from last year,” Uriostegui said. “According to the law, [you] owe us that.”

Another Skokie employee who identified herself as Ashley told BuzzFeed News she’s worked for Amazon since Nov. 21, 2019, but had only accrued one hour of sick time by the start of her overnight shift on Wednesday. “It frustrates me because we have a HR department and they should have been on this from the beginning,” she said.

Workers at Amazon’s Skokie warehouse said the company has yet to issue an official communication about sick time beyond the message written on the whiteboard pictured above. They plan to present Amazon management with a petition demanding accrued sick time be backdated to their hire date, and that employees who accrued demerit points due to illness have their records cleared. As of late Wednesday night, Uriostegui’s employee hub account showed he had just 33 minutes of sick time available — far less than he believes he’s earned.

Amazon said it’s in the process of providing the Skokie employees with all the sick time they would have accrued since their date of hire.

The Skokie delivery station is less than 20 miles north of an Amazon facility on Chicago’s South Side, which is among the company’s busiest in the country. Employees at that facility have been organizing since last summer, when they requested air conditioning after some workers became sick during a record-breaking heat wave.

In recent weeks, the Chicago employees have been agitating for paid time off after learning that they, like some Amazon employees in Sacramento, earn no paid time off even though an Amazon employee manual says the company “believes that associates should earn and take vacation on a regular basis for their personal well-being” and that “regular associates working 20 or more hours per week accrue vacation during each pay period.”

Though they work more than 20 hours per week, Amazon doesn’t classify members of its Chicago delivery station staff as regular workers and doesn’t give them paid time off. In protest of this policy, a group of workers calling themselves DCH1 Amazonians Unite have been raising awareness around the issue in the warehouse, and circulating a petition that demands “equality with other Amazon Part-Time Associates who receive PTO and Paid Vacation Time” as well as a meeting with regional manager Daniel Reyes. As of Monday, the document had more than 250 signatures.

Chicago Amazon employee Ted Miin, a member of Amazonians United, told BuzzFeed News that in January he was approached by Amazon site lead Domonic Wilkerson, who questioned him about the newsletters being distributed to workers during breaks. Miin said he felt singled out by the inquiry. On Feb. 7, he filed a charge with the National Labor Relations Board, claiming he was being intimidated and surveilled.

“I said, ‘There are many people in the group. Why are you targeting me specifically?’” Miin told BuzzFeed News. “I said, ‘I feel targeted.’” 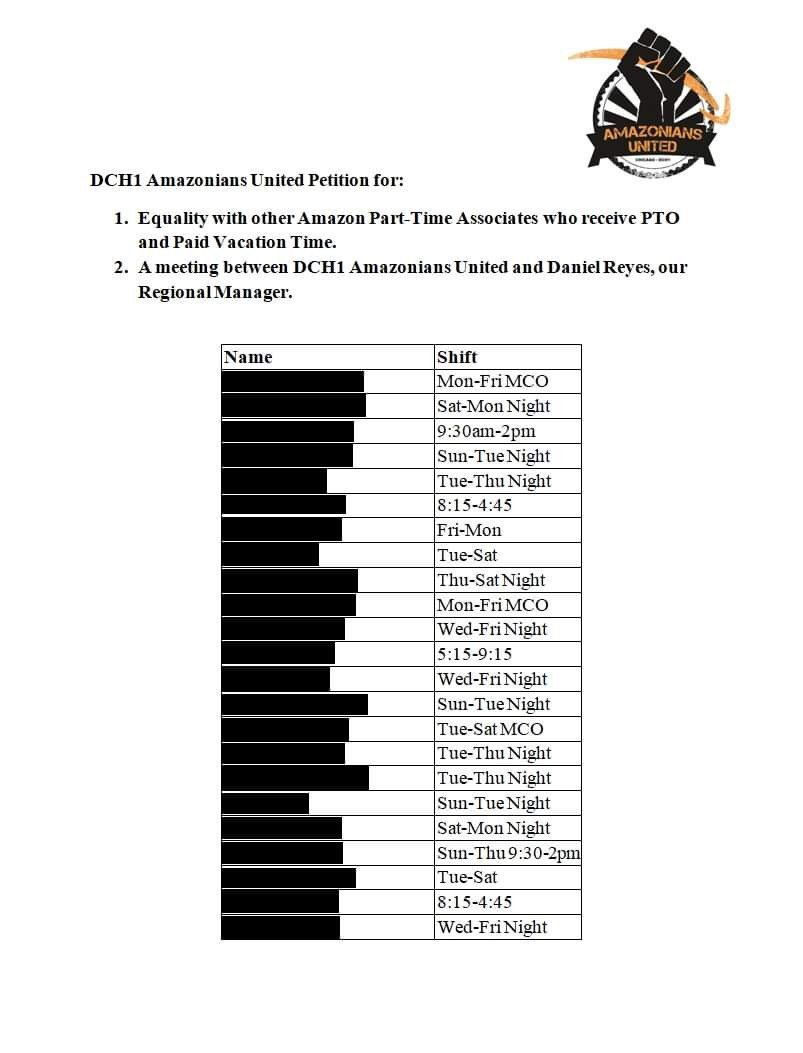 In a letter to management dated Feb. 17, Chicago workers write, “When we first raised the question, management claimed that due to our employee classification as ‘class Q’ employees we are not able to receive such benefits.”

“As employees of Amazon, we should enjoy the same benefits as our other counterparts regardless of worker classification. We cannot accept being treated as an inferior class of workers,” the letter goes on to say.

Members of Amazonians United Sacramento petitioned their managers over the same issue in December. At the time, Amazon told BuzzFeed News that “benefits vary based on a variety of factors.” Delivery station employees in Sacramento do not receive PTO and are still classified as “class Q.”

The Chicago Amazonians United group told BuzzFeed News that Amazon management has repeatedly declined to meet with the group. The organization also claimed that local Amazon managers denied its request for a meeting with Reyes.

An Amazon spokesperson told BuzzFeed News that warehouse worker, “[b]enefits vary based on a variety of factors, including working hours.”

“Amazon maintains an open-door policy that encourages employees to bring their comments, questions, and concerns directly to their management team for discussion and resolution,” the spokesperson continued. “We believe direct communication is the best avenue to discuss feedback, and our teams onsite are speaking directly with the employees in the Chicago area to hear their questions and discuss options that are available.”

Last month, Jay Carney, Amazon’s senior vice president of global affairs, penned an op-ed in the New York Times in which he argued that communities and workers benefit from Amazon’s growing logistics operation. “[W]e not only pay our hourly workers significantly better than most of our consumer retail competitors, we also provide the same comprehensive health insurance and parental leave benefits to our lowest-paid associates as we do our most senior executives,” Carney wrote.

Asked for comment on Carney’s statement given the sick pay violations and lack of paid time off described above, Amazon said the warehouse workers in Skokie, Chicago, and Sacramento aren’t eligible for paid time off as part-time employees, but can make a request to be transferred to full-time jobs in other facilities.