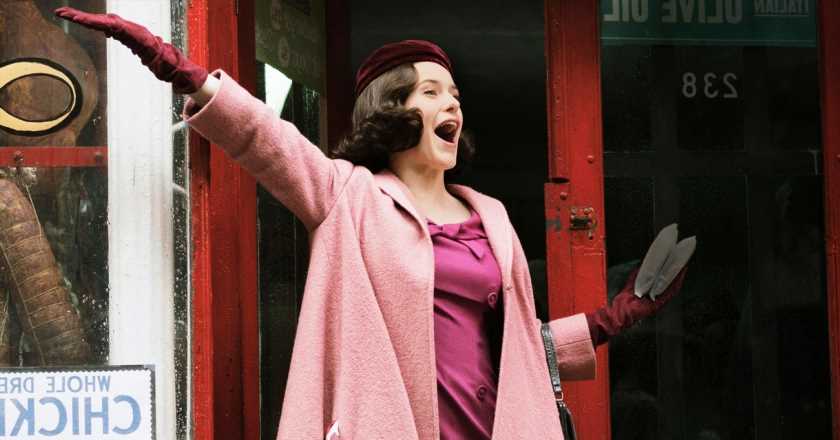 Rachel Brosnahan is set to return as The Marvelous Mrs. Maisel in season four, and we just got our first look at Midge after her unexpected firing.

Updated on 16 July: Hold onto your very fancy designer hats, folks: Amazon have just released the first-look photos from the upcoming fourth season of The Marvelous Mrs. Maisel, and it’s safe to say that Midge is a whole 2021 mood.

The first image shows Midge (played by Rachel Brosnahan) sprawled on a pile of colourful costumes in a dressing room looking completely dejected. At the end of season 3, Midge was unexpectedly fired from Shy Baldwin’s international tour and is now at risk of losing her new apartment, so it seems that the new image hints at the fallout from the finale.

The second image features a rather jollier Abe (Tony Shalhoub) and Rose (Marin Hinkle) sitting together eating TV tray dinners in their living room in what’s a decidedly stark change from their former lifestyle. They’re gazing wide-eyed at the screen – but at what, we wonder…

Fans of Gilmore Girls, assemble: the cast of The Marvelous Mrs. Maisel is getting an exciting new character. Kelly Bishop, who is best known as matriarch Emily Gilmore in the TV series, has joined the cast. Although we don’t have any details on who her character is, a short video shows an impeccably dressed Bishop looking very, very stern (and check out that multi-coloured suit).

Bishop’s arrival will mark her reunion with Amy Sherman-Palladino, who created both The Marvelous Mrs. Maisel and Gilmore Girls. It’s also been announced that This Is Us actor Milo Ventimiglia will join the cast for season four.

To celebrate the news, let’s take a look at everything we know so far about the upcoming season…

We have the most marvellous news during this dreary winter lockdown: Midge Maisel is returning to our screens.

Yes, season four of The Marvelous Mrs. Maisel (one of the best Amazon Prime Video series ever) has finally started filming. This means that Midge – the impeccably dressed and hilarious 50s-housewife-turned-standup-comedian – is about to bring some sunshine back into our lives.

Rachel Brosnaham, who of course plays the Emmy-winning titular role in the show, just shared a behind-the-scenes photograph of filming on her Instagram feed.

“It looks a little different this year… but we’re back! Working away on @maiseltv season 4.” Brosnahan captioned the photograph, which showed her staying protected under a clear umbrella.

It comes after production was postponed due to – you’ve guessed it! – the coronavirus pandemic. Although we don’t know when the new series will hit Amazon Prime Video, season 4 is expected to air sometime in early 2022.

What is The Marvelous Mrs. Maisel about?

If you are yet to get comfy on the sofa and watch The Marvelous Mrs. Maisel from the start (honestly, where have you been?), here’s what you need to know in a nutshell: Midge Maisel is a 50s Jewish American housewife who lives a seemingly perfect life in New York’s Upper East Side. But one evening, her husband Joel – who she has two children with – says he is leaving her to start a new life with his secretary Penny Pann.

Midge reacts by uncharacteristically swigging a whole bottle of wine, jumping on the subway in her nightgown and heading downton to the Gaslight Club, where she ends up performing one hell of a stand-up routine that changes her life forever…

Rachel Brosnahan is perfection at The Marvelous Mrs. Maisel.

What happened in The Marvelous Mrs. Maisel season 3?

In season three, Midge and her long-suffering manager Susie went on tour around America with world-famous singer Shy Baldwin. Her star was finally rising and she was set to continue the tour with Shy in Europe. However, during her huge set at the Apollo in Harlem, Midge made some misjudged suggestive jokes about Shy’s sexuality (after promising not to expose his secret about being gay). In the last scene at the airport, Shy’s manager Reggie told Midge she was no longer a part of the tour.

What will happen in The Marvellous Mrs. Maisel season 4?

“Costume fittings are happening [now], sets are being built like mad. All of the stuff is happening,” series creator Amy Sherman-Palladino said when production started last October. “We’re breaking our stories, we’re writing. And then… we’re dragging the actors in and we’re going to table read the scripts.”

No details about what happens in season four have yet been shared, but it looks like Midge and Susie are back to square one. Will Midge make amends with Shy? Will she and Susie be able to continue working in comedy full-time? What about her growing relationship with fellow comedian Lenny Bruce? And, perhaps most importantly, what’s in store for the real stars of the show – Midge’s parents Rose and Abe?

We cannot wait to find out.

In the meantime, you can catch Brosnahan playing two completely different roles in 70s thriller I’m Your Woman and Cold War spy drama The Courier.