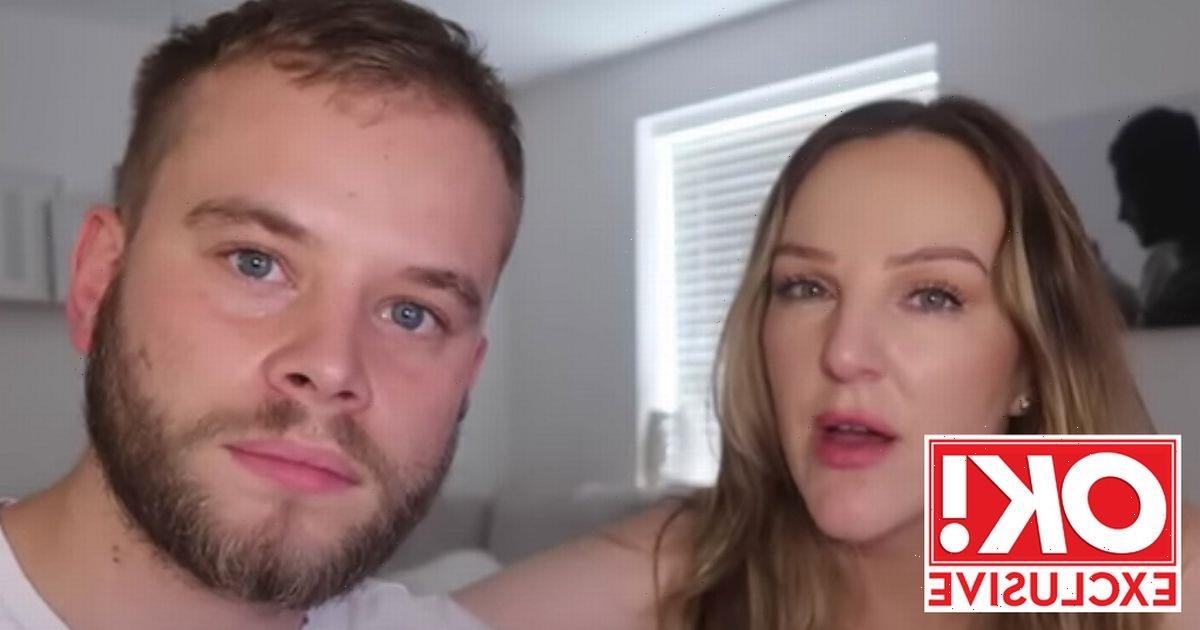 In October 2021, Youtube and TikTok sensations Lainey Clark, 35, and Ben Hubbard, 23, told us all about the ghosts and ghouls in their home. The teachers from Buckinghamshire have lived with two spirits – Dave and Andy – since 2018, and creaking doors, footsteps and flying objects are part of normal life.

One year on, now with a baby, Apollo, in tow, the couple share shocking updates to their out-of-this-world story…

"I vividly remember the moment I died on the operating table when Apollo was born. My lungs stopped working, I couldn’t use my voice or move my eyes. I had no way of telling the doctors that I was suffocating. The last thing I heard was them saying my heart had stopped.”

On 28 February this year, Lainey and Ben welcomed their son Apollo into the world, but during her difficult labour, Lainey died for three minutes. Before her Caesarean section, doctors injected a nerve block (a numbing agent) into her back. But the medicine travelled too high and shut down her organs. For those minutes, experts fought to bring the new mum back to life. Meanwhile, she was in a void. “I was nowhere, but somewhere, forever and for no time at all. It’s hard to describe the overwhelming peace I felt. I didn’t want to leave,” she confesses. “My two grandmothers and my mum [all of whom have passed away] appeared, smiling at me. I couldn’t reach them, but I felt their love.”

What happened next will stay with Lainey forever.

“I spotted a young, fresh-faced man with 80s-style floppy hair standing behind them. He was tall and so handsome, around 20 years old,” she smiles. “It was only when I woke up that I realised who it was – Dave, the spirit who haunts our home.

“It clearly wasn’t my time to die as after seeing Dave I felt a falling sensation and awoke back in the hospital recovery room. That’s when I was reunited with Ben and our newborn son.”

Lainey was kept in hospital for a few days following her traumatic ordeal. One night, as Apollo lay snoozing, Lainey saw the cot rocking by itself – but she had an explanation.

“I knew it was Dave looking out for me, so I wasn’t scared,” she smiles. “Dying was the most profound experience I’ve ever had. I always believed there was an afterlife, but now I’m certain. We go on, and it’s beyond anything we can comprehend.”

The spirit-savvy couple made sure to prepare Dave for Apollo’s arrival.

Upon moving into the new-build property in 2018, the couple invited a medium called Sam to investigate their creepy lodgers. Dave died in a car crash and has a physical bond with Lainey – meaning he touches her sometimes. Andy, who’s less present in the home, is Sam’s late brother.

Sam returned before the birth to help set boundaries for keeping Apollo safe.

“Now Dave knows he can’t come near me when I’m with Apollo, and he’s banned from our bedroom,” explains Lainey. “We were sceptical because Dave is so independent, but there’s definitely less activity now.”

Instead of throwing coffee cups in front of the telly, Dave potters around in empty rooms. It’s a sign of respect, says Ben.

“Strangers would tell us, ‘You can’t bring a child into that environment, it’s dangerous.’

But Dave’s presence is comforting, like a house mate. He’s respectful and caring, and we’re the same in return. Living with spirits isn’t like a horror movie. If someone is nice in life, they won’t be horrible in death.”

As soon as Lainey was expecting, Dave’s paranormal activity calmed down.

“Throughout my pregnancy, I’d feel Dave’s warm hand on my shoulder as I did chores around the house. I’d always thank him aloud,” recalls Lainey. “I think he foresaw my near-death experience and wanted to offer some comfort.”

Dave even helped them when it came to deciding baby names.

“Every name we liked we’d then remember a naughty school kid we’d taught – it was a nightmare,” laughs Ben. “We did a spirit box session [one person asks questions and another sits blindfolded with headphones on and relays messages from the spirit world] and the word Apollo was spoken. We listened back after he was born and were stunned to find that Dave had named our baby.”

As a newborn, Apollo was hard to settle. When he cried, Lainey and Ben felt the energy shift around them. Dave wasn’t a fan of his wailing, but he never acted out around the baby. The spirit kept his distance, but the new parents heard him knocking things around the house. “One day I was getting Apollo to sleep and Dave started playing with our squeaky door handle. I put on my stern face and said, ‘Don’t you dare wake the baby!’ He soon stopped,” laughs Lainey.

Little Apollo has shown signs that he’s making friends with their paranormal lodger, too.

“He’ll stare for ages or giggle at a blank space,” says Ben. “At night we watch him on the monitor reaching to touch something that isn’t there. We have a painting of Lainey’s mum in our living room and he’ll babble and smile at it. He never met Lainey’s mum, but he’s not like that with other pictures.”

As their son grows up, his parents will keep a close eye on any spirit activity and teach Apollo that seeing ghosts isn’t usual – but it’s OK.

“We’ll make sure he has a good understanding of the spirit world when he goes to school. Kids can be so ruthless,” says Lainey. “Imagine if he told his friends, ‘I live with spirits’?”

For four years, thousands of fans have followed the couple’s paranormal adventures. But that might change as they have decided to move.

Ben explains: “Apollo is our top priority. Dave is protective and we’re confident he’d never harm Apollo, but this isn’t the environment we want him to grow up in.”

The family now plan to move to Northumberland, one of the UK’s most haunted counties. They’ll miss Dave if he stays put, but they say he’ll never be far away.

“My heart and soul tells me Dave will look after us no matter what,” says Lainey. “If he wasn’t with us it’d feel like we’d lost a friend. But we’ll never stop reaching out. If activity doesn’t come to us, we’ll find it!”