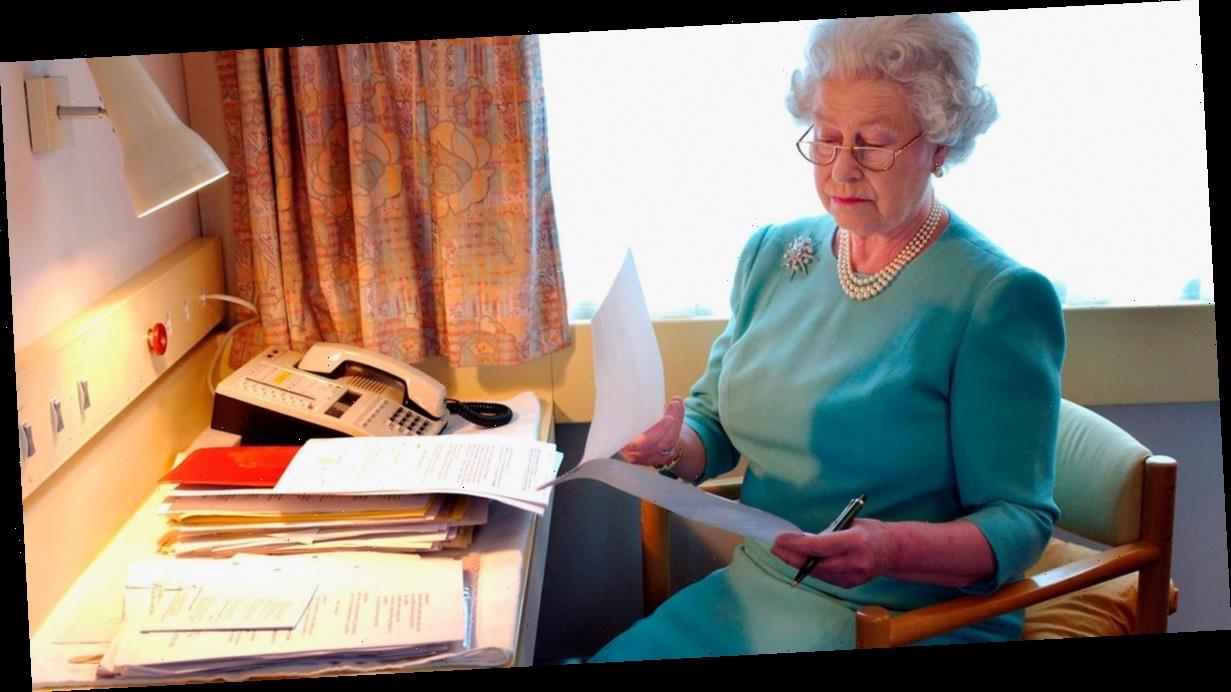 Until the glorious day they welcome a fly-on-the-wall camera crew into their homes Kardashian style , the question remains – what exactly do the Royal family do all day?

We see them out and about on public engagements every few weeks, but what do they do the rest of the time?

Do they spend hours on the sofa in their PJs, eating cheese straight from the packet while binge-watching Netflix and Googling themselves?

Or do they wile away the hours trying on their jewels, eating five-bird roasts and getting squiffy? Sadly it's neither of these scenarios (that we know of).

As Meghan Markle and Prince Harry prepare for their new lives after quitting the Royal Family and stepping back from their duties, we've had a look at what EXACTLY they – and other members of the Firm – get up to every day.

Despite being 93, the Queen has a very, very busy schedule.

Typically she's woken up at 7.30am to bagpipe music . Then it's paperwork time.

The Queen spends her days answering letters, doling out knighthoods, having meetings with her staff and meeting and greeting diplomats, bishops, judges and military top dogs .

Because she's the Queen and has to be organised, she reportedly allocates 20 minutes to each and knows, subliminally, when those 20 minutes is up.

In recent years the Monarch has started to hand some of her patronages down to younger members of the family, including Kate and Meghan, to lighten her load slightly.

When her paperwork and meetings are done, it's thought she takes her dogs for a walk.

In the early evening, she studies a report of the day's parliamentary proceedings and on Wednesdays she has an audience with the Prime Minister. She's also said to enjoy photography as a hobby, just Harry and Kate.

Like the Queen, Charles has to keep up to date with everything going on in the government so spends time each day going through official state papers.

He also heads up 13 Prince's Charities, including The Prince's Trust, The British Asian Trust and Business in the Community.

So presumably all of these keep him busy.

A keen gardener, Charles has also authored two books on ecology, Harmony: A New Way of Looking At The World, and On the Future of Food.

Not only that, but he also devotes time to another hobby of his, watercolour painting, though the reviews have not been kind.

In his role of heir, Charles is in charge of the Duchy of Cornwall – a private estate established by Edward III in 1337.

It covers 52,760 hectares across the UK, including farms, residential areas, commercial buildings and quarries.

It provides a huge amount of revenue each year, which is used to fund the public, private and charitable work of Charles, William and Harry and their wives.

As the boss, Charles is responsible for overseeing it all, with the help of a team of 150 employees.

Camilla supports her husband Charles as he carries out his royal duties.

She also carries out her own solo engagements, and has become patron or president of more than 90 organisations and charities since joining the royal family.

Even when she's not visiting the charities, Camilla will be keeping up to date with her work.

As well as being step-mum to William and Harry, the Duchess has two children of her own – Laura Lopes and Tom Parker Bowles – and grandchildren, who she spends a lot of time with.

Since quitting his part-time job for the East Anglian air ambulance, Prince William has focused on parenting and royal commitments.

In the past he has faced criticism for being "workshy", but he spoke about his readiness to take more on in an interview with the BBC. He said: "I'm a new father and I take my duties and my responsibilities to my family very seriously and I want to bring my children up as good people with the idea of service and duty to others as very important."

Since moving back to London, William has taken on a number of royal responsibilities from his grandmother the Queen.

In his spare time, William is into sports and enjoys skiing.

The Duchess of Cambridge

Kate is also a very hands on mum to George, Charlotte and Louis but she has a lot of royal duties and responsibilities.

She recently spoke of her 'mum guilt' , saying she feels bad whenever she leaves her trio at home to go to work.

When Giovanna Fletcher asked her if she struggled with it, she said: "Yes absolutely – and anyone who doesn't as a mother is actually lying.

"Yep – all the time, Even this morning, coming to the nursery visit here – George and Charlotte were like 'Mummy how could you possibly not be dropping us off as school this morning?'

"It's a constant challenge – you hear it time after time from mums, even mums who aren't necessarily working and aren't pulled in the directions of having to juggle work life and family life."

Much of Kate's charity work is angled towards children, with her latest project being the 5 Big Questions survey.

Eagle-eyed royal watchers have spotted her on the school run and taking the kids swimming at the pool in Buckingham Palace.

In 2017 she also teamed up with her husband and Prince Harry to launch Heads Together.

Until the end of last year, Meghan and Harry's day to day would have been fairly similar to Kate and Wills.

They spent their time caring for son Archie and working with the patronages and charities.

Harry is president, ambassador or patron of a number of organisations including African Parks, Rugby Football Union, Sentebale and Rhino Conservation Botswana.

He also set up and is now patron of the Invictus Games, a competitive event for wounded, injured or sick servicemen, women and veterans.

Shortly after joining the Royal Family in 2018, Meghan also took on a number of Patronages.

Like her husband, she picked causes close to her heart including The Royal National Theatre, animal charity Mayhew and Smart Works, which helps women get back into work through fashion.

But from April it will be all change, as the couple step back from their royal lives.

They have said they will continue working with their existing charities, but will face geographical challenges as they will be based in Canada most of the time.

As they are no longer royal and plan to be financially independent, the couple will be free to earn their own cash – and experts believe they could earn millions .

Even though they've been banned from using the word 'Royal' in their branding, it's not likely to impact their earning potential because of their global reach and links to the rich and famous.

Harry and Meghan are already developing links with investment banking giants as they plan to rake in millions.

Last month it was reported that  billionaire business moguls are desperate to bring the couple to play a starring role  at the World Economic Forum in Davos next year.

The York sisters are the most senior royals who aren't 'working royals', which means they have to go out and earn their own cash.

Beatrice works in finance and consulting, and she's currently the vice president of partnerships and strategy at software company Afiniti.

Referring to her as Beatrice York, the company's website states: "Beatrice is responsible for the management of the strategic Afiniti partnerships as well as company growth through unique initiatives and client development.

"She received a degree in History and History of ideas from University of London, Goldsmiths College."

Both princesses are also involved with a number of charities and not-for-profit organisations they are passionate about.

Beatrice will also be busy planning her royal wedding at the moment, which will take place on May 29.

Like their royal cousins, the Tindalls are also non-working royals which means they have to go out to work as well.

Princess Anne made the decision not to give her kids royal titles, which means Zara had one of the more normal royal upbringings.

This also allowed her to have a career of her own as she's not restricted by a HRH.

She's a hugely successful equestrian and in 2012 became the first member of the Royal Family to win an Olympic medal – taking the silver at the London games.

In 2006 she was named Sports Personality of the Year.

She has been the face of a number of huge companies, including car and baby brands.

Husband Mike has now retired from his career as a rugby player. He appears on a weekly podcast House of Rugby, where he occasionally shares royal secrets.