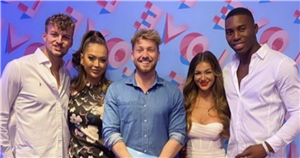 Love Island 2021 came to an end on Monday, August 23, after fans voted Liam Reardon and Millie Court their winners.

The show's viewers have been left not knowing what to do with their evenings after the ITV2 dating show kept everyone entertained six nights a week over the past two months.

Thankfully, we don't have to wait too long for our Love Island fix as the couples are all set to reunite for another episode.

Rumours of the reunion episode had been floating around for a while, but contestant Liberty Poole has confirmed its air date with her followers.

The Brummie beauty, 21, left the show after a shocking twist saw the former Nando's waitress dumped ex-boyfriend Jake Cornish, 24, only days before the final.

However, her shock exit hasn't impacted her post-villa career prospects, with Liberty already racking up an impressive 1million followers on Instagram, despite only having 7,000 prior to her appearance on Love Island.

During a candid Q&A session with her fans, Liberty admitted that she too cannot wait for the Love Island reunion as she admitted she's missing her co-stars.

After one curious fan quizzed the reality TV bombshell on whether or not she intends to stay in touch with all of her former co-stars, Liberty insisted that she cannot wait to see her villa pals again.

She confirmed on her Instagram Stories that the reunion is set to air on ITV2 on September 5.

Responding to the question, Liberty penned: “Definitely. We was all a massive family in there.

“Can’t wait to be reunited soon. Miss her loads and everyone. Love Island Reunion is on September 5.”

Love Island fans can expect some drama from the show as previous reunions have been pretty explosive as salt is thrown in old wounds and new romances between dumped islanders are revealed.

It comes after Millie and Liam – who are now officially boyfriend and girlfriend – made history as the first ever villa bombshells to win.

The lovebirds, who were an exclusive couple until Liam popped the question ahead of the final, triumphed over fellow finalists Chloe Burrows and Toby Aromolaran, Faye Winter and Teddy Soares and Kaz Kamwi and Tyler Cruickshank.