Poh Ling Yeow is a chef, author, artist and presenter who has done two tours of duty as a MasterChef contestant and hosted the series Poh’s Kitchen and Poh & Co. She will soon be seen resuming hosting duties on the second season of Snackmasters. 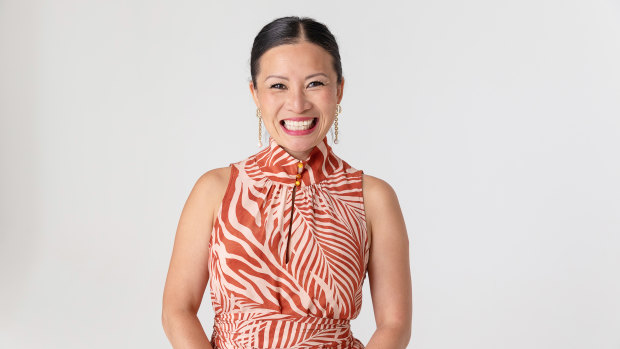 Why are we still so keen on watching food on TV – given that TV is a medium which you cannot taste?

That is a brilliant question. I think there is something about watching a ritual. It’s equalising because everyone needs to eat: it performs that basic function of, oh, that’s something I could do. But I think people use food for escapism now. I think there’s something very comforting, I think in the brave new world which is so scary out there, it’s such a primal basic form of comfort. I think, also, despite the fact you can’t taste it, nearly everyone feels like they’re qualified to comment on it, and everyone loves to be a commentator.

That is true. I know I feel qualified to commentate on it, even though I have no idea. I couldn’t make anything that people make on MasterChef, but I still feel very comfortable critiquing them. Which is cruel, really.

Yes. So I think those things are why we still love to watch it.

OK, we’ll leave it there.

Ha! No … I feel conceited answering this question. I won’t answer the last bit because that’s not for me to judge. I do feel very loved. I feel always incredibly grateful for that. I think the reason for the longevity is related to – this is a word that’s getting bandied about so much that I’m embarrassed to use it, but – it is related to authenticity. I think you don’t have to be original, you just have to be real. That’s something I learnt a long time ago, and I think a lot of people think they have to go out of their way to be unique. The only thing that makes you unique is you. So, I am revealing more of myself all the time, as I get older, and I give less of a crap.

Is that daunting, to reveal more of yourself to the public – thousands and thousands of strangers, letting us all in?

No. I find it the opposite. But I think it is related to age. You know how people always describe older people as eccentric: I think it’s just that you’re getting closer to death and thinking, man, I better live it up. I better live my truth. It’s very invigorating because every time I take steps towards it, I’m always rewarded, and I feel like people respond to me with even more warmth. A lot of the time people find it really refreshing. It’s quite fun to shock people as well.

Hearing that, my mind immediately went to certain occasions on MasterChef, when you would change your mind halfway through a challenge, suddenly decide to bake a cake at the last minute … these things became part of the brand Poh.

Yeah, chaos reigns in my world.

So that’s really you, you’re not playing a part?

Oh no no no, you should see my house. At the moment I find myself doing so many weird things. I step back and literally think, it’s slowly turning into Grey Gardens in my house. I had to go overseas earlier in the year, and I know if I didn’t trim the wisteria they would be in trouble. So I was like, OK, I have to do this, I don’t have help doing this, I have to make this happen. I was trimming the wisteria in the middle of the night, by porch light. But it was the only time I had available because I was leaving the next day. So a lot of it is related to the fact that I try to cram a lot into my life. Because I’m not greedy for money, I’m greedy for experience. I want to suck every drop out of the lemon. So I invite the chaos, but I’m OK with it because I’ve lived like this for so long, it’s the only way I know how to live. And it’s also about throwing lots of balls in the air to see what takes. And that’s how a lot of really interesting opportunities have fallen in my path.

In terms of those opportunities, do you ever say no?

Yeah, I do, a lot. And I actually think that defines you more than what you say yes to. I say yes to everything that I already use or am into. Very simple, that’s my principle. If I don’t use that thing, I won’t say yes to it. For example, with Snackmasters, I sometimes cop a little bit of flak, they’re like, “Oh you’re a gross person, why are you promoting snacks?” I was like, “Because I love snacks!” I’m not saying that I’m having them for dinner – actually I do sometimes – but I eat really healthily 90 per cent of the time, but I love snacks. I’m not promoting them as a health food – it’s just what people choose to hang on to.

And why should anyone pretend not to love a Tim Tam?

Reward your time with these TV shows