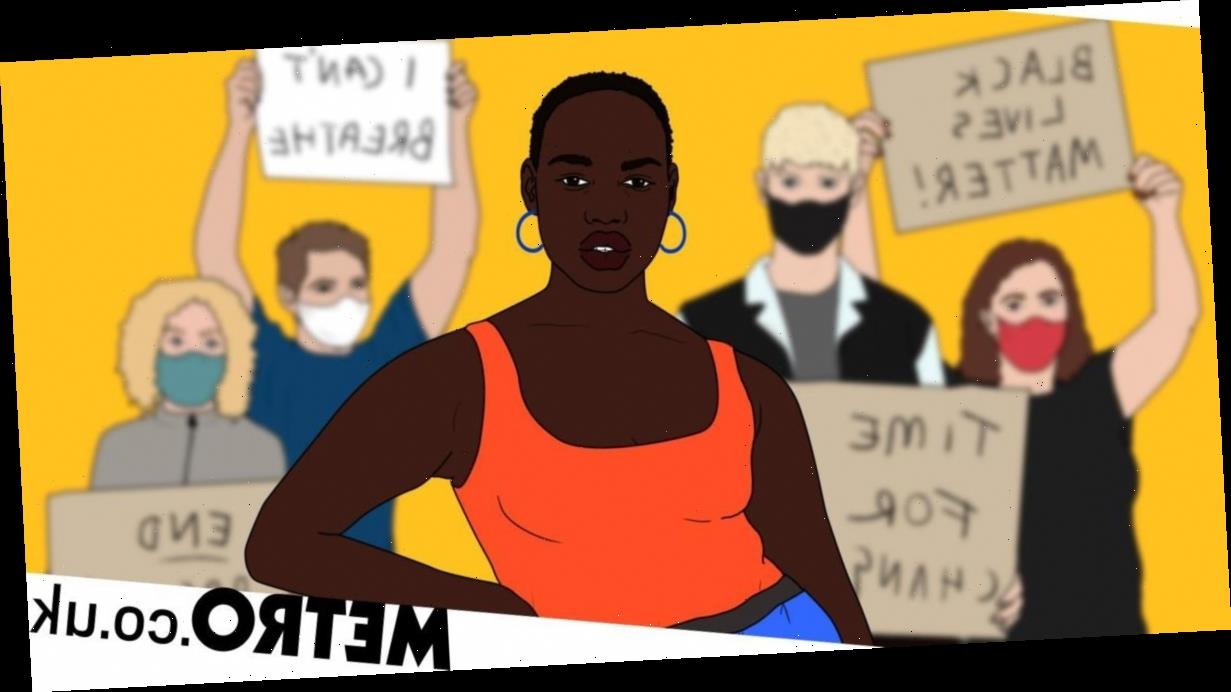 2020 has been a year of reckoning for race relations.

Global protests against police brutality and deep structural inequalities have forced an acknowledgment of racism on a scale that we have never seen.

Many people looked inwards, unpicking their own biases – unconscious or otherwise – and pledged to be better, to speak out against injustice, to no longer simply nod along or be silent in the face of racial inequality.

But there is a huge difference between not being racist and being actively anti-racist.

‘Not being racist really is the bare minimum,’ Nova Reid, an anti-racism activist, TED speaker and author, tells Metro.co.uk.

‘I find it troubling that, after the year we have had, people are still asking why they need to be anti-racist.

It is this active element that Nova says is so crucial in anti-racism. She says anti-racism is a decision to adopt certain practices and behaviours in your life that contribute to reducing inequality around you.

Simply not being racist is entirely passive, she says. Being not racist absolves you of personal guilt when it comes to racism, but it doesn’t help to solve the problem as a whole, or do anything to help those who experience racism.

‘Most humans fundamentally do not agree in the overt acts of violence and dehumanisation of another human being based on the colour of their skin,’ says Nova. ‘But racism exists beyond the reductive understanding of good or bad people. It goes beyond a conscious, overt act of hate.

‘Being actively anti-racist means recognising that being a good person doesn’t exempt you from racism. It means accepting you will have, unconsciously and consciously, learned racism and continue to discriminate and hold racist views about people because of the colour of their skin.

‘It means learning to centre the experiences of Black folk and non-Black people of colour in matters of racism, and not centre white feelings.

‘It means accepting that unless we start to acknowledge and take individual and collective responsibility to address racism, stop dismissing it as a thing of the past and work to change behaviour, nothing will change.’

Why is it important to be actively anti-racist?

When it comes to explaining the impact and significance of racism and inequality, so much of that burden still falls to people of colour.

Particularly this year, Black people and people from other ethnic minority groups, have had to watch white people wake up to the realities of racism in real-time. And with that came the questions.

How can I be better? What can I do? Have I ever done anything to offend you?

For people of colour, explaining racism and placating white friends and colleagues, has been a taxing and time-consuming responsibility this year. But active anti-racism is a way to take some of that weight off the shoulders of ethnic minorities.

Committing to anti-racism means taking responsibility for your own learning, and your own actions, without needing people of colour to hold your hand through that process.

‘Racism is more than offensive comments, it exists in the very fabric and institutions of our society: in the labour market, in accessing healthcare, in education, in housing and in the criminal justice system.’

Alba says anti-racism means recognising racism in society as systemic, and standing in solidarity with Black, Asian and minority ethnic communities in fighting it.

‘It is not enough to simply be “not racist”, and avoid making discriminatory remarks, it is incumbent on everyone to challenge the structures of racism in Britain,’ she adds.

‘We cannot be more aware of the dangers of racism, antisemitism and Islamophobia in our society.

‘In the UK, hate crime is on the rise, Black, Asian and Ethnic Minority communities are disproportionately dying from Covid-19 and Black people are nine times more likely to be stopped and searched than white people.

‘Movements across the globe are demanding an end to racial injustice. Now more than ever, it is clear that simply being “not racist” is not enough. What is needed instead is for people to confront the realities of structural racism in society, acknowledging how they contribute to it, and to work in solidarity with others to challenge it.’

It won’t always be easy or comfortable to acknowledge the existence of structural racism, or your privilege within the existing systems, but that is the first step in active anti-racism.

The next step is educating yourself in a way that doesn’t burden the people of colour in your life, adjusting your behaviour where necessary, and being supportive with your voice and your actions wherever you can.

How to be anti-racist

‘There are so many anti-racism guides and resources on the internet, start there.

‘Read anti-racism books, and if reading isn’t your thing – go to podcasts, listen to them while doing chores. Commit to checking out documentaries about race.  Learn something new about Black history, beyond enslavement, in online courses.

‘Be intentional with the toys or books you buy for your children, are they representative of the world we live in? Do they have leading black characters or stories that aren’t just centred around struggle, for example?’

Nova says it is important to ask yourself a series of questions, and be unflinching when you answer them.

For example; what are you actively doing to unlearn the negative stereotypes you may hold about Black people and people of colour? Or, what are you going to do the next time casual racism pops up in a WhatsApp group or at a family gathering?

‘Let go of shame and instead, have the courage to interrogate your “isms”,’ she says. ‘If you’re human, you have them, and you can’t address what you deny is there.

‘Check out the implicit bias test by Harvard. Listen to people who experience racism. Believe them instead of defending your position. Their experience of racism is not an attack on your identity.’

Alba from Runnymede Trust reiterates that the responsibility to challenge and eradicate racism should not fall on the shoulders of Black, Asian, and ethnic minority people alone.

‘Take time to learn about the structures of racism in society, about the contributions that immigrant communities have made for centuries, and about how Britain’s history of empire has shaped society today,’ she suggests.

‘Use that knowledge to make conscious efforts to challenge racism and discrimination on a systemic level.

‘Confront prejudice; challenge racial discrimination and the ethnicity pay gap at work; support race equality organisations and those working with migrants and refugees.’

Anti-racism is about about using your privilege as a force for good. It is about elevating marginalised voices and bolstering them whenever you can.

Becoming anti-racist is a long-term commitment that can’t be ticked off your list by simply working through a reading list or downloading a couple of podcasts. So, be patient with the process and give yourself the time to properly adopt the principles.

The State of Racism

This series is an in-depth look at racism in the UK in 2020 and beyond.

We aim to look at how, where and why individual and structural racism impacts people of colour from all walks of life.

It’s vital that we improve the language we have to talk about racism and continue the difficult conversations about inequality – even if they make you uncomfortable.

We want to hear from you – if you have a personal story or experience of racism that you would like to share get in touch: metrolifestyleteam@metro.co.uk

Do you have a story to share? We want to hear from you.

MORE : Creatives of colour have to make art that’s ‘palatable to white audiences’

MORE : Benjamin Zephaniah: ‘The racist thugs of my youth are grown up and wear suits now’