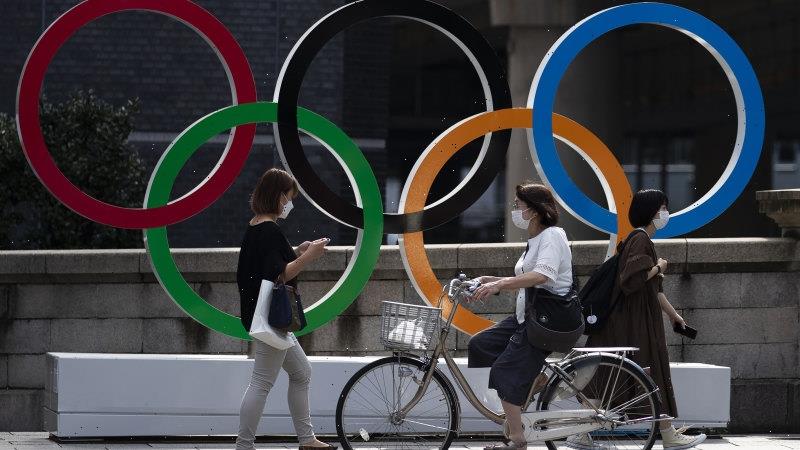 Why should we care about these Olympic Games, when they start in a few days’ time? The response is, even more than usual, complicated.

There are steep barriers between the Australian sports fan and this Olympiad, and not just because it falls inconveniently in the middle of the footy season. (The Sydney Games, by contrast, were such a global success because the AFL and NRL grand finals were run and won so the whole world didn’t have to obsess about Broncos v Roosters or Essendon v Melbourne.)

Primary among those barriers is a widespread and deep-seated public unease with the International Olympic Committee and its bull-headed pursuit of the games at any cost, provided such cost is paid by the people of Japan.

Having trousered its broadcast money in advance, the IOC was only ever going to uphold its end of the deal. There was never any real risk of the content not being produced, or, put another way, the games not being played.

Amid a global pandemic and the strong opposition of all measurable segments of the Japanese population, the IOC’s determination appeared as if the organisation operated outside normal rules, whether written legislation or the laws of biology.

For many, to shun the Olympics is a protest vote against the IOC and its way of doing business over the past several decades.

Put one way, the IOC is a ruthless organisation that uses athletes as a human shield.

I would not put up any kind of defence of the IOC, except to say that to boycott the event is also to boycott the thousands of competitors, mostly young men and women who will only get one chance in their lifetime to participate in what is still, COVID or no COVID, the world’s greatest sporting event.

This is the sympathy card the IOC can and does play. While the organisation has a long rap sheet of cynical, arrogant and formerly illegal activity, the Games remain a carnival of human potential, a spectacle for excellence and the emotions that flow from triumph and defeat. What, you’re going to turn your back on all those swimmers, weightlifters, runners, gymnasts, rowers, cyclists, footballers, surfers, canoeists, um….skateboarders, rock climbers… because you disagree with the way the Olympic organisation does things?

Put one way, the IOC is a ruthless organisation that uses those athletes as a human shield. Put another, the IOC has to carry out the sometimes unpleasant behind-the-scenes work that guarantees those athletes their big moment.

This is what the Olympiad does: it hits the outrage button while pulling on the heart strings. If you’re contemplating a personal TV boycott, you might talk to someone who ran away from Sydney in 2000, when the IOC was more lawless then than it is now, and ask them if they regret it. 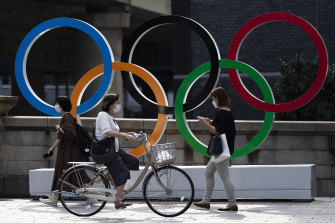 The Japanese population has been fiercely opposed to the Tokyo Games going ahead.Credit:AP

But there is the footy season to focus on, right? This raises a broader – or narrower – point. We in Little Australia are living in times when our focus is ever more inward. Sport has been leading this retreat to the domestic. The success of our local football codes in recruiting young talent and dominating the media landscape is reassuring for many.

Watch Tom Trbojevic or Latrell Mitchell or Dustin Martin or Lance Franklin, and you can be forgiven for believing Australia produces the strongest, fastest and highest-leaping athletes on the globe. Our professional sporting landscape mirrors, more and more, that of the United States, where the domestic competitions hog the resources and the limelight and kid the population into believing they are the best, being preoccupied with sports that do not measure themselves against the rest.

One explanation for why the Wallabies and the Australian cricket team are so uninspiring to watch and their talent pool so shallow is that the majority of the best young male athletes were scooped up by the AFL and NRL when they were teenagers. Watch the Wallabies back line and it’s hard not to conclude that you are seeing the kids that the NRL and AFL scouts left on the shelf. Sporting priorities favour the domestic ‘industries’ over the more risky international ventures. We are more content playing with ourselves. Sound familiar? 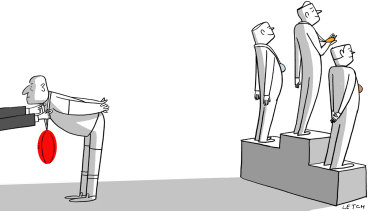 The Olympics, then, have a symbolic value as a pathway back to the world, a reminder of perspective. And perhaps a slap in our inward-looking faces.

The team Australia is sending to Tokyo is second in size, for an overseas Olympics, only to the team sent to Greece in 2004. Athens was, going by the tally of medals, Australia’s best ever Olympics, with 17 coloured gold and 50 in total.

Wisely, the chef de mission of the current team, Ian Chesterman, has refrained from posting a medal ‘target’, but rest assured, the tallies will be on constant display.

Whether these numbers bring pain or pleasure to the national morale, they will remind us that we are not floating away in the Pacific in our less than splendid isolation. 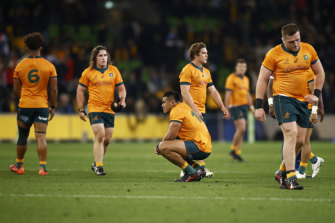 One would be hard pressed to suggest that in 2021 the Wallabies have their share of Australia’s strongest, fastest and highest-leaping.Credit:Getty

Australia’s national morale does not, arguably, depend on sporting performance as it did two decades ago. Thinking back to Sydney 2000 or Athens 2004, those Olympic high-water marks when Australia ranked in the world’s top four, it is striking to remember how needy the sporting public still was for international validation. We might not have much European history or culture, but crikey, when it came to sport, the world took notice of Australia.

If anything, the pendulum has swung so far the other way that we now get that boost to self-worth if our suburb beats its neighbour in the weekend football derby. Our international self-esteem rests more now on things like our success in handling the pandemic (last year, grand final; this year, no chance of making the eight).

So what is the meaning of these Games? Will they remind Australians of the interlocking world we still live in, or will we bury our heads in the sand of our footy tipping comp? An internationalist would hope for the former, but the gravitational force of the local, the four walls of home, are exerting their irresistible pull. Indifference to the Olympics, as an expression of Little Australia, will also be at record highs.

The optimistic view is that every Olympic medal will draw us a bit closer into the outside world.

Either way, whether our athletes bring home gold, silver, bronze or nothing, the more we look inwards and look after number one, the more the human race will leave us behind.

Sports news, results and expert commentary. Sign up for our Sport newsletter.