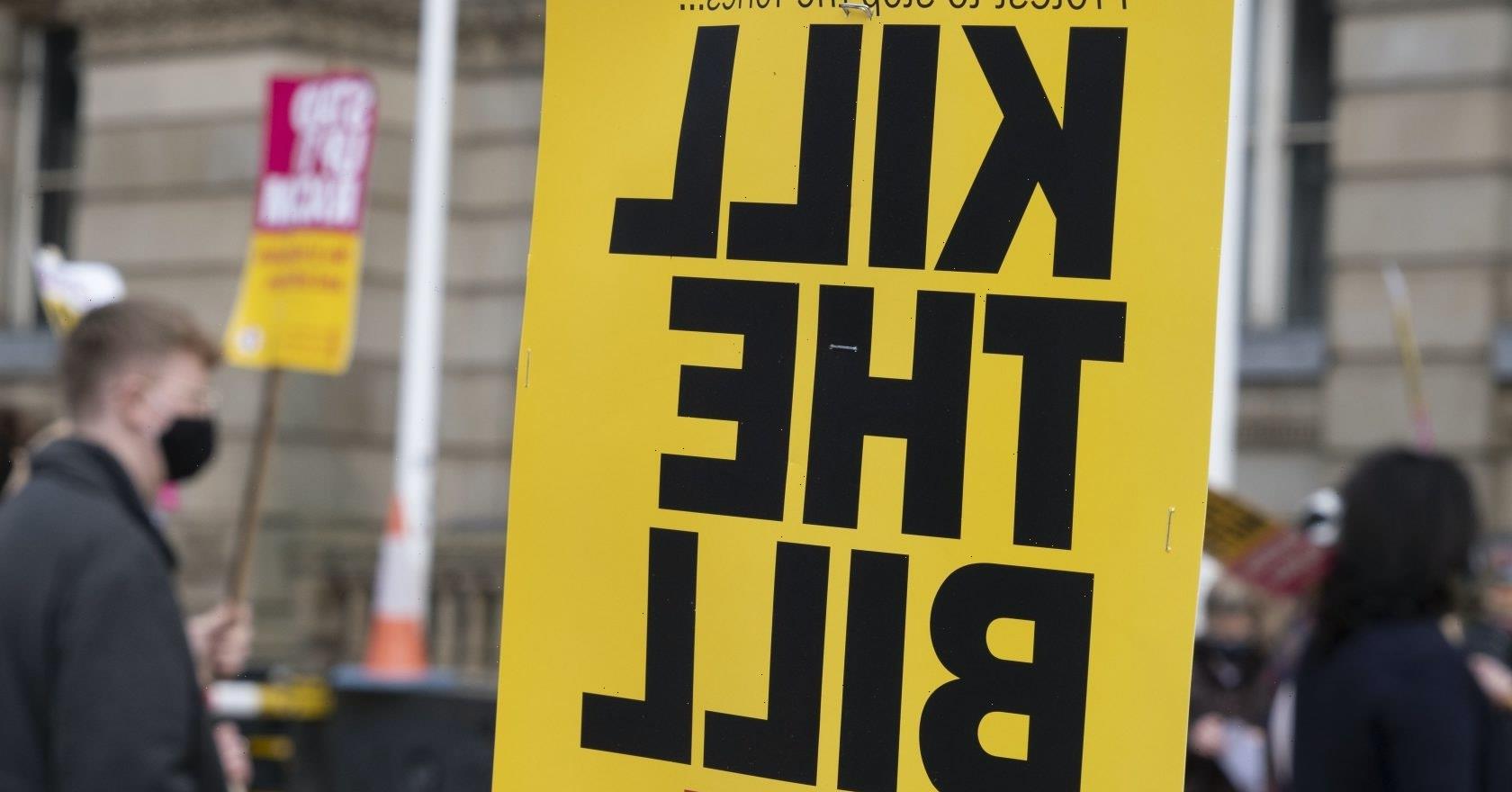 Heard about calls to #KillTheBill but not quite sure what it all means for you? Now that the controversial Police, Crime, Sentencing and Courts Bill passed its third reading in the House of Commons, here’s what you need to know about it.

On 5 July, the controversial Police, Crime, Sentencing and Courts Bill passed its third reading in the House of Commons with 365 votes to 265, with all but three members of the Conservative Party voting for it.

The bill, which proposes new police powers when it comes to protests, was approved by MPs in spite of mounting warnings over human rights and questions over whether police want or need the powers.

The wide-ranging authoritarian legislation also cracks down on trespassing, which puts Gypsy, Roma and Traveller groups at risk and threatens to push rough sleepers deeper into homelessness.

The bill originally passed its second reading in March, and its passage through the House of Commons was delayed due to the backlash it received.

Protesters calling to “Kill the Bill” have taken to the streets and filled social media feeds for months now. But what does it really mean for us?

What does the Policing Bill mean for us?

The bill “should concern us all” says the Good Law Project, a not-for-profit campaign group, citing the treatment of attendees of the Sarah Everard vigil where police have now been found to have breached ‘fundamental rights’.

Along with exacerbating the discriminatory over-policing of people of colour, subjecting people to profiling and state harassment, many accuse the bill of giving more rights to ‘statues than human beings’. The bill would give the police the ability to impose “conditions” on any protest which is deemed to be disruptive to the local community and up to 10 years in prison for damaging memorials.

Gracie Bradley, interim director of Liberty HQ, the UK’s largest civil liberties organisation, said in a statement: “Protest isn’t a gift from the state – it’s our fundamental right and under human rights law, states have an obligation to facilitate protest not suppress it,” says Bradley. “Yet this is what this bill seeks to achieve. Not content with all but banning protest during the pandemic, the government is now using this public health crisis as cover to make emergency measures permanent. Its new policing bill is an all-out assault on basic civil liberties.”

The bill has been widely protested.

Who opposed the bill?

Opposition MPs and public figures including Gina Martin are made calls to #KillTheBill.

“When your empty words are not enough, when the protests grow too loud — you respond by making the protests illegal. #RightToProtest and #PoliceCrackdownBill,” tweeted climate activist Greta Thunberg.

Labour MP Diane Abbott called the bill “an attack on everyone’s right to protest” that “targets campaigners, unions, marginalised communities and all those who might oppose this government.”

“No matter where we come from or what we believe, we all want to know we can speak out against injustice, to live life freely, as we choose, without fear of oppressive state surveillance and discrimination. Those in power want to take this away from all of us,” added Bradley and Liberty HQ in a statement.

Upskirting campaigner Gina Martin called for her followers to “recognise the danger and act.”

Political journalist Moya Lothian-Mclean expressed her shock at the news.

Labour MP Bell Ribeiro-Addy defended the right to protest in the House of Commons.

Black Lives Matter UK have also publicly opposed the bill, calling it “a plan to further persecute and imprison Black and other marginalised communities.”

“The Serious Violence Public Duty – which would allow police to turn schools and the NHS into racist profiling regimes. Just as the Prevent programme has framed Muslim communities as suspects in the minds of many public sector workers, the bill plans similar measures that will target working class African and Caribbean communities,” they told Stylist in a statement.

They believe there is no evidence that any of these measures reduce harm or violence. “Why should police officers now be exempt from road traffic prosecutions when we’ve seen a rise of police cars dangerously colliding with teenagers on mopeds? Why is the government criminalising one-person protests? For every social problem, the government has one answer: more police. That answer doesn’t solve any problems for Black communities or Gypsy, Roma and Traveller communities, who bear the brunt of institutionally racist and corrupt police forces,” they continued.

Black Lives Matter UK encouraged people to “come together to defend communities that are under attack.”

When will the bill come into effect?

The 5 July vote marks the end of the bill’s passage through the House of Commons. It will now go on to repeat the process (First Reading, Second Reading, Vote, Committee Stage, Report Stage, Third Reading, Vote) in the House of Lords before being passed back to the Commons with any of their amendments.

The Bill has not yet been scheduled within the House of Lords and it is not expected to be passed before the summer recess on 22 July.

The Bill will give police the ability to impose “conditions” on any protest which is deemed to be disruptive to the local community.

What can be done to oppose the Bill?

“We are determined to make these plans unenforceable in our communities,” say Black Lives Matter UK. Protests against the bill are continuing to be organised by lobbyist groups before the Bill gets to the House of Lords.

“It’s a primary duty of Government to ensure that our communities are safe and free. But parts of this Bill will facilitate discrimination and undermine protest, which is the lifeblood of a healthy democracy,” says Bradley.

“We should all be able to stand up for what we believe in, yet these proposals would give the police yet more powers to clamp down on protest. They risk stifling dissent and making it harder for us to hold the powerful to account”.

“We must reject the politics of division that the Government is proposing through this Bill, and protect each other and our ability to stand up to power.”