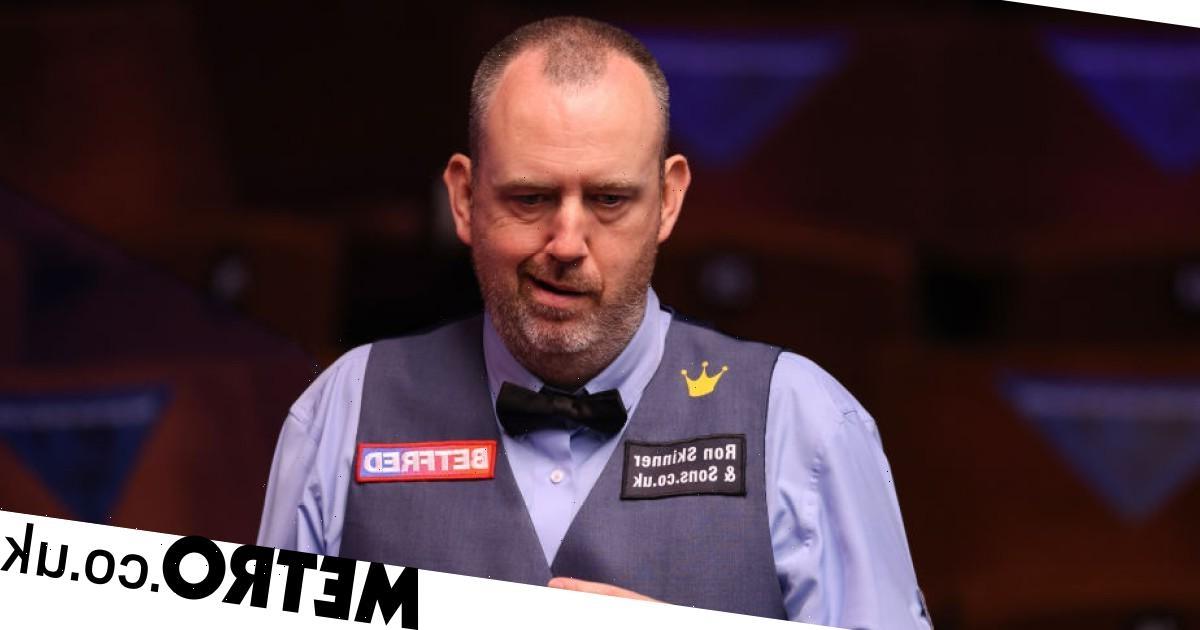 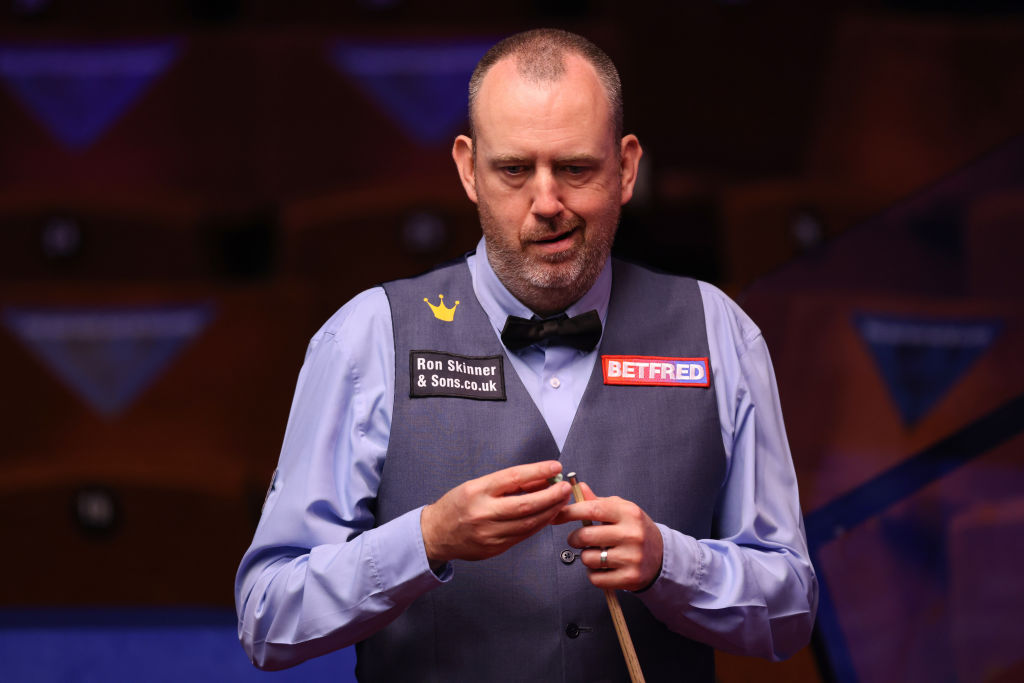 Famously relaxed about winning or losing snooker matches, Mark Williams can only think of two defeats in his entire career that have wound him up, although there are other things in the game that grind the Welshman’s gears.

At 46-years-old the three-time world champion is still competing at the top of the sport, winning the British Open this season and taking his ranking title tally to 24 in the process.

He’s back in action next week at the Champion of Champions as he looks to add that title to his collection, but he will be trying to see-off both Covid and gout when he does so.

Missing the English Open and European Masters due to a positive test, Williams has been struggling with the virus, and although he’s on the mend, his old foe gout is threatening to strike again.

‘I’m a bit better now,’ Williams told Metro.co.uk of his Covid struggles. ‘Taste is coming back slowly. I was in bed for five or six days shivering.

‘Hopefully I’ll be alright by Tuesday [when he takes on Neil Robertson], fingers crossed. If it was last week I’d have had it.

‘I think the gout is coming back! I’m taking these tablets again. Normally you get it, can’t walk and take these tablets for two or three days and it’s gone then. I’ve just felt my ankle going again so I’ve started taking the tablets just in case.

‘They say to try to eat healthier, but I went vegetarian for two or three weeks before I got it, so that’s weird. I’m back on the meat now. They said don’t drink too much alcohol but I don’t really drink that much now. I don’t want it again because it kills.’

Illness and injury have struck at an irritating time for the Welsh Potting Machine after some impressive early-season form, having also been in good nick at the back end of the last campaign as he won the WST Pro Series and made the Crucible quarter-finals.

‘I won one [title] last year, one this year, I’m playing really good as well,’ he said. ‘I’ve been unlucky to get gout and Covid at the time when I’m playing some really good stuff.

‘Even with gout I was one ball away from beating John Higgins 4-0 [at the Northern Ireland Open], which I should have won to go into the quarters and then who knows?

‘I’ve missed two tournaments because of Covid when I had some good momentum and now I’ve got to start from scratch and get that momentum back. It’s a weird one.’

Williams always says that losing doesn’t bother him in the slightest and even being 3-0 up on his old rival Higgins in Belfast before losing 4-3 didn’t fluster him.

‘I don’t know why people don’t believe me, it doesn’t bother me in the slightest. The commentators going, “Oh that’ll hurt for a while.” Hurt what? How can you hurt? You’ve just lost a snooker game, man, for goodness’ sake.’

Having turned professional in 1992 it seems unconceivable that Williams can have literally never been annoyed by a defeat and when pushed he could recall one or two examples of being ‘cheesed off’.

‘The only one that sticks in my mind, I lost to Ali Carter in the UK, I think it was in Telford [2008 quarter-final]. It was 8-8, I was in the balls and I had the biggest kick on a red to win 9-8 and missed it,’ Williams explained.

‘That was the only match that I can remember driving home and I don’t think I spoke to my mate Matthew all the way home. I drove home at ridiculous speeds.

‘The next morning I was still pissed off. That’s the only match I can really remember in 30 years that I’ve been cheesed off.

‘Maybe there were one or two more, but I can’t remember them. Wait, one has come to me, playing Paul Davison, 4-4, to qualify for one event last season [German Masters].

‘He fouled the yellow, I was sat behind him and it was blatant. I told the ref he’d hit the yellow there. She said, “how do you know?” Well I was sat right behind it. I asked if they could check and they said no. I was a bit cheesed off on that one, but just because of the way it happened.

‘He come up to me probably weeks after and apologised, said it was a foul but he didn’t see it at the time because he was swerving, something like that. It’s long gone by then. If he’d have said straight afterwards I’d have, you know, said something. Losing makes no difference to me, but it was blatant.

‘I couldn’t argue much because if the referee hadn’t seen it, they hadn’t seen it. That was a rare occasion though, it’s not many games over a 30-year career to get upset about.’

Asked if this is the experience of a grizzled veteran coming into play or just his natural persona, Williams said: ‘I’ve always had that attitude.

‘There’s no one that will try any harder than me when I’m playing. But as soon as it’s over I’ll shake hands and that’s it.’

It’s difficult to bother Mark on the snooker table, but he would like to see changes off the baize, suggesting a cut to the number of professional players on tour and ideally some prize money for first round losers.

With amateur top-up players competing in every event and first rounds losers walking away with nothing but bills, Williams would prefer a smaller, more sustainable pro tour.

‘Don’t get me started on the top-ups,’ he said. ‘If you lose in the last round of Q School you’ve got the best of both worlds. Every pro event, every amateur, if you’re over 40 all of the Seniors as well. How is that fair?

‘I think it would be better, if you need top-ups, go off the Q School list but they only get one event. You can’t have people coming in as top-ups at every event, knocking professionals out who are trying to earn a living. In my opinion they shouldn’t be in it if they don’t get through Q School. They can have one event. It might just be me but I don’t think that’s fair.

‘There must be well over half the tour who are skint. You’ve got to get to the latter stages to earn good money and there’s not many players that do that. It’s normally the same ones every time, so it’s very difficult to earn a living.

‘You never get 128 players at an event anyway, so I’d cut the tour because it’s too big, not sure to what number. Once you get on the tour hopefully everyone would be able to earn a living, including paying the first round losers.

‘The incentive is to get on tour and once you’re on the world professional tour you should be guaranteed a living. You don’t have to worry about losing. It’ll be harder to get on but it could be possible for everyone to be on a living then.’

Even with the full 128 players the current tour holds, Williams can’t see why a slight restructure couldn’t be made to offer prize money in the first round.

‘I don’t see how it’s a reward to someone just helping them pay the bills. But I do think the tour is too big, when was the last time we didn’t have top-ups in an event?’

One thing Williams has changed himself in recent years is the way he breaks-off in frames, choosing to roll into the pack of reds off the top cushion rather than the traditional break.

There were calls to ban the defensive shot at first, and even an email to players asking if it should be allowed, before a number of those players saw the benefit of it and copied the move, which entertained the Welshman.

‘I was [laughing] because I thought it was pathetic we had an email about banning it,’ said Mark. ‘I ain’t done nothing wrong.

‘Then John Higgins done it, Ronnie O’Sullivan done it, 10 or more of them were doing it. You’ll soon get sick of leaving a long red!

ð²ð¥ Ronnie O’Sullivan attempted the ‘Mark Williams’ break badly during his defeat to Anthony McGill, while the inventor didn’t have much luck against John Higgins…who then tried it himself! pic.twitter.com/7H1d38JXKT

‘I don’t do it as much now, but if the table’s playing so you can’t get behind the green, I go back to rolling into the bunch. It’s just a break-off, you know, pfft. Ban the break-off!

‘Who was it? I broke off like that and he had the hump, you could tell on his face. I can’t remember who it was but I beat him 4-0. If it annoys people it makes you want to do it more. The more people talked about banning it the more I was doing it.

‘You can’t tell Ronnie not to smash the pack. They were trying to ban my break off, I haven’t had an email off World Snooker yet about smashing the pack. They must be happy with that one.’

Williams is certainly open to change in the game, backing Judd Trump’s calls to modernise the dress code and look at the possibility of staging the World Championship somewhere other than the Crucible.

‘I always thought one day they’d move from there, that it would outgrow the Crucible,’ said Mark.

‘I can see why people think it’s good with the tradition, which it is. But I just think it’s that big a tournament it could generate more money if you spread it around, like the [FIFA] World Cup.

‘Even if it did go from there, the Crucible would have to have a tournament because when it gets down to one table it’s one of the best venues you can play in.’

On snooker’s dress code, the veteran is happy for change to come to try and attract a younger generation, although admits that players should not be left up to their own devices.

‘I read what Judd said and I think he’s pretty much spot on,’ said Williams. ‘Look, I’m coming to the end of my career, whether you play in t-shirts, Dickie Bows or a pair of shorts, it doesn’t really make any difference to me, I couldn’t care less. But what he’s saying to get younger people involved, he’s got a fair point.

‘The younger players, they don’t want to see Judd Trump wearing a Dickie Bow, they’d rather see him wear his own clothes or whatever. It gives you your own identity I suppose. We’ve got to attract youngsters very quick because what I’m seeing, the amateur game, it’s not in a great state at the moment.

‘We get a few kids in [at my club] but nothing compared to when I used to go in when I was a kid. The Welsh junior tournaments, oh my God, you’d have loads of entries, now I’m hearing it’s five and six entries for junior tournaments. That’s worrying. But it’s hard to get people in snooker clubs now, playing X-boxes and outside playing football, it’s difficult.

‘I don’t think the Shoot Out t-shirts look bad, I think they look quite smart. I suppose it’s dodgy telling people they can wear their own clothes, I’m not the smartest I’d probably turn up in a pair of tracksuits.’