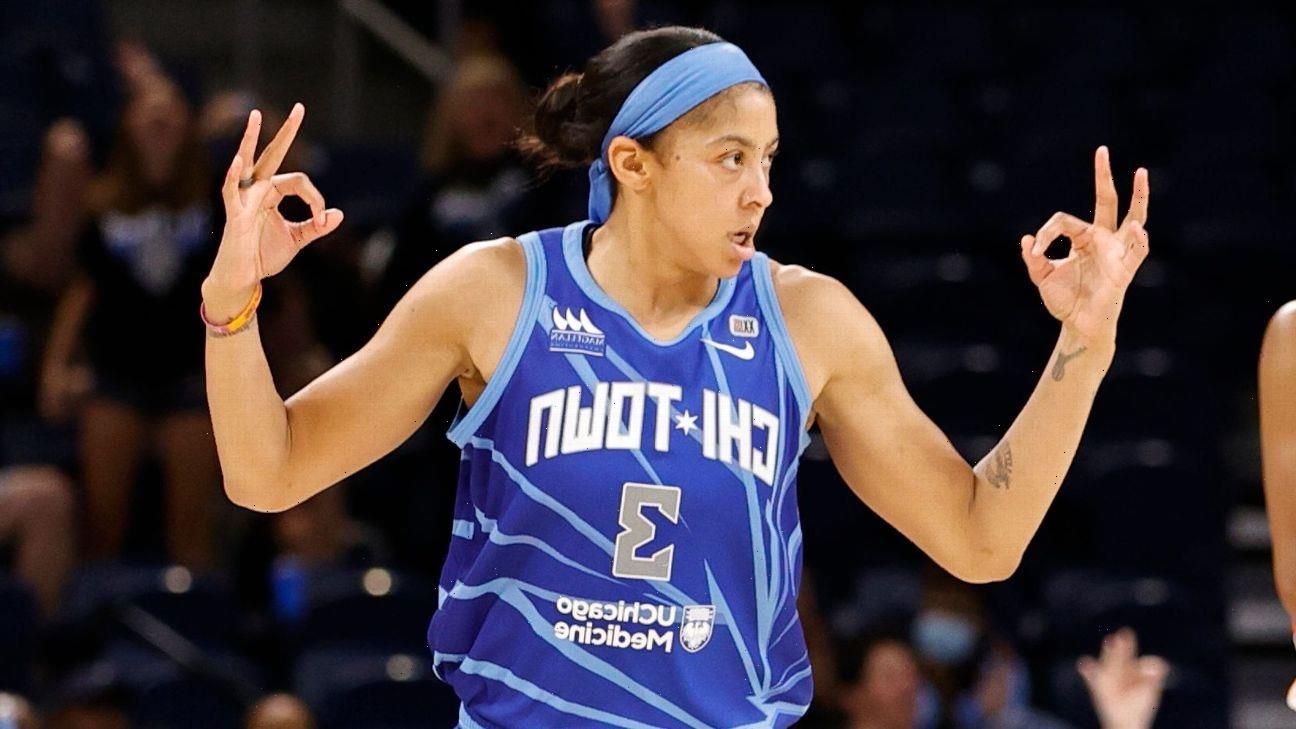 Mechelle Voepel covers the WNBA, women’s college basketball, and other college sports for espnW. Voepel began covering women’s basketball in 1984, and has been with ESPN since 1996.

LAS VEGAS — All-Star contests are typically a chance for athletes to show up and show off. But Wednesday’s WNBA All-Star Game (7 p.m. ET, ESPN/ESPN App) won’t just be for show. It pits Team WNBA vs. Team USA, which is preparing for the Tokyo Olympics.

“This game is gonna be more than just the regular All-Star Game, having fun and all that,” said center Brittney Griner, who joins Phoenix Mercury teammates Skylar Diggins-Smith and Diana Taurasi on Team USA. “I like All-Star Games being like that, but this year it’s not going to be. We’re out there with a mission. We’re going to use this game to get ready. It will be a really good game for people to tune into, that’s for sure.”

The 12 members of the Olympic team, announced by USA Basketball on June 21, automatically became All-Stars. Team WNBA’s 12 members were selected by the league’s coaches from a pool voted on by fans, media and the players.

There are six first-time Olympians and eight players overall who will be competing in their first All-Star Game. Here are five things to watch for when the WNBA’s best take the floor at Michelob Ultra Arena at Mandalay Bay in Las Vegas.

Expect the game to be more competitive

As Griner said, even though an All-Star Game is normally a friendly exhibition where many players barely pretend to play defense, Team USA has to value every moment on the court with the Olympics so close. After the All-Star Game, the U.S. team will have exhibitions in Las Vegas against Australia on Friday and Nigeria on Sunday. The Americans open Olympic group play in Tokyo on July 27 against Nigeria.

The Connecticut Sun’s DeWanna Bonner, who will appear in her fourth All-Star Game, said even though she isn’t on Team USA, she wants to do her part for the Olympic squad.

“We want to go out and perform and help them get better,” Bonner said of Team WNBA’s motivation. “Of course, we’re rooting them on [in Tokyo]. When we get around each other in Vegas, we’ll see what the energy’s like and how things feel.

“But I’m also there to have some fun; it’s a reward for all your hard work.”

Her Sun teammate Brionna Jones is a contender for the WNBA’s Most Improved Player this season and will be competing in her first All-Star Game.

“Playing the USA team, there’s definitely going to be a little bit more of an edge to this game,” Jones said. “I’m just excited to get out there.”

It will be the fifth All-Star Game for Diggins-Smith, who will be making her Olympic debut. Right up until the end of Phoenix’s last game Sunday before the break, Diggins-Smith said she was trying to focus solely on the Mercury. Now that focus shifts for the next few weeks.

“I have had to compartmentalize,” she said. “I know all the emotions and everything will come to me.”

We could see some future Olympians on Team WNBA

In preparation for the 2016 Olympics, Team USA played an exhibition against a USA select team, which was comprised of young WNBA players in the USA Basketball pool who hoped to be future Olympians. It’s a similar concept for this All-Star Game, except Team USA’s opponents this time are voted-in All-Stars, some of whom already have Olympic experience, and some who aspire to get that in 2024.

That July 25, 2016, game in Los Angeles didn’t feel like an exhibition: The select team players wanted to show their worth, and Team USA got a narrow 88-84 victory. It was the kind of test that the Olympic team appreciated to get ready for the Rio de Janeiro Games, where the U.S. women’s national team won the program’s sixth consecutive gold medal.

Three players on that 2016 select team will be Olympians this year: the Seattle Storm’s Jewell Loyd will play for Team USA and the Atlanta Dream’s Elizabeth Williams for Team Nigeria in the 5-on-5 competition, and the Chicago Sky’s Stefanie Dolson will be on the USA’s 3-on-3 team.

The Dallas Wings’ Arike Ogunbowale is the player on Team WNBA for this All-Star Game who seems most likely to be a first-time Olympian in 2024. The third-year guard is averaging 20.1 points for her career.

There may be a little more pride on the line for some members of Team WNBA because they aren’t on Team USA.

As hard as it is to make a WNBA roster with just 12 teams in the league, it’s even harder to make the U.S. Olympic team because the talent pool is extremely deep. Every Olympic cycle, there are multiple deserving players left off Team USA.

Candace Parker, who will be playing for Team WNBA in her sixth All-Star Game, was a controversial omission in 2016 after winning gold in the 2008 and 2012 Olympics, and that ended her USA Basketball career. Her current Sky teammate Courtney Vandersloot, an All-Star for the third time, also didn’t make the 2016 team, as she couldn’t break through the veteran presence at point guard then with Sue Bird, Diana Taurasi and Lindsay Whalen.

Vandersloot was 27 then and figured she might not get another chance with Team USA, so she opted to play for the national team of Hungary, as she has citizenship there. But Hungary didn’t qualify for these Olympics.

Considering Whalen is retired now and Vandersloot is leading the WNBA in assists for the fourth consecutive season, might she in fact have made the U.S. squad for Tokyo? Perhaps, but many thought Los Angeles Sparks forward Nneka Ogwumike would make it after her lengthy USA Basketball career, and she didn’t. So it’s hard to say what might have happened for Vandersloot, especially since Team USA this time added guards Loyd, Chelsea Gray of the Las Vegas Aces and Ariel Atkins of the Washington Mystics, all of whom are younger than Vandersloot.

At any rate, Parker and Vandersloot might get a little extra satisfaction in performing well against Team USA.

We don’t want to shortchange the guards in this All-Star Game, but what a battle of bigs.

Three of the best centers in WNBA history are on Team USA: the Minnesota Lynx’s Sylvia Fowles, Washington’s Tina Charles and Griner. At forward are Las Vegas’ A’ja Wilson, Seattle’s Breanna Stewart and Minnesota’s Napheesa Collier. Four of them — Charles, Fowles, Stewart and Wilson — are past league MVPs. Fowles and Stewart both have won two WNBA championships, and Griner one.

Charles didn’t play in the WNBA’s bubble last season, and Fowles was limited to just eight games (including the playoffs) by a calf injury. This summer, Charles is having the best season of her career and is a strong MVP candidate, averaging 26.3 points — the league record for a season is 25.3 by Taurasi in 2006 — and 10.0 rebounds. Fowles is averaging 15.9 points and 9.8 rebounds and is in the running to win her fourth WNBA Defensive Player of the Year award.

Griner, who left the bubble early last season for personal reasons, is having a stellar season, too, averaging 20.5 points and a career-high 9.7 rebounds.

Wilson and Stewart were the top players in the bubble last year, and their teams met for the championship. Wilson was the season MVP and Stewart the WNBA Finals MVP, with the Storm winning the 2020 title. They’re MVP candidates again, and Seattle leads the WNBA at the break with a 16-5 record; Las Vegas is second at 15-6.

And Collier? She’s one of three 24-year-olds on the Olympic team, along with Wilson and Atkins, and is averaging a career-best 17.3 points.

Forwards Bonner and Las Vegas’ Dearica Hamby are sometimes underestimated, but both are high-impact players, too.

And there will be two great posts on Team WNBA’s bench, too, as Olympic and WNBA champions Lisa Leslie and Tina Thompson will be co-head coaches. Former Olympic/WNBA guard Dawn Staley coaches Team USA. All three are Naismith Hall of Famers.

Editor’s note: Diana Taurasi said Tuesday that her hip injury will likely sideline her for the 2021 WNBA All-Star Game.

Some women’s basketball fans have said they’re weary of seeing this duo going to the Olympics again, the fifth trip for both. But even if you share that mindset, try to put it aside and marvel at how utterly amazing Bird’s and Taurasi’s stories have been. Aside from their USA Basketball success, they were NCAA title teammates at UConn, No. 1 draft picks who’ve stayed with the same WNBA franchises their entire careers and won multiple championships, and they’ve both played at a high level late into their 30s (and now 40s for Bird).

Taurasi has been battling injuries this season and has been limited to seven games, so it’s unclear how much we’ll see her play this week in Las Vegas. But on June 27, she became the first WNBA player to score 9,000 career points. Bird hasn’t missed a game in 2021, is averaging 10.9 PPG and keeps adding to her WNBA record assist total, now at 3,003.

They’re two of the all-time legends in American sports history. Relish the fact that we’ve seen them excel for more than 20 years and still have the chance to keep watching them. Don’t be a Grinch to this much greatness.