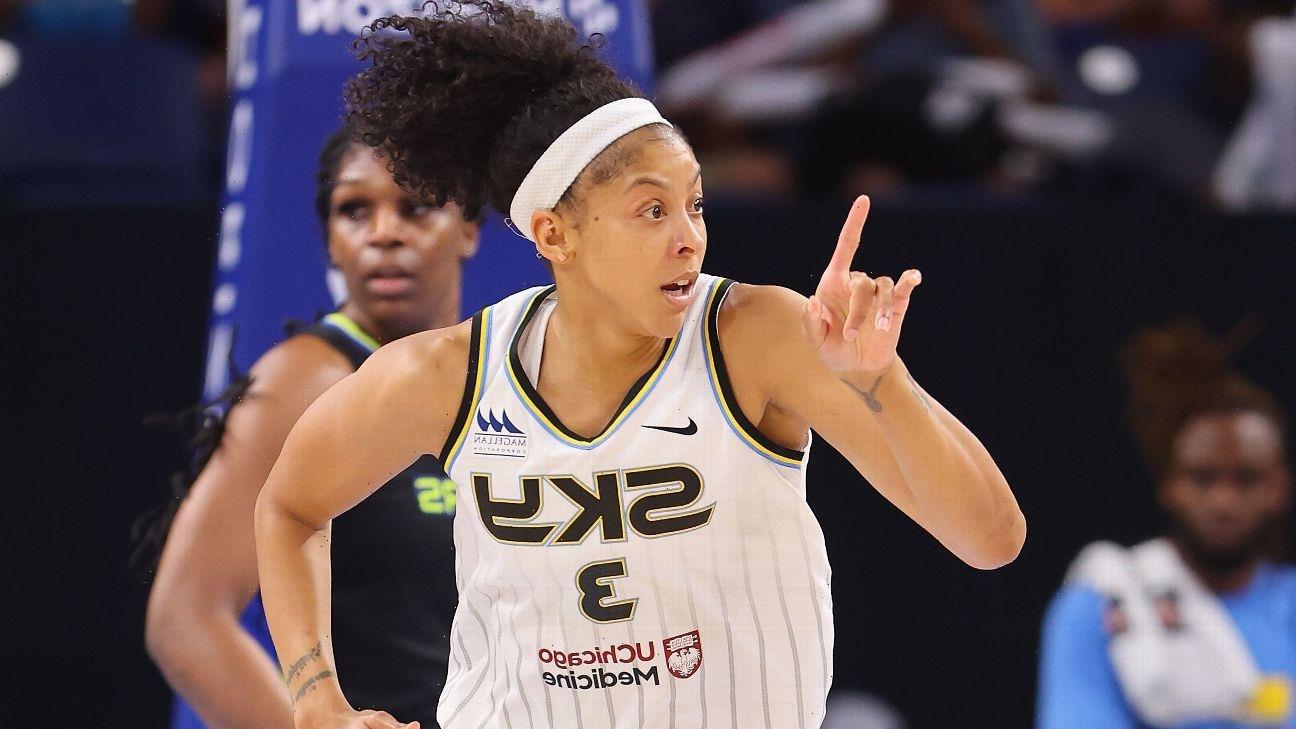 After a thrilling regular season and down-to-the-wire fight for the final two postseason berths, the 2022 WNBA playoffs tip off Wednesday when the No. 7 seed New York Liberty visit the No. 2 seed and defending champion Chicago Sky (8 p.m. ET, ESPN2) and the No. 8 seed Phoenix Mercury take on the No. 1 Las Vegas Aces (10 p.m. ET, ESPN). The first round continues Thursday with the No. 6 seed Dallas Wings facing off against the No. 3 Connecticut Sun (8 p.m. ET, ESPNU/NBA TV) and the No. 4 Seattle Storm hosting the No. 5 Washington Mystics (10 p.m. ET, ESPN2).

This season’s playoffs feature a new format, removing single-elimination games and byes for top teams in favor of best-of-three first-round series and best-of-five battles for the semifinals and WNBA Finals.

Even as the Aces established themselves as the best team in the regular season — thanks to their late push to secure the No. 1 overall seed on the final day of games and by winning the Commissioner’s Cup Championship in July — the title race seems as wide open as ever. The Sky only got better after winning it all last season and have all the tools to become the first WNBA franchise to repeat in two decades. The Storm and Mystics both know what it takes to be champions, while the Sun have been knocking on the door of hanging a banner for the past three years. Then there’s the lower seeds, like the Liberty and Wings, who have copious young talent to ensure they won’t be going down without a fight.

ESPN’s M.A. Voepel, Kevin Pelton and Alexa Philippou answer the most pertinent questions heading into the first round of games and make their predictions for which team will ultimately cut down the nets in September.

Mystics-Storm is unanimously regarded by our staff as the most competitive first-round matchup. What’s the top storyline you’re watching in the series?

Philippou: With a healthy Elena Delle Donne, the Storm-Mystics could be a semifinals or even Finals series — in fact, it was the Finals matchup in 2018. Instead, we get a first-round matchup between many of the same pieces that combined to win three of the past four titles (Washington in 2019, bookended by Seattle in 2018 and 2020). So many players have something to fight for or to prove: Delle Donne that she’s the same caliber of player she was before her onslaught of back issues; Tina Charles that she can win a WNBA title to solidify her status as one of the W’s all-time greats; all the while, Sue Bird could add yet another feather to her cap and ride off into the sunset with a fifth WNBA title to her name.

Pelton: Can the Mystics find enough offense in this battle of two of the WNBA’s top three defenses in terms of points allowed per 100 possessions? Washington cracked a 96 offensive rating just once in the three head-to-head matchups, not coincidentally the Mystics’ only win. Washington was 16-4 this season with an offensive rating of 100 or better and 6-10 when failing to reach that mark, so this could determine the outcome.

Voepel: How big of a series will Seattle guard Jewell Loyd have? She is coming off a season-high 38 points against Las Vegas in the regular-season finale after scoring just one point against the Aces on Aug. 7. When Loyd is scoring well, it makes the Storm so much more dangerous. But she will be going against a Mystics defense that is particularly tough on opposing guards.

Pelton: The Sky play like they did in June and July, going 18-4 after a slow start with Kahleah Copper returning late from overseas. Things have been shakier in August, with Chicago going 3-3 to drop out of the No. 1 seed.

Voepel: The Sky’s biggest strengths are their offensive flow and their depth, and they’re also a pretty good defensive team. If they play offensively to their capability, they have a good chance to repeat as champions.

Philippou: The Sky’s identity revolves around their smooth-rolling offense, as Voepel mentioned, but it’ll be interesting to see how they fare in their defensive execution in a series against some high-powered teams like the Aces or even the Storm given how their offense is clicking as of late (both those matchups would be in the Finals). Of note: In their playoff run last year, the Sky’s 94.2 defensive rating was the best of any team playing in the postseason.

Who is the hottest team entering the playoffs? And which team benefits the most from the new playoff format now that there aren’t single-elimination games?

Philippou: It’s quite literally the Aces, who are riding a four-game win streak entering the postseason with wins over the Storm (twice), Dream and Sky — all the more impressive considering they’ve been without two-time Sixth Woman of the Year Dearica Hamby most of that stretch.

I generally liked the idea of single-elimination games being included early in the playoffs, but the idea of this Washington team having to get through two of them just to reach the semifinals, where one fluky performance could have ended its season, is laughable; who knows if the Mystics will get past Seattle, but now they have a more fair shot of earning a spot in the semifinals.

Voepel: The Aces have looked to be on a mission and definitely appear locked in, so they are probably the hottest team. The series format is best overall for the league, and Seattle has to feel relieved that its season doesn’t come down to just one game against Washington.

Pelton: Relative to season-long performances, the Storm come in hottest. Yes, Seattle lost twice to Las Vegas in the season’s final eight days, but in between the Storm delivered two of their most impressive performances of the season to win at Chicago and blow out Minnesota in a key game for the Lynx. Seattle’s defense has been stout all season; only late in the year has the offense kept pace.

As for the biggest benefit, I’ll say the Mystics, who would’ve been looking at hosting Phoenix and then flying across the country to face the rested Storm in a single-elimination game.

Who might be the breakout player of the postseason?

Pelton: Rebekah Gardner. If you’ve been waiting for the playoffs to tune in, you might not realize that a 32-year-old rookie is playing a key role for the defending champs. Gardner merited selection both to the All-Rookie and All-Defensive teams, and the value of her length against smaller ball handlers might mean a key role for her as we get deeper into the postseason.

Philippou: For the record, I’m not sold on the Liberty being able to upset the Sky, but we might see some memorable performances from Sabrina Ionescu this postseason, especially considering the Liberty have two guaranteed games instead of 2021’s one-and-done outing. And I wouldn’t be shocked if French product Marine Johannes goes off with some crazy 3-point shooting for New York, either.

Voepel: Dallas guard Marina Mabrey has helped hold the Wings together while Arike Ogunbowale has been out with an injury. She had a career-high 31 points on Aug. 8 when they clinched their playoff spot and has averaged 20.9 points in Dallas’ seven games in August. The Wings will have a hard time trying to knock off the Sun, but Mabrey could have a chance to show how much her shooting and passing skills have meant to Dallas this season. She might only get one series to do this, so maybe that’s not “breaking out.” But like fellow 2019 second-round pick Sophie Cunningham of Phoenix, Mabrey deserves credit for defying the odds and not just earning a roster spot in an incredibly tough league, but really contributing to her team’s success.

Which higher seed can least afford to lose Game 1?

Voepel: None of the higher-seeded teams want to be in the position of having to win Game 3 on the road, but Seattle might find that especially daunting in Washington D.C. The Storm would like nothing better than to dominate their first-round opener and try to shut down any ideas the Mystics have about gaining the upper hand in the series.

Philippou: Aside from the Seattle-Washington series as Voepel mentioned — with Seattle’s league-leading attendance, the Storm won’t want to drop any game at Climate Pledge Arena — the Sun will be looking to take care of business at home. The Wings are a tough matchup for them and Connecticut will be looking to avoid the series shifting to Dallas. The Sun have the most regular-season home wins since 2017 and will surely look to take advantage of that track record.

Pelton: The answer is surely the Storm since any of the other three higher seeds would still be favored in the series despite having to win Game 3 on the road. Still, I think losing Game 1 at home would be a mental hurdle for the Sun given the team’s history of shorter-than-expected playoff runs.

Which teams will meet in the WNBA semifinals?

Which teams will meet in the WNBA Finals?

Which team will win the 2022 WNBA championship?

Who will be the WNBA Finals MVP?