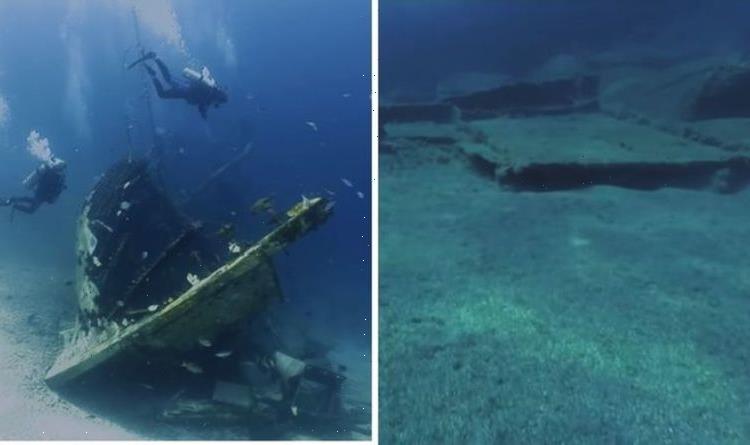 World War 2 was the deadliest conflict in human history with an estimated 70 to 85 million fatalities, a majority of which were civilians. More than 100 million personnel from over 30 countries were directly involved in the war, which saw countries throw all of their economic, industrial and scientific capabilities behind the effort. Both air and sea played a major role in the conflict. Tens of thousands of ships were wrecked. Off the British coast alone, thousands of wrecks line the seabed, having hit mines, been sunk, or met their fate in another way.

Thousands more sit in foreign waters around the world.

Yet, some of these ships, or at least parts of them, have started to mysteriously disappear in recent years.

The narrator of the documentary, which aired last year, added that these wrecks seem to have been raided by “human hands”.

Known as “metal piracy”, salvagers view the wrecks as goldmines.

Dr Michael Tuttle explained: “A shipwreck represents a literal treasure trove of metals. Brass, copper, there are tonnes and tonnes of metals in these things.”

The wartime wrecks contain bronze propellers and casings on the electrical equipment.

The metals on these ships can be extremely valuable.

Marine archaeologist Rob Rondeau explained why: “This metal is highly valuable because most of it was produced before the Second World War.

“So it has what’s referred to as the ‘pre-nuclear signature’.”

The ships were made prior to atomic testing. This means it is free from background radiation.

Ms Goodman explained that these metals are called “low-grade metals”, and can be very useful for both medical and technological use.

They can also be used in modern scientific equipment.

The documentary’s narrator said: “Metals with little or no trace of radiation are able to produce more accurate readings for finely tuned instruments, from geiger counters to space sensors.

“So they command a very high price.”

According to a study in the Journal of Maritime Archaeology, authored by international law lecturer Kim Browne in 2019, salvagers can make a fortune from the wrecks.

One bronze propeller can fetch tens of thousands of dollars, while an entire wreck might be worth in excess of one million dollars (£743,771).

Some ships have been found cut in half, while others have disappeared entirely.

“They have to have the right equipment, it’s not cheap.

Policing this, however, is much more difficult. Many of the wrecks lie in the territorial waters of countries that feel they were victimised during the war.

The countries to which the wrecks represent a troubled history often feel little incentive to protect them.

The US, the UK, the Netherlands and Japan have all argued that the wrecks have historical importance, and many still contain the remains of sailors or pilots who died in service.

The sites, therefore, are grave sites.

Mr Rondeau told the Discovery Channel: “It’s important to remember that these are cultural heritage artefacts that need to be preserved for everyone.”

A further problem posed by these wrecks is that some contain dangerous explosives or toxic chemicals, which might threaten the surrounding ecosystem.

Those removing items from the wrecks illegally will have zero incentive to take proper precautions, Ms Browne wrote in the study.

She argued international law should be changed to protect these wrecks for future generations.