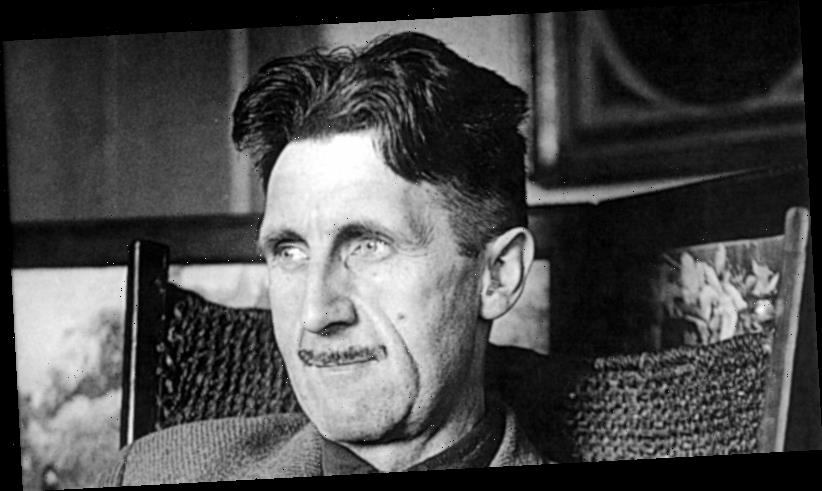 Chances are, you've seen George Orwell's name thrown around a lot in the past week on social media, either by conservatives invoking his name with sincerity or by liberals poking fun at conservatives for its misuse.

On Friday, when Twitter permanently suspended President Donald Trump's Twitter account due to the risk of incitement to violence, his son Donald Trump Jr. was quick to invoke George Orwell. "We are living Orwell's 1984," he tweeted. "Free-speech no longer exists in America. It died with big tech and what's left is only there for a chosen few."

When Senator Josh Hawley, lost his book deal with Simon & Schuster following Wednesday's Capitol Hill riot and his widely-perceived role in helping to incite it, he had some words for what he called the "woke mob" at his would-be publisher. "This could not be more Orwellian," he tweeted in a statement. 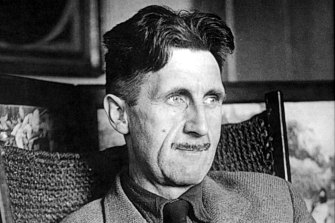 “Orwellian” is probably the most widely used adjective derived from the name of a writer. Pictured is George Orwell.

Cheeky Twitter users have been quick to criticise the invocation of Orwell from people who, like most of us, probably haven't dusted off a copy of 1984 since high school.

"As we all remember, Orwell's 1984 is about an old man who gets banned from a bird-themed social media site after regularly encouraging violence," tweeted the progressive think tank Gravel Institute.

"Starting a Go Fund Me to buy conservatives some Orwell books," wrote @ClueHeywood.

1984 rose to the top of Amazon's top-selling book list over the weekend. On Monday, it reached the No. 1 spot. Not bad for a book published in 1949. Too bad few people citing the book's dystopian horrors in earnest seem to understand the usage.

"It tends to be a kind of catch-all for repression," says David Ulin, associate professor of English at the University of Southern California and former book editor of the LA Times. He's read and studied Orwell's works extensively, and he finds Hawley's and Trump's Orwell name-checking not just inaccurate, but ironic.

"There's a real irony in the fact that someone who paid such attention to clarity in language – Orwell's whole thing was about transparency in language, that language needed to be absolutely clear like a pane of glass – that a writer like that becomes a rhetorical tool for the people who would have been at the point of his lance," Ulin says.

"It's actually almost counter-Orwellian," says Pallavi Yetur, a practicing psychotherapist with an MFA in creative writing whose critical thesis was on Orwell and how his life experiences formed the way he thought about government. "In fact, Donald Trump Jr.'s tweet is Orwellian because he is using language as a way to control people's opinions about something that's happening in his favor, and that's propaganda."

"Orwellian" is probably the most widely used adjective derived from the name of a writer (Kafkaesque might come close), yet so many are using it wrong. It helps, first, to understand who Orwell was and the deeply held political convictions that fuelled his writing.

Orwell hated fascists so much he went to war with them

"Every line of serious work that I have written since 1936 has been written, directly or indirectly, against totalitarianism and for democratic socialism, as I understand it," Orwell wrote in his 1946 essay handily titled Why I Write. That was the year Orwell joined a leftist militia to fight in the Spanish Civil War against fascist Francisco Franco's military uprising in Spain. 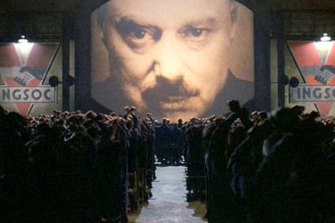 A still from the movie 1984, showing Big Brother and the masses.

Eric Arthur Blair (Orwell was his pen name) was born to British civil servants in India, a member of what he called the "lower-upper-middle class." A deeply moral thinker and writer, Orwell didn't sit comfortably in his privilege, but was a committed democratic socialist, "along the lines of a Bernie Sanders," as Yetur describes him. He was also, Ulin says, a brilliant critic of pre-World War Two British liberal isolationism.

So when war broke out in Spain, Orwell saw it as his moral duty to kill some fascists. "When I joined the militia I had promised myself to kill one Fascist – after all, if each of us killed one they would soon be extinct," Orwell wrote. He got shot in the throat by a fascist sniper and nearly died.

His experience in the Spanish Civil War also wised Orwell up to the failures of Soviet communism, whose tactics of oppression and obfuscation mirrored those of the fascists they were fighting despite existing on opposite ends of the political spectrum. The opposing ideologies were two sides of the same totalitarian coin, each flavour of undemocratic authoritarian control intolerable to Orwell. "He was very wary of totalitarianism from the left as well as from the right," Ulin says.

Orwell's experience in the Spanish Civil War crystallised his politics, which formed the literary fabric of everything he would write thereafter.

So what's 1984 actually about and what makes a thing "Orwellian"?

1984 is often reduced to its base components, the catchphrases and slogans of the fictional government in Orwell's dystopian allegory for Soviet totalitarianism. The takeaway is often: Oppression bad, liberty good.

But Orwell's book is much more sophisticated. Orwell was interested not just in communicating the badness of totalitarian regimes, but also dissecting how they succeed through the manipulation of language.

"He was really most concerned with language and how language was used in a propaganda type of way or as a means of control," Yetur says.

Orwell observed that totalitarian governments, whatever their ideologies, cannot simply impose their wills; they must indoctrinate. Their success requires complicity. "He's really sharp on the ways in which people get indoctrinated," Ulin says.

Which brings us to the term "Orwellian." If Hawley's book deal getting cancelled and Donald Trump getting booted from Twitter aren't Orwellian, what is?

"'Orwellian,' in the most orthodox way, is about language as a means of control," says Yetur. "A Nazi propagandist like Leni Riefenstahl, that would be very Orwellian, because that's somebody who's using words to invoke feelings, to invoke allegiances, to discredit enemies."

"Orwellian" is not just applicable to the fascists and communists of Orwell's era, though. Ulin thinks "1984" is relevant to our current political moment. "There are aspects of the novel that are quite reminiscent, interestingly enough, of Trumpism, even though (Trump's) right wing," Ulin says. "Things like the dissemination of false information, the use of information to obfuscate rather than illuminate."

He also sees shades of 1984 in social media. In the book, Orwell invents "Two Minutes Hate," a daily event in which video of the enemy is publicly screened and the audience is encouraged to stir itself up into a froth of rage. "That kinds of reminds me of what we see in terms of social media mob mentality, and this extreme QAnon type of conspiracy theorists," Ulin says, "working on people's most negative and virulent emotions and using that as a way to control them but also to make them feel as if they are being heard."

What else you should read by Orwell

1984 and Animal Farm are Orwell's greatest hits and certainly worth revisiting (or reading for the first time; we won't judge). But Orwell was also a prolific essayist, literary critic, journalist and columnist, and much of his best work is in his less flashy nonfiction. If you want to expand your understanding of Orwell and better appreciate the philosophy of one of our most enduring modern political writers, these works are good starting points:

Homage to Catalonia: Published in 1938, this personal account of Orwell's experiences fighting in the Spanish Civil War is essential to understanding every work that followed. "If you had asked me why I had joined the militia I should have answered: 'To Fight against Fascism,'" Orwell wrote, "and if you had asked me what I was fighting for, I should have answered: 'Common decency.'"

Down and Out in Paris and London: Orwell lived in purposeful poverty for a time in Paris and London, two of the world's wealthiest cities, and wrote about his experiences in this 1933 memoir. "He made the choice to go to Paris and London and work low-end jobs and live that life, to immerse in it, because that's where his sympathies were," says Ulin.

Politics and the English Language: This 1946 essay is a short and essential read on the importance of clarity of language. It was central to both Orwell's writing and politics, as he saw the two inextricably linked. Corrupt language, Orwell wrote, can also corrupt thought. "Political language – and with variations this is true of all political parties, from Conservatives to Anarchists – is designed to make lies sound truthful and murder respectable, and to give an appearance of solidity to pure wind."