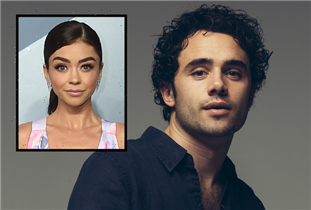 Created by Once Upon a Time writer Brigitte Hales with OUAT creators Adam Horowitz and Eddy Kists also serving as EPs, Epic is described as a romantic anthology “that reinvents fairy tales for a new audience.”

As recently reported, Modern Family‘s Sarah Hyland will play Rose, a princess who’s about to marry her proverbial Prince Charming, “but her fairy tale gets upended when he has second thoughts.”

TVLine has learned exclusively that English actor/singer/songwriter Toby Sebastian, whose previous credits include an arc on HBO’s Game of Thrones, has joined the pilot as Rose’s husband-to-be, Philippe. Described as the quintessential storybook prince, Philippe is following what he believes is his destined path to True Love when he finds himself at a surprising crossroads, leading him to question everything he held dear.

The cast for Epic, which will be under consideration for midseason, also includes Brittany O’Grady (Little Voice) as cynical princess Luna and Eleanor Fanyinka (Holby City) as a mysterious character known as The Seer.

In addition to his aforementioned run as Game of Thrones‘ Trystane Martell, Sebastian’s previous acting credits include the Andrea Bocelli biopic The Music of Silence (directed by Academy Award nominee Michael Radford and also starring Antonio Banderas) and the miniseries All You Need Is Me.