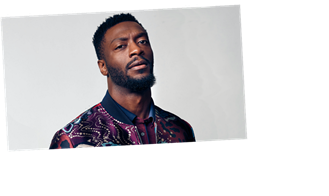 You could say Aldis Hodge is good at filling big shoes. After portraying the likes of MC Ren in Straight Outta Compton and Brian Banks in the NFL player’s biopic, Hodge stars as the legendary running back Jim Brown in One Night in Miami, alongside Malcolm X, Sam Cooke and Muhammad Ali.

Directed by Regina King, the film is a dramatized account of an evening the four friends spent together in the ’60s. (Kingsley Ben-Adir, Leslie Odom Jr. and Eli Goree play the other legends.) It’s a story of race and civil rights, about art and fulfillment, brotherhood and love.

Next, Hodge will take on something new — but equally big — in the DC superhero movie Black Adam, in which he’s been cast as Justice Society of America leader Hawkman opposite Dwayne Johnson’s titular antihero. For the actor, both projects check off items on his bucket list.

Ahead of One Night in Miami‘s release, Hodge hopped on a Zoom call with ET to discuss getting into character as Jim Brown and why he’s excited to whoop somebody’s butt in Black Adam.

ET: I have to assume when the pitch is, “Regina King is directing and you’re playing Jim Brown,” it’s not a difficult decision to make.

Aldis Hodge: No, it’s not. [Laughs] But that is not how the pitch went. The pitch went, “Regina is directing and she wants to see you audition.” I was like, “OK. I’m getting my audition goin’,” you know what I mean? That’s what I loved about it, we all had to earn it. We all had to work for it, man. She was really calculated about how she saw each actor, because she wanted to make sure that we all had the essence of the men that we were playing. After the audition, when they said, “Regina is directing and you playing Jim Brown,” I was like, hoo!

There’s the essence, as you said, but as you were doing your preparation and your research, was there something that became your entry point into Jim? Whether it was something you learned about him or a physical mannerism you observed that allowed you to access him?

With all that I learned, the thing that I gravitated towards most when trying to feel like him on set was the voice. I would run that voice, I would get into a pattern and I was like, “All right, I got it.” Because it’s weird, once I felt like I was in the voice, the rest of the body mannerisms just sort of followed naturally. I didn’t really have to think about it too much, because I studied him vehemently. I studied his ticks and every video that I saw of him just moving and his voice, I replayed that voice in my head constantly. Even on set, it was constant just to make sure that I was maintaining consistency. That was what I was most nervous about was making him sound real, because the ’60s has a different sort of energy. It’s a different swag with how people talk and even the pace can sound a little character-y, but it’s, like, nah, that’s how it really was back in the day. “Hey, man, cat, daddio,” you know what I mean? It’s a whole different thing, but how do you make that natural?

Is the voice something that became easy for you to slip in and out of, or were you talking as Jim Brown between takes?

Sometimes I stayed in it. I never took the approach of being Jim in my mind. Like, “Yo, you gotta address me as Jim.” No. But I stayed in the voice. I would talk to people on the phone and I’d be like, “Hey, Ma, how you doing?” And she’s, “Hey?” and I was like, “I’m at work and I’m doing my thing, and just don’t be weird, but it’s me.” But the thing that I loved is that Regina never called us by our names. She always said, “Hey Jim, hey Cassius, Malcolm, Sam.” Of course, she knew who she was talking to, but she did that to help us stay in our rhythm and never break mentally. And, honestly, I feel like the results were incredible.

You and Kingsley and Leslie and Eli are playing these absolute icons, but in the process, you are getting to work with your peers who are this new class of truly exceptional talents. What did that mean to you?

For me, it was going to work every day. We had work to do, so everybody was hustling. We didn’t know what it was going to end up being. But when I go to work, I zone out, and I ignore any ideas of what could be. I’m just focused on what we have to do and making sure that we get to the end of the day. That’s how I look at it, man. I’m hustling. I’m hustling. So, it was great to be in the throes and to see the results of it. I watched the film and I was really pleasantly surprised by the performances. When you’re working with people, you don’t always get to see certain things, because your mind is thinking 24/7. When you get to sit back and watch it, you’re like, “Oh man, this is actually fire!” So, for me it was really a pleasant surprise to see the results, but also a pleasant experience to do the work.

Do you now have a standout memory of being directed by Regina?

There’s definitely a few. I feel like one of my standout memories was the scene between Kingsley and I, when we were trying to figure out what our tone was for that scene — because it’s Jim and Malcolm having a conversation at the table and Jim is trying to explain Sam’s agenda to Malcolm — and Regina, she just has such a way about her with allowing us to just feel it and be in it. The tone, at first, started off differently, and then Kingsley and I kind of worked it through, we just rehearsed and tried it a few different ways. We got this one take where it just hit — which is the take that you see on camera — and we said, “Regina, how did you feel about that?” And she said, “It’s beautiful. Leave it. Leave it as is. It’s beautiful.” And we left it at that. She did that constantly throughout the entire shoot, reaffirming our choices, making us feel comfortable, making us feel like it was a real collaboration and helping us to understand the emotional path that this film was on. Because at the end of the day, if you really watch it, this is not about any one of us individually. This is about all four of us collectively. The conversation is the star of the movie. We all had to play our moments to make that star shine, and she kept us on the path with making sure those moments popped where they needed to pop. 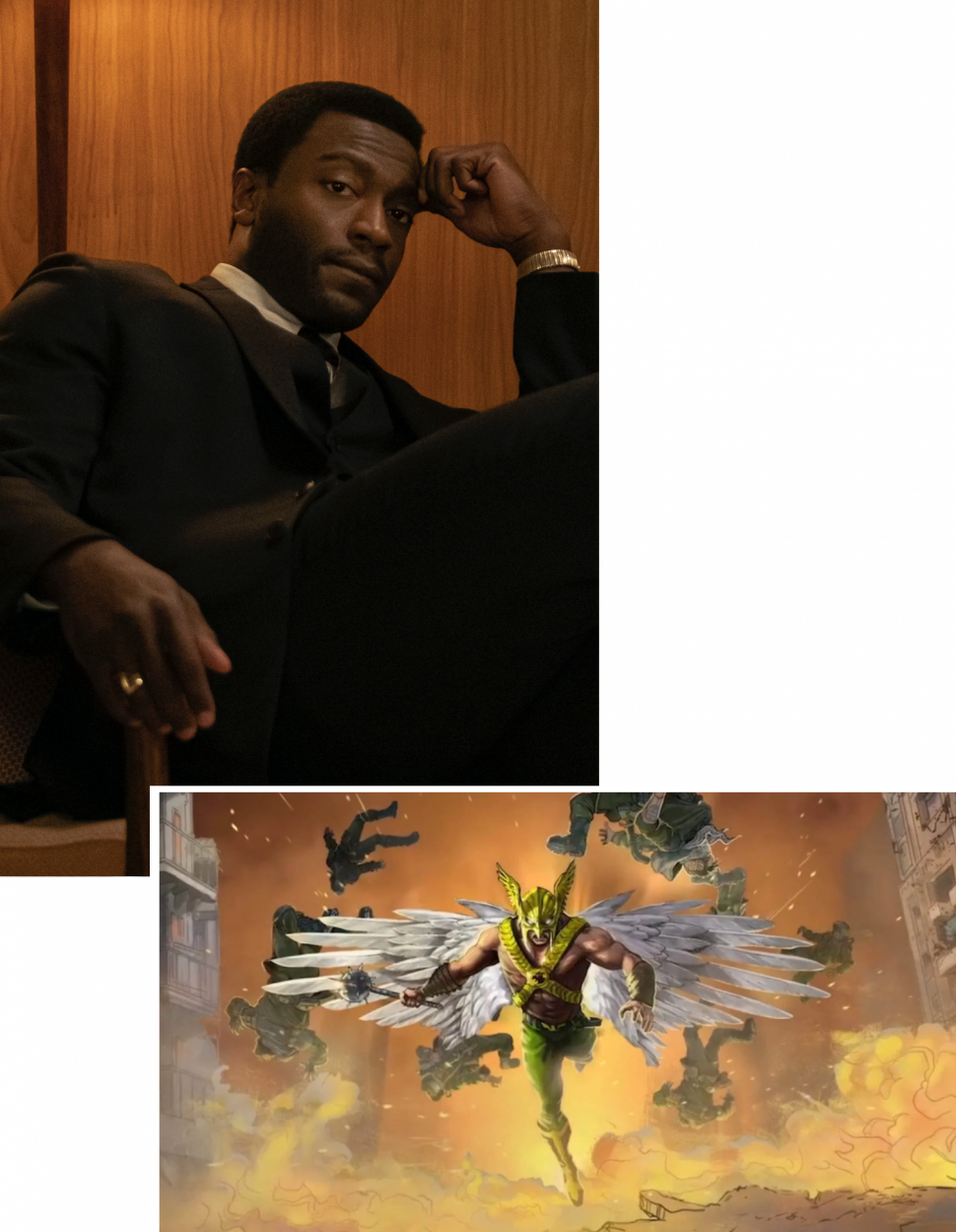 Scrolling through your IMDb page, I love how wide-ranging your roles have been. Now, you’re going from this to playing a full-on superhero. With those, you don’t just sign on for one movie. You’re becoming this character within a major franchise.

What made you say yes to that?

What made me say yes?! [Laughs] Oh, you’ve been trying to do an action film — a superhero thing — for years, here you go. Do you want it? There’s some actor, some new actor playing in it. His name is Dwayne Johnson. Do you want to play a role aside Dwayne? Man! I’ve checked boxes on my list of things to knock out as an actor. Like, oddly enough, I wanted to do a sort of scary-suspense thing, and then I had the opportunity for Invisible Man. And it turned out really great, and I was like, “You lucky bastard.” I wanted to do something really evocative culturally, and One Night in Miami, boom. Then I always wanted to do an action film. I always wanted to get in there, because in most projects, I’m getting my butt whooped if there’s a fight, and I just don’t understand! Big as I am, I don’t get it! This checked off so many boxes, but it’s like, wow, this is weird.

I remember when I got the call from Rock, and he told me, “Welcome to Black Adam.” I almost didn’t believe it. It felt like winning the lotto, because I’ve been hustling for something like this for so long. But to be in this position this way, in such a transformative role alongside an entertainer like Dwayne Johnson, given his magnitude where he’s at in his career, this gives me so much room to learn. This is so much just education on a plate for where I’m trying to go in my career. So, I’m like, it couldn’t have happened any better for me right now. I’m still trying to figure out how to take it, but I’m just really grateful, man. Just like this experience for One Night in Miami with how we’ve been received and how people really soaked it up, it’s a dream come true. The same can be said for the opportunity laid before me with Black Adam. It’s literally a dream come true.

So, the movie where you’re not going to get your butt whooped is the one where you’re going toe-to-toe with Dwayne “The Rock” Johnson?

[Laughs] Look, I can’t say! I can’t confirm or deny what it is. I’m just saying, if I get whooped, I’m going to at least whoop somebody too, you know what I’m saying? I’m not saying anybody in particular, it’s just I’m not going to be losing every fight. At least I shouldn’t be, theoretically, losing every fight because that’s not how it go down in comics! That’s what I’m sayin’. You feel me?

I feel you. And I will leave you with a “good luck” as you start training for that. I look at Dwayne’s Instagram and I think one of those cheat days alone would take me out.

It’s insane. It’s insane, man. I am trying my best and my damnedest. I love training, but, like, he’s an athlete. He lives that. I grew up a fighter. But you don’t have to train like that if you’re a fighter. You gotta switch it up. I’m switching it up, and it’s an experience.

One Night in Miami premieres on Amazon Prime Video on Jan. 15.