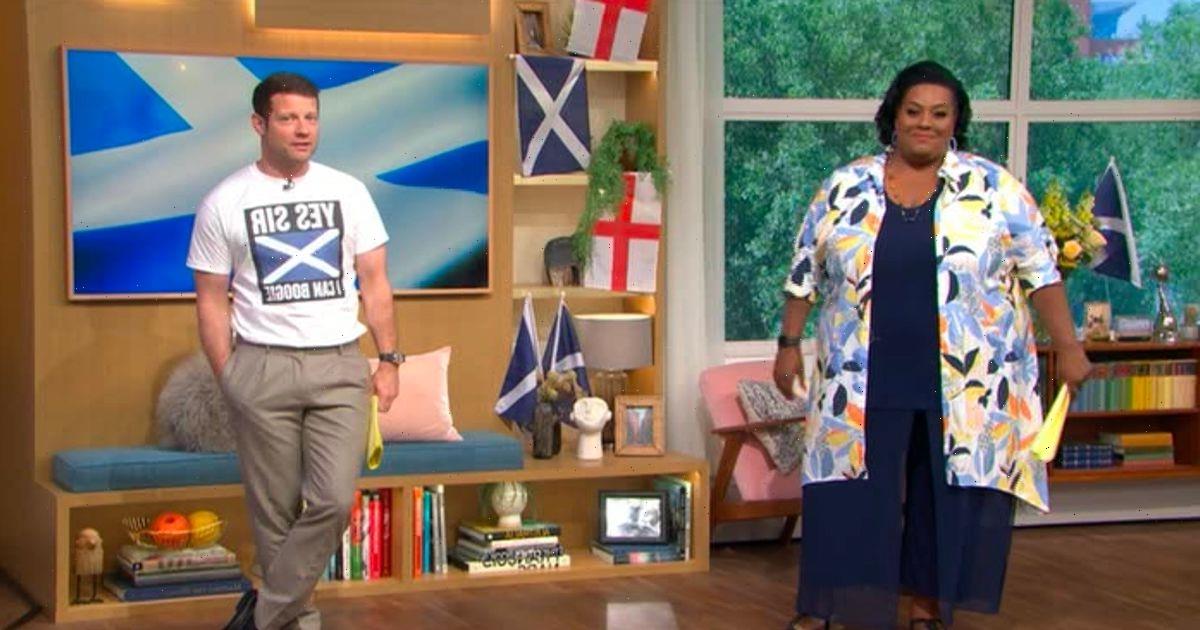 This Morning viewers were left divided after the hit ITV show decided to host a special football episode.

Alison Hammond and Dermot O'Leary hosted an upbeat show focused around the impending clash between England and Scotland in the Euros.

The two sides will take to the pitch at Wembley on Friday evening – with kick off set for 8pm.

Getting into the spirt, the ITV studio had been decorated to the max with flags and balloons to celebrate the game.

Alison draped a giant England flag over her shoulders while Dermot opted for a Scottish t-shirt.

After chatting about the match, they then cut live to an estate which was decorated with over 400 England flags to chat to the residents about the game.

She asked viewers to call in with their football fallouts.

One viewer moaned: "Enough of the football chat now half of us don't give a s*** #ThisMorning."

Another added:"Bombarding us with football throughout the entire first hour of the show and then doing a phone in to see whether football is affecting your home life #ThisMorning."

A third chimed in: "Even the phone in is football related.#ThisMorning" before three angry face emoji.

A fourth vented: "This Morning is absolutely unbearable today.

"We get it there’s a football match on later! Surely they can’t fill two and a half hours with this crap?"

However, not everyone was unhappy.

Many viewers were loving the footy takeover.

One fan wrote: "Can’t believe there’s actually people moaning at people enjoying the football and filling pubs tonight, on this hashtag, bore off and let people enjoy themselves ya snowflakes #ThisMorning"

Around 20,000 Scottish football fans descended on London on Thursday evening ahead of the sporting showdown.

While the game is taking place at Wembley due to Covid the stadium is operating at a reduced capacity so many fans were unable to get tickets despite making the journey to the capital.