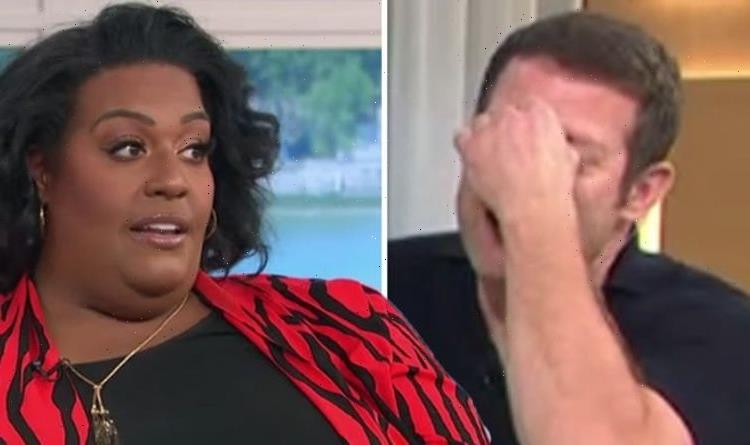 Alison Hammond and Dermot O’Leary spoke to Simon Calder on Friday’s This Morning as the presenters quizzed the travel expert on the changes the Government is expected to make to travel restrictions. However, Dermot cheekily hit back at Alison when she pointed out he’d brought the interview to an end before she’d had a chance to ask him one particular question.

After speaking to Simon, the hosts were joined by Nick Ferrari and Gyles Brandreth for the Morning View.

The guests kicked off the discussion by discussing Simon’s comments on the possible changes to travelling abroad.

Alison said: “I wanted to ask [Simon] about hotel quarantine and then you got rid of him.”

“We had Gyles and Nick Ferrari here you can’t keep Ferrari waiting he’s there in his [LBC] studio,” Dermot replied.

“Nick’s thinking, ‘When do I get out of here?’ He can’t be waiting for you to speak to Simon Calder about hotels.”

“Morning Nick, lovely to see you,” Alison said and Dermot added: “What’s your take on it?”

“I agree with Gyles,” Nick began. “This is hopefully another step as we emerge.

“I was struck by something Simon Calder said and I’m lucky I’ve been out of the country on one occasion.”

“A holiday is what we look forward to, we put in the shifts throughout the year and we get with our husbands or our wives or our children and we go away,” he continued.

“It gives you something that drives you through the cold autumn nights so if you want to holiday in the UK that’s great.

“But if you want to go the Med then let’s get there because it’s something that actually illuminates your life.

“So it was great to see Simon Calder in Newcastle airport with that report.”

“What about the PCR tests do you think it’s a good idea to scrap them altogether?” Alison asked.

“I think when an inquiry is held, the Government has got a lot of things right we developed a vaccine and we live in a country where sane people realise they should have the vaccine.

“But when the inquiry is held I think the way that some of these companies gave these PCR tests was not regulated enough.

“It was rushed through too quickly and it wasn’t properly regulated,” he added.

Earlier in the show, Simon hinted at the changes the Government could make to travel restrictions.

He said: “We’re going to hear I hope that the red list will be reduced, please don’t book anything on what I’m saying it’s pure speculation but it could mean that Turkey opens up.

“You’re going to be thinking, ‘Wait a minute it’s late September’ but airlines are standing by to put flights on.”

This Morning airs on ITV on weekdays at 10am.