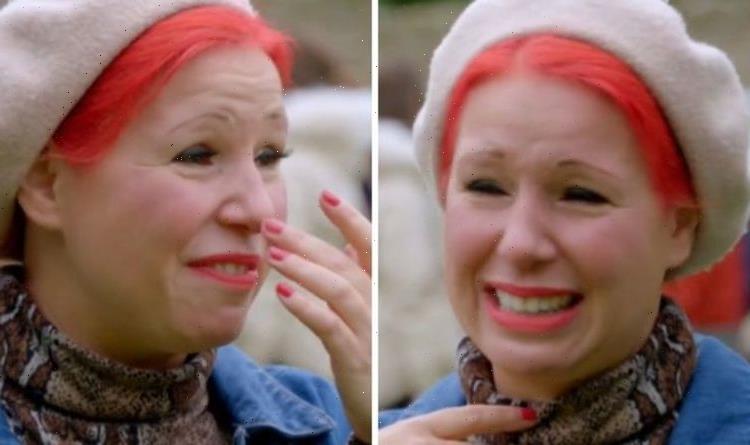 Escape To The Chateau: Angel emotional over success of party

Escape to the Chateau series eight returned to viewers screens following the journey of Dick Strawbridge and Angel Adoree renovating their French Chateau. In Sunday night’s episode, Dick and Angel decided to throw a garden party for their children after two years of not being able to properly socialise with their friends. After the success of the party, Angel was seen getting emotional at the freedom her children and their friends have due to their home.

For the first time in two years, Dick and Angel decided to open their doors again and offer their children’s French friends the best of the British, a traditional garden party.

Complete with tea and cakes, jelly and ice cream and garden games, Angel and Dick discussed how they were going to make the party one not to forget for their friends.

Dick said to Angel: “I need to know before we go any further what you’ve told the children?”

Angel giggled and replied: “I haven’t told them much because we haven’t had that conversation yet, but I have told them we are having a garden party number one.

“And a tea party number two, ok maybe I have told them a couple of bits,” she laughed after seeing Dick’s initial reaction.

Before continuing their conversation, Dick confirmed: “Garden party, tea party, get it all off of your chest now.

“And that they can invite who they want number three,” after a silence, Dick remarked: “Did you really just say who they wanted?”

“Well, actually, I think they’ve had nearly two years of their friends of not being here, and this is quite a big deal for them,” Angel justified.

Dick agreed and said: “Basically, they can invite who they want, I have a slight issue with anarchy, ok it’s dependant on the weather if it rains, it could be very interesting.”

The pair transformed their garden into a wonderland for Arthur and Dorothy’s and their friends, which included buried treasure, traditional games with tea and cake in the orangery.

As the party drew to a close, Angel reflected on the success and the memories her children and their friends had made.

She said: “I’ve not seen the kids, they are so happy, it’s wet, it’s damp, but it’s fine, the kids and the adults they are all having fun.

“They’re playing, they’re interacting, the kids haven’t had that in a long time, I’m not just talking Arthur and Dorothy I’m talking all of the kids.

“Things are slowly relaxing, and I think this is, this is the first bit of normality they’ve had, I’m a bit knackered.

“Everyone is having such a lovely time, and I’m properly chuffed, I cry at all events! But this is super lovely!” she exclaimed.

Elsewhere in the episode, Dick and Arthur were making signs for each activity at the party, a job that requires their imagination and artistry.

Dick turned to his son and said: “If I was to draw something that looks like a very big kidney, with a hole in it, coloured with pink on it, and then here we lay across it a paintbrush does that look like a pallet?”

Giggling at his dad’s humour, Arthur replied: “Mmm no, it looks like somebody’s kidney, but it’s horribly infected.

Drawing one for the aromatherapy table, Dick said: “Shall we draw a nose, with nose hairs, I don’t think that’s what mummy had in mind when she said aroma table.

“Let’s put a moustache on, I just feel like you’re getting me into trouble, if that doesn’t say aroma to you,” Dick finished with Arthur giggling to his dad.