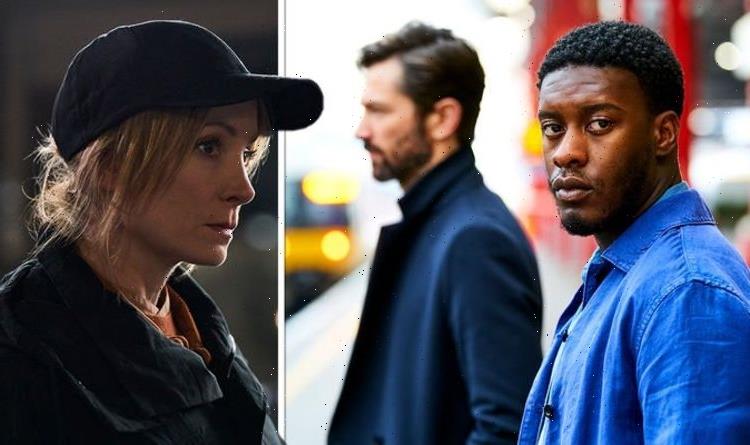 ITV’s Angela Black airs its season finale on Sunday night and fans are keen to see how the gripping story will conclude. Viewers have been following Angela’s (played by Joanne Froggatt) dramatic journey as she desperately attempts to escape her abusive husband Olivier Meyer (Michiel Huisman). Olivier currently has sole custody of their two children after framing his wife with the help of Theo Walters (Samuel Adewunmi) who was previously using the fake name of Ed Harrison. Angela’s been trying her best to find evidence against Olivier and Theo, will she manage to expose them both with a twist in the final episode?

In a recent interview with Express.co.uk and other press, Angela Black director Craig Viveiros opened up about the thrilling plot of the series.

He praised the series writers Harry and Jack Williams for creating such an engaging storyline.

“The brothers are so skilled at kind of intertwining the social issues with a good entertaining story,” he said.

Detailing how gripping the plot is, Craig remarked: “I think definitely this show will hopefully keep people’s bums on seats and you know, keeping them tuned in for the next episode.

“It really is such a unique hybrid of different styles and genres that keeps twisting keeps changing.

“If it’s doing that as a reader when you’re going through the scripts, I think now, when everything else that’s kind of been attributed to the story, hopefully, fingers crossed, audiences will love it,” the director said.

As Craig highlighted the “twisting” and ever-changing nature of the plot, this could indicate fans will see a shift of power in the final episode.

Could this mean Angela will finally be able to expose Olivier and Theo for their crimes?

In episode five, Angela pieced together the events of Halloween night, uncovering how Theo and Olivier teamed up against her.

She learnt Theo’s business was torched on Halloween, meaning he received a huge insurance payout, saving him from financial ruin.

Angela also looked at Olivier’s bank statement from the night and discovered he bought canisters of petrol from a nearby gas station.

She swiftly realised it was Olivier who torched Theo’s property as a favour, saving him from financial ruin, and in return, Theo impersonated a hit-man “Ed” in a bid to frame Angela.

When Angela visited the petrol station to gather evidence, the CCTV had been wiped and the attendant beaten up.

However, fans seem to think there’s more CCTV evidence that could prove Olivier and Ed’s crimes.

The penultimate episode finished with Angela arguing on the doorstep of Olivier’s house.

Olivier eventually confessed to setting her up, before threatening her and turning violent.

However, some viewers took to Twitter to point out that Olivier had a doorbell with a CCTV camera that would have picked up the interaction.

@Twiss95 wrote: “Interesting those cameras he has in his office would’ve picked up him grabbing her by the throat… That could be pivotal last episode? #AngelaBlack.”

@Felstedboy remarked: “#AngelaBlack Wasn’t that door way at his house covered by CCTV? when he had her by the throat.”

“What he just did to her should be in the home cctv just as where she saw him at the door with the Policeman! Gotcha! #AngelaBlack,” @stevie5667 added. (sic)

Could the final episode see Angela get the footage from the doorbell camera and take it to the police?

Many fans on Twitter are desperate to see her get revenge on Olivier and Theo.

@NatalieCKJ posted: “Oh revenge will be sweet, I can just feel it #AngelaBlack.”

“#AngelaBlack Now she knows the score, I think this is going to get very interesting. I think she’ll ‘turn the tables’. Hope so! Hope it’s revenge time on ‘Theo’ (the fake pi) too!” @Alan1_iow said.

“#AngelaBlack Aww that was a brilliant episode again. Angela has to expose him,” @OliviaG37717638 added.

Will she expose Theo and Olivier with the CCTV evidence? Viewers will have to tune in to find out.